With Tandy failing to escape Andre and Lia, she finds herself in the heart of their operation, namely at New Orleans’ Vikingtown Hotel. Tyrone and the Johnson family return to the spotlight in this episode too, leaving, “Vikingtown Sound” with plenty to explore and talk about, especially as Adina debates what to do about the captive Connors, who now awaits his fate in the Johnson house. There’s plenty of drama to sustain this episode, though after the previous and superb Tandy-focused episode, Cloak & Dagger becomes a little more uneven in, “Vikingtown Sound”, having to stretch the story just a bit in order to keep the plot moving at a good clip.

Fortunately, Andre remains a pretty compelling new human take on Marvel villain, D’Spayre, having more interesting debates with Tandy about the implications of his human trafficking operation, particularly when it appears as if the captive women are treated well, and free to go whenever they please. Lia is the one who actually oversees the captives while Andre is out, giving Andre a chance to meet Tyrone as well. In hindsight, it should have been a tip-off during Tyrone’s fake death in the previous episode that Andre shouldn’t know Tyrone’s name, since the two never actually have met before now, though I guess Andre sifting through Tandy’s memories also could have explained that. Either way, the meeting between Tyrone and Andre is appropriately tense, and eventually leaves Tyrone dispirited, and believing that Tandy has abandoned him. 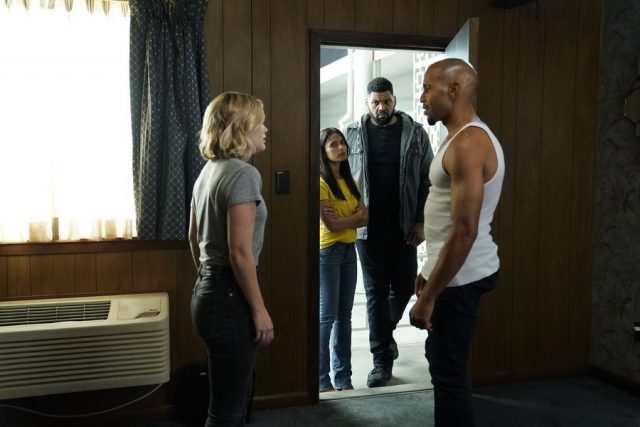 Again though, this doesn’t totally fly. Obviously, this drama isn’t going to stick, since there’s no Cloak & Dagger without the unified drama of the Divine Pairing. This also leaves some questions regarding exactly how Andre’s powers, and his enchanted record store, actually work. Somehow, for example, Mayhem is able to slip into Andre’s record store from the Darkforce Dimension, and play different records so that Tyrone doesn’t lose the motivation to look for Tandy. Wait, she can do that? As happy as I am to see Mayhem finally becoming a useful part of the show again, the rules with Andre’s powers feel a little inconsistent here, as if the show is making them up as it goes along. Plus, Tyrone naturally restoring his lack of faith in Tandy before long, even with Mayhem’s help, further begs the question as to why this whole subplot with Tyrone happened in the first place, beyond merely wasting time.

Andre’s trafficking operation doesn’t always manage to feel that consistent either. Logically, Andre, Lia and their thugs shouldn’t want the women to go free, but then why does Lia make a big show to Tandy that anyone is free to go? Obviously, they aren’t, or Tandy would just be free to go. Moreover, the show’s latest excuse for Tandy to lose her powers doesn’t really make total sense when you think about it. Tandy’s abilities being powered by other people’s hope is established, and I thus buy her losing her powers in the Darkforce Dimension for that reason. The problem though is that Tandy somehow can’t utilize the hope of Andre, Lia or their enforcers, who wouldn’t be doing what they’re doing if they didn’t have hope to burn. There’s just too many holes in Andre’s operation at this point, and Tandy really shouldn’t have this much trouble breaking out, even with her roommate being forced to blow paralytics in her face, which barely affect Tandy in the end anyway.

Fortunately, the episode is at least effectively salvaged by some strong subplots with the supporting cast. Chief among these is Adina preparing a seafood recipe as a means of sorting through her thoughts, as the captive Connors watches her cook. Adina says in no uncertain terms that she’s struggling with the forces of her two sons, since she knows that Connors is the best means of Tyrone ever being able to live a normal life again, though she also wants to kill Connors, as justice for Billy. Connors filling Adina in on his operation, while it appears as if Adina could snap and kill Connors at any moment, is very effectively tense, and riveting to watch. In fact, I definitely could have done without Otis forcibly intruding at what point, and almost leading to an escape attempt by Connors (huh? Doesn’t he want justice for Tyrone and Billy?), since this merely takes away from the storyline, which Adina owns with aplomb. In the end, Adina seemingly decides to spare Connors, after he tells her where he buried Billy’s body, but it certainly seems like the drama for both Connors and the Johnson family is far from over.

Andre also makes a surprising new connection in this episode, namely by visiting Chantelle, to inquire about a veve that he keeps seeing. This is likely a byproduct of Andre and Tyrone realizing the truth about each other while shaking hands, with Andre bringing Chantelle into his record store, to once again reveal his true colours. Fortunately, this only makes Andre a more intriguing and morally ambiguous villain, as he labels his human trafficking operation a, “Short-term solution” to his headaches, and wants to find a long-term solution, so that he doesn’t need to capture young women anymore. Chantelle makes mention of Andre possibly ascending to become a ‘Loa’, possibly indicating that he could become more supernatural in nature eventually, a la Marvel Comics’ version of D’Spayre, but ultimately, Andre opts to flood Chantelle with sad memories of Evita’s birth. This overflow of negative memories actually kills Chantelle as well, in a shocking turn that proves nicely unexpected, and leaves Tyrone in particular without a key outlet of support in the coming battle.

“Vikingtown Sound” definitely didn’t have airtight storytelling, with Tandy and Tyrone being the weak links in their own show in this case, but fortunately, the standout drama with Adina, and the great encounter between Andre and Chantelle, ending in Chantelle’s unexpected death, helped to make up for this. Inevitably, Tandy does at least inspire her roommate enough to get her powers back (even though she never should have lost them to begin with), allowing her and Tyrone to once again come together, just in time for Tyrone to pass out and profusely leak Darkforce. I imagine that this means it’s time for another trip to the Darkforce Dimension, likely to pull Mayhem back to the real world, on top of saving Tyrone. Frankly, it feels a bit like Cloak & Dagger wrote itself into a corner with Tandy’s capture and Mayhem’s imprisonment, and had to invent some pretty clumsy excuses to reverse those story turns. This leads to a noticeably weaker episode than the rest of Cloak & Dagger’s second season has delivered so far, but hopefully, another trip into the Darkforce Dimension can restore some of that lost creativity and cleverness back to the series.