With every step the heroes take on Supergirl lately, it seems like they’re no closer to foiling Lex Luthor’s plot, even as all of the pieces of it are seemingly laid bare. “Red Dawn” thus focused on the only logical story device that it could have, being Season Four’s penultimate episode, and that’s the battle between Supergirl and Red Daughter, one of the final phases of Lex’s plans. Meanwhile, the excitement gets nicely maintained in some solid subplots, as the show’s other alien heroes band together to try and liberate the captured aliens from Lockwood’s compound, and Alex begins to piece together that her memories may be faulty.

As much as the storytelling is still plenty engaging in this episode, it came together a bit less tightly than the past few episodes offered here. There are a few hasty contrivances in the effort to move the characters to where they’re supposed to be for Supergirl’s fourth season finale, with some forced character turns that don’t completely hold up to scrutiny. The battle between Kara and her Kaznian clone certainly doesn’t disappoint however, and nor does an especially strong subplot with Lena, who is forced to enlist the aid of her criminal mother to try and save both James and Lockwood from the escalating Harun-El serum effects. Lena working to save Lockwood seems initially unlikely, but after Lena confronts Lockwood in a car park, only to discover that he knows nothing about working for Lex, and is gradually physically degrading from the serum’s effects, she starts to see Lockwood for what he truly is– A patsy.

Considering how high, mighty and dangerous Ben Lockwood was at the start of this season, it’s effectively tragic to see him weakening and falling apart by this point, right as Season Four of Supergirl is approaching its finale. Despite a pretty intense confrontation with James, and the continued roundup of aliens to be used as weapons fodder for Lex (more on that in a second), I’m starting to get the sense that Lockwood will possibly waste away into nothing by the time the season is over. It’s a surprisingly smart slice of drama for a show that sometimes reeks way too much of adolescent bickering and white privilege. It would be especially effective if Lockwood ends up somehow playing into Lex’s undoing as well, possibly setting him up for a redemptive arc next season, assuming that Supergirl doesn’t opt to scrap Lockwood’s character entirely after the upcoming season finale.

The climactic mystery and confrontation with Red Daughter is also quite good, as Kara discovers that her Kaznian copy has been living under her nose in National City the whole time. This seems a little head-scratching at first, but the idea of Red Daughter hiding in plain sight isn’t inherently a bad one, especially when we learn that she’s spent quite a bit of time stalking Kara from the shadows, using her disguise. Kara being captured by President Baker at the start of the episode goes nowhere fast though, as does the initial debate between the two Kara’s, which somehow sees Kara effortlessly pushing through Kryptonite poisoning in order to escape. Sure, she takes a bullet that J’onn has to pull out, but Kryptonite barely affecting Kara beyond a bit of discomfort is pretty unbelievable, especially when it doesn’t even affect Red Daughter for the first several minutes either. What is it with the Kryptonite in the Supergirl universe being so incredibly unreliable?!

Fortunately, Red Daughter eventually taking Eliza hostage, which later draws Kara and Alex back to Midvale, sets the stage for a pretty exciting battle between Kara and her clone. The arc of Alex slowly rediscovering her memories of Kara being Supergirl through this battle is also pretty good at first, even if the way that Alex fully regains her memories is pretty lame. Despite J’onn claiming that Alex’s mind has completely walled off her old memories, and there’s no way to salvage them without shredding Alex’s sanity, this simply turns out to be untrue, since Alex suddenly recalls that Kara is Supergirl when she’s fighting Red Daughter, and that’s just it. Seriously? So, either J’onn’s a liar, or, more likely, the show wrote itself into a corner, and couldn’t come up with a logical way for Alex to recall her sister’s superhero identity. I could have also done without the lame display of the grass reviving a fallen Kara after Red Daughter seemingly beats her as well. The writers really seem to have thrown up their hands during this entire sequence, despite the actual Kara/Red Daughter fight being pretty good.

The other major plot of the episode involves Dreamer, Brainy and J’onn all going to Lockwood’s alien compound, to try and free the captured prisoners. This entire sequence seems to suffer from the most contrivances, which is a shame, because it’s otherwise a pretty cool scenario. Brainy and Dreamer stupidly get themselves captured after J’onn temporarily flies off, with Brainy trying to pose as Lockwood, and immediately being foiled by face-shifting scanners. He seriously never considered that the Department of Alien Affairs would have those? Regardless, during the subsequent torture session, Brainy is rebooted into his ‘evil’ Brainiac 5 state, or, more accurately, his un-emotional Brainiac 5 state. This leads to Brainy ruthlessly taking out his captors, and allowing both J’onn and Nia to get captured, and ferried to some unknown location to power Lex’s main weapon against Supergirl; A compact version of the alien patrolling satellite beam that now fits into his Lex-O-Suit. Brainy regressing into his Brainiac 5 state is a decent turn, but the way this happens is pretty dumb, especially when J’onn and Nia inexplicably don’t seem to put together that Brainy is not himself. J’onn may suspect that something is up, but he doesn’t ultimately do anything about it, which doesn’t feel true to his character, at the very least. 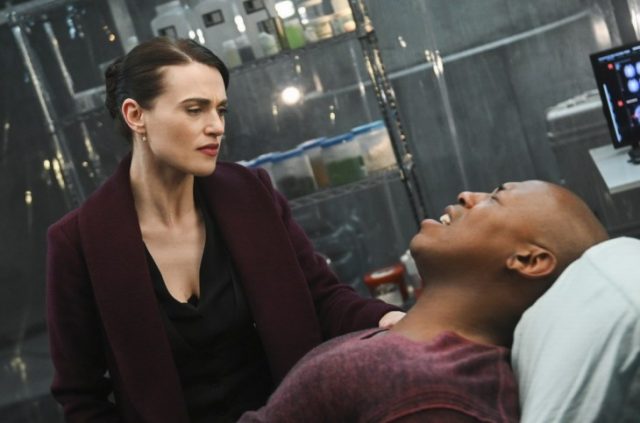 There’s quite a lot that happens in this episode, and the busy storytelling sometimes trips over itself, but, “Red Dawn” does manage to position Supergirl pretty well for its fourth season finale. Lex stopping the Kaznian invasion entirely off-screen is pretty unsatisfying, but there’s some great dramatic stakes set up as he’s seen on a television broadcast holding the fallen Red Daughter, and seemingly being successful in redeeming himself as a hero in the public eye. If there’s one bit of political commentary that Supergirl has done a good job of exploring this season, it’s the idea of media and outrage manipulation, and how this can serve the agenda of people who will say what they have to do in order to singularly empower themselves. This is a great Lex Luthor story device, and all that’s left is to see it through to a strong conclusion in the season finale. Again, the subplots of this episode couldn’t quite keep pace, with the return of Alex’s memories and the transformation of Brainy being very hasty and contrived in the end, but I suppose I can forgive this if it at least leads to more solid story material in Season Four’s subsequent finale.