Arrow’s standout Emiko/Ninth Circle conflict finally approaches its climax and resolution in the seventh season finale, “You Have Saved This City”, an episode that also ends up foreshadowing the coming end of Arrow as a whole later this year. There’s no shortage of excitement as Team Arrow rushes to stop the ultimate plan of Emiko, which sees all of Star City at risk by the deadly Cygnus Virus. Fortunately, the team calls in help, with Laurel and Curtis making a temporary return to assist the others in saving the city, complete with an additional ally that should prove to be quite the surprise!

All of the pieces are thus laid for a satisfying and engaging ending to Arrow’s strong seventh season, though unfortunately, the rushed nature of this season finale does lead to the season tripping at the finish line. There’s still plenty to enjoy in Season Seven’s final offering, especially with all of the thrilling action and high stakes, but it feels like this story foundation should have been spread across two episodes, not one. Not only that, but Arrow seems to have disappointingly few turns left for its arch-villains’ agendas, even now, with Emiko’s grand plan, and the stakes it places upon Oliver, all recycling too many tired tropes that Arrow has done to death so much over the course of its prior seasons. This episode may not be a terrible season finale by any means, but it is a disappointing one, considering how great this season has been, especially over the past several weeks.

In any case, Team Arrow has to flee the SCPD, who naturally blame them for the attack on the precinct, because apparently Star City’s police force remains as stupid as they are expendable. Regardless, after narrowly preventing a Cygnus attack at a local shopping center, Team Arrow finds a surprising ally in Ben Turner, a.k.a Bronze Tiger! Having gained parole from Slabside thanks to the help of Oliver’s crew, Turner decides to stand alongside Team Arrow in saving the city from Cygnus, bolstering the team’s ranks alongside Laurel, Curtis and Roy. After some running around and disabling of other drones, the season’s endgame then unfolds at the Palmer Technologies building, which is fitting, since the building used to be owned by Queen Consolidated. Truthfully, there’s no better place to have Oliver confront Emiko for the last time.

The action really kicks up at the Palmer Technologies building as well! There’s a huge helping of non-stop thrills here, as Team Arrow engages a big wave of Ninth Circle forces, who are all determined to defend the last planned activation spot for Cygnus. At the same time, Oliver continues to try and turn Emiko back to a better, more heroic ideal, resulting in a confrontation between them as well, though frustratingly, this ends up becoming moot. Virgil, alongside another Ninth Circle higher-up named Beatrice, decides to seize leadership of the Ninth Circle away from Emiko, and after Oliver and Emiko have to fight off some more soldiers, Virgil and Beatrice escape, while Emiko is mortally wounded. Oliver then has to watch his sister die in his arms, which should be dramatic, but the moment kind of falls flat in the end. Emiko ends up dying very thanklessly, and the overly efficient way that her entire operation was seized from her is incredibly disappointing. It extensively deflates Emiko as an arch-villain for Season Seven when her entire organization ends up being stolen from her in a few seconds flat, right before she kicks the bucket like a chump! 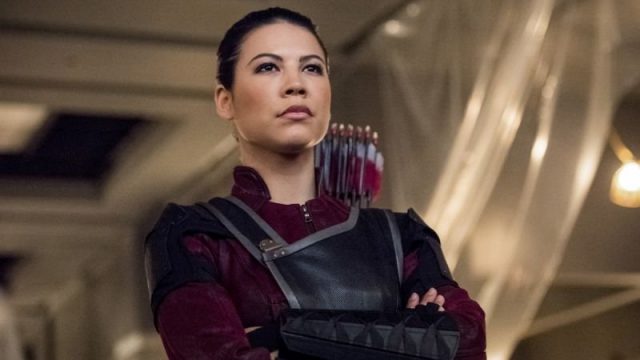 Another tired trope that this season finale frustratingly recycles, albeit one that we knew was coming, is Oliver and Felicity once again leaving Star City, after it’s been saved for the latest time. The Ninth Circle is still an active enemy, and after Emiko’s final threat that the Ninth Circle will never stop hunting Oliver’s family (why they’re still doing this after Emiko loses leadership of them, I don’t know), Oliver and Felicity decide to go to the remote cabin that was seen in, “Star City 2040” several weeks back, where Felicity has Mia, and Oliver enjoys some well-earned R&R with his wife and newborn daughter. Obviously though, this doesn’t last, since The Monitor shows up at the cabin soon afterward, reminding Oliver of the bargain he struck to save The Flash and Supergirl during last year’s Elseworlds crossover event. This is another of the season finale’s better moments, admittedly, since The Monitor spells out in no uncertain terms that Oliver will die during this Fall’s Crisis on Infinite Earths crossover event, and he has no choice but to leave Felicity. This moment marks a pretty quick and dirty exit for Emily Bett Rickards, who is departing Arrow after this season, but the highly emotional exit foreshadowing for Oliver is nonetheless done very well, beautifully setting the stage for the Arrowverse’s next major crossover event, while also exceptionally teasing Arrow’s upcoming final season.

If anything suffers from the rushed pacing of this season finale however, it’s the flash-forwards, which suddenly have to cover a lot of ground to wrap up Star City’s future 2040’s arc. Despite being surrounded by Zeta’s, the heroes get out of that corner pretty quickly, since Connor is hiding among the super-soldiers, and apparently the Archer-powered thugs aren’t even that tough to take down to begin with, even for Alena! That’s pretty lame, honestly, and makes the entire Zeta line of soldiers look incompetent and terrible. The fact that Felicity installed a convenient backdoor in Archer’s software, which makes it fail to recognize Mia’s DNA, also feels contrived and very illogical. Still, this allows Mia to efficiently set off some explosives that blow up the entire wall surrounding The Glades, in a forced and tedious false sacrifice that’s quickly rendered moot by more dodgy arrow grappling effects, which this episode is weirdly full of. Yeah, the flash-forwards seem to have thrown up their hands with this conclusion, but whatever. They weren’t a big draw for this season in the end anyway. At least the flash-forwards do end with another nicely bittersweet moment for the surviving Queen family members though, as they visit Oliver’s gravestone, before Felicity goes with The Monitor to reunite with her husband, via a mysterious portal to parts unknown.

This final tease in the flash-forwards surrounding Felicity and The Monitor may suggest that Oliver’s ‘death’ is not a traditional nor straightforward one, but I guess we’ll have to wait and see when the Crisis on Infinite Earths crossover event airs this Fall. It’s very frustrating to see Arrow fumble the ball so much in the eleventh hour, but despite a lot of rushed, problematic storytelling, at least, “You Have Saved This City” is pretty exciting to watch, especially for avid DC fans who are looking forward to a grand climax for Arrow as a whole this Fall. Emiko going down like a chump was definitely a bummer though, plus the flash-forwards’ conclusion definitely left a lot to be desired, only offering more tired superhero drama tropes as a payoff to the grand struggle against Galaxy One and Kevin Dale. Despite the Ninth Circle still living on to presumably keep menacing Team Arrow during Arrow’s final season later this year, it’s the Crisis on Infinite Earths foreshadowing that ultimately ended up having the most appeal in this season finale, at least outside of its pretty great action scenes. I suppose this at least means that Arrow doesn’t feel like it’s running on fumes as it heads into its final batch of episodes towards the end of this year though. Thus, here’s hoping that Oliver’s renewed batch of inspired drama can carry on just a little bit longer, so he can close out his legacy as the Green Arrow on a well-deserved high note!

Arrow 7.22: "You Have Saved This City" Review
Arrow's superb seventh season frustratingly trips at the finish line with the exciting, but rushed and contrived, "You Have Saved This City", which does a better job of foreshadowing future events than effectively wrapping up the battle against Emiko.
THE GOOD STUFF
THE NOT-SO-GOOD STUFF
2019-07-08
70%Overall Score
Reader Rating: (0 Votes)
0%