The Flash set out with so many interesting ideas for Season Five, and yet so few of them have worked. Mercifully though, we can finally come to the end of the increasingly tedious Cicada saga with the fifth season finale, “Legacy”, which also doubles as an efficient way to re-introduce one of the show’s greatest villains back to its ensemble. Better still is that, while it’s definitely too little, too late at this point, “Legacy” also manages to be a pretty good season finale for The Flash, one that at least allows the Cicada conflict to lead to a satisfying payoff, and also an emotional one for Team Flash.

As it turns out, Ralph just barely stretched himself in front of the Mirror Gun shot leveled at Cicada’s dagger from the end of the previous episode as well, turning him into an inverted, polygonal mess, while also allowing Cicada II to escape for the umpteenth time. Ugh, who even cares anymore? Regardless, Team Flash can’t communicate with Ralph while his molecules are scrambled, and are thus left to figure out why he would have jumped in front of the Mirror Gun blast and prevented the dagger from being destroyed. Fortunately, Sherloque, somehow, pieces together exactly what Ralph had figured out shortly beforehand; That Cicada’s dagger is the only thing keeping Eobard Thawne de-powered in the future, and if Team Flash destroys it in the present, the Reverse-Flash will return to once again wreak havoc on the timeline. Honestly, Caitlin might as well have just immediately been able to cure Ralph, because there are no lasting consequences to hitting him with the Mirror Gun anyway, plus that makes more sense than Sherloque somehow pulling the perfect deduction out of his rear end at the drop of a hat. 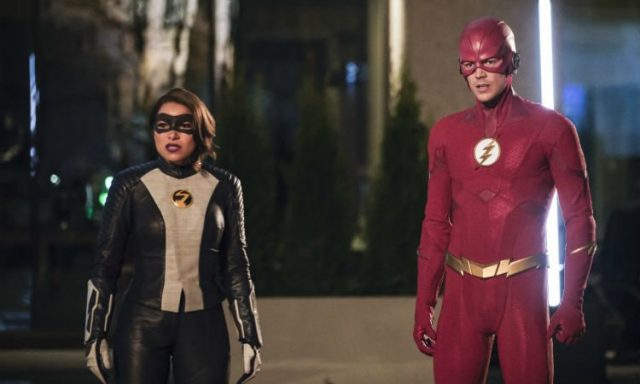 Regardless, this twist with Cicada’s dagger results in a legitimately superb character debate, even if it does have to be squished entirely into this season finale. In order to stop Team Flash’s current greatest threat, a person that has the means to murder thousands of metahumans across the country, they must accept the return of one of the most evil and powerful speedsters of all time. Barry in particular being willing to potentially let that many people die in order to ensure that Thawne is executed makes for a surprisingly dark and challenging moment for this show’s lead character! Fortunately though, Nora comes up with an alternate solution; Use Cecile’s empathy powers to locate the younger Grace, and re-enter her mind so that she can wake up and take the metahuman cure, thus destroying Cicada II, without destroying the dagger.

This is actually a pretty smart plan, even if, once again, the trip into Grace’s mind feels overly convenient and rushed. The two sides of Orlin Dwyer, who I guess wasn’t actually alive, but was somehow a figment of Cicada II’s imagination that the show manifested physically (again, who even cares anymore?), pulling her in opposite moral directions is interesting, though if Grace waking up was as easy as her being encouraged, then why couldn’t Nora just rouse her from her coma before? Yet again, the Arrowverse solves a massive problem with a pep talk, so take a shot. I’m making that a thing now, you heard it here! In any case, Grace agreeing to take the metahuman cure doesn’t end up mattering, since the shard in her head is the true source of her powers. So, this excuse to wake up Grace is both cheap and ultimately pointless, since Team Flash is forced to use the Mirror Gun on the dagger anyway. This does destroy Cicada II, but obviously, it also allows Thawne to escape his execution in the future. 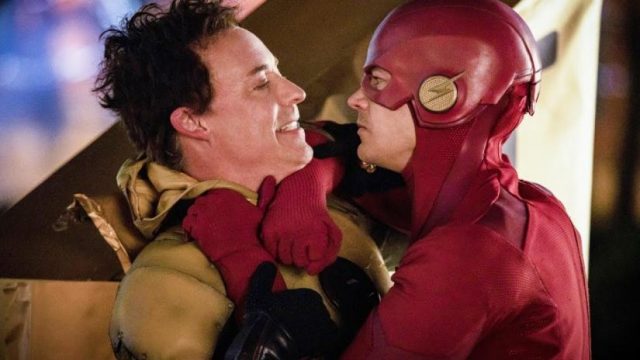 Amidst all of this chaos, a big subplot also unfolds with Cisco, as he struggles with whether or not to confess his identity as Vibe to Kamilla. Inevitably, he does so, in turn revealing that Kamilla is the part of his life that’s normal, particularly since he’s the one that developed the metahuman cure that is now both the cause of and solution to Central City’s current predicament. Kamilla accepts Cisco for who he is, encouraging him to be the person that he wants to be, but after a taunt by Thawne later in the episode, Cisco decides that he’s done being Vibe. This is a huge decision on the part of the writers, but perhaps it will help tighten the storytelling next season, since Cisco’s vibing has so often been used as an easy Deux Ex Machina whenever The Flash writes itself into a corner. The decision is final as well, since Caitlin administers the metahuman cure on Cisco, permanently removing his powers. Honestly, I think this is a good call, since it will allow Cisco’s character to evolve, while also forcing Team Flash to use alternate means of staying ahead of their future enemies. I just hope that the decision isn’t eventually reversed later in the series’ run.

As for how Team Flash is inevitably forced to deal with Thawne, Barry and Nora eventually confront him and chase him through the future-era Central City, before Thawne is eventually subdued, at least temporarily. At this point however, Nora begins to become erased by the timeline, with Thawne revealing that, in erasing Cicada’s dagger, Team Flash also eliminated Nora’s story as XS, effectively removing her from history in her current incarnation. The only way to potentially save Nora is to put her in the Negative Speed Force, which Barry initially tries to do, only to have Nora refuse to go along with it. Barry and Iris thus have no choice but to hold their future daughter as she vanishes into tachyons, in what’s honestly a surprisingly emotional, tear-jerking moment, considering that Nora’s character has often been so uneven in terms of appeal. Even the subsequent message that Nora left in the Time Vault is realized perfectly, with this season finale ending on no particular tease for Season Six (at least, outside of Thawne getting away again), and Barry and Iris simply holding each other, as they listen to their daughter’s final message to them. This is a much more low-key season ending than The Flash is used to, but it does feel fitting, and it does pull at the heartstrings very nicely. 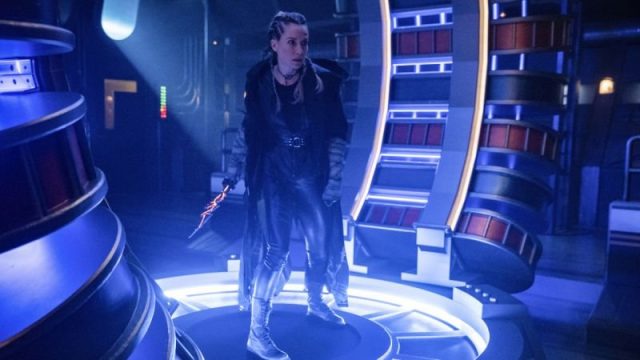 Barry and Team Flash still have plenty of obstacles ahead of them however, particularly with one final epilogue scene in the empty Time Vault, where Gideon reveals that the future newspaper foreshadowing Barry’s disappearance now lists 2019 as its publication date, rather than 2024! It seems that the paper was indeed foreshadowing this Fall’s Crisis on Infinite Earths crossover event, and now that we know that’s happening this year, it would appear that Barry’s fate has been irrevocably altered by both Thawne’s and Nora’s meddling with the timeline! Perhaps this means that Barry no longer disappears, at least not permanently, especially since it instead seems to be the Green Arrow that’s marked for death in the Arrowverse at this point, but I guess that’s a problem for the crossover later this year.

It’s frustrating that Season Five of The Flash so often ends up feeling like a misfire, but at least it had the luxury of ending on a pretty strong, emotionally resonant note. “Legacy” beautifully concludes Nora’s story arc with equal doses of optimism and tragedy, while also exploiting the otherwise failed Cicada arc to provide a surprisingly smart means of unleashing Thawne on the Arrowverse yet again. The tease of Barry’s disappearance moving up to this year also provides something great to look forward to in Season Six, even if I’m sure that the show will write around it to keep Barry in the land of the living. Something that the show hopefully doesn’t reverse however is Cisco’s pivotal decision to take the metahuman cure and permanently remove his powers, signaling the death of Vibe on Team Flash, and thankfully eliminating an all-too-convenient story device that the series had started to abuse. Even with no real hint as to where Season Six may be going at this point, at least it’s comforting to know that The Flash can hopefully move on to a better season/villain arc from here, now that its biggest current storytelling blemishes have finally been wiped clean.

The Flash 5.22: "Legacy" Review
The Flash concludes a weak fifth season with a surprisingly strong season finale in, "Legacy", which finds a satisfying, emotionally powerful way to conclude the story arcs of both Nora and Cicada.
THE GOOD STUFF
THE NOT-SO-GOOD STUFF
2019-07-08
84%Overall Score
Reader Rating: (0 Votes)
0%