Riley Sager and summertime make an interesting combination. I say that because, during each of the last three sweltering seasons, the author has released a full length novel. One for each year.

First up was 2017’s Final Girls, an impressive homage to the slasher film genre that I couldn’t put down once I’d picked it up. It was fresh, had a very good pace to it, and presented a mystery that kept making me want to read on to find out what would happen next. As such, it’s no surprise that the book has received a lot of great reviews, won awards and is currently being made into a movie.

Then, in July of last year, Sager followed up his debut with The Last Time I Lied. I can’t say too much about that one, though, because I’ve yet to read it and plan to do so soon.

Now, in the sweltering summer of 2019, we’ve received Lock Every Door, the third hotly anticipated release from one of horror’s busiest budding authors. A book that, once I’d heard it was coming, instantly became one of my most anticipated upcoming releases.

Behind Lock Every Door‘s attention grabbing pick cover, with its large text and ominous visuals, lays the fictional story of Jules Larsen.

After losing her job and her cheating boyfriend on the very same day, Jules seeks refuge at her best friend’s apartment, but knows that it won’t be permanent. It’s during her immediate job searches that she discovers a promising listing on Craigslist requesting apartment sitters. The ad is vague, but it offers easy money, not to mention a good amount of it. In fact, as Jules will later learn, the job pays twelve thousand dollars for three months of apartment sitting. Needless to say, this is a sum that the down-on-her-luck protagonist is not able to say no to, even when some red flags arise. 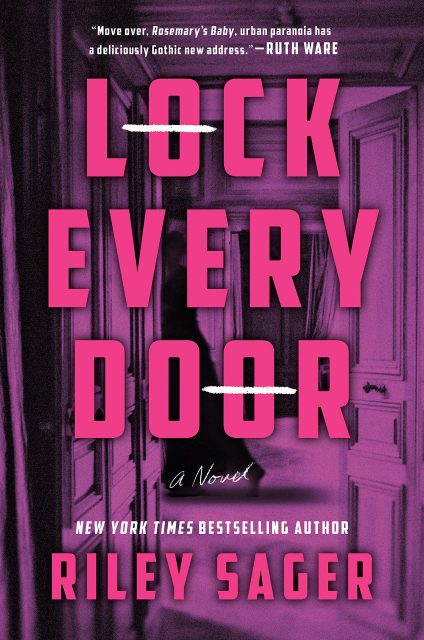 What she doesn’t know, though, is that this potential new gig is at the swanky Bartholomew. A century old apartment building, the New York City landmark is famous for more than just its gargoyles. For starters, it’s well known that only the richest of the rich live in its forty-four apartments. Talk of strange happenings also dogs the old place.

Jules is very familiar with this particular building, and not because she grew up nearby. In fact, Ms. Jules Larsen hails from another state, where she and her older sister were obsessed with a book called Heart of a Dreamer, which told the story of a 20 year-old orphan who inherited an apartment in the building and then went on to live a life of luxury. This was before Jane disappeared, and was perhaps even murdered, after getting into a black car after a day at work.

Although some of the interviewer’s questions seem odd, Jules agrees to look after a gorgeous apartment on the top floor. She does so even after hearing about the strange rules that must be followed if she wants to get her $12,000. Rules including not being able to have company over, never being able to spend a night outside of the apartment, having to check the mailbox every single day and having to avoid talking to or bothering the other residents. They are not to be disturbed, unless they speak to her first.

The idea of such a large sum of easy money makes our protagonist overlook these red flags, despite warnings from her best friend, who urges her not to take the job. So, too, does the allure of a free place to stay for three months, not to mention one with such a beautiful view of Central Park.

After she moves in, it starts to seem like something about the Bartholomew is off. Fellow apartment sitters have moved out without warning, seemingly in the middle of the night. Jules also starts to hear weird sounds, notices strange things and feels like she’s being watched.

With a striking, interest-piquing cover and such an interesting premise, Lock Every Door had tons of promise and had me very excited. I looked forward to being able to get my hands on it, because I expected it to be another memorable read from Riley Sager. Final Girls was so good that I thought there was no way he’d disappoint.

Unfortunately, that didn’t end up being the case. Despite being well written, this particular novel didn’t excite, interest or intrigue me as much as its predecessor did, nor did I find it as entertaining or as difficult to put down.

Things started well, but then slowed down quite a bit, which normally doesn’t bother me as there’s usually a good reason for it. I’m not the type of person who needs constant action in movies, TV shows, books or video games. However, the slow build up that occurred throughout most of this book didn’t pay off as well as I was hoping and thinking it was going to. To be honest, I guessed the rather predictable twist well before I reached the end.

I didn’t hate my time with Lock Every Door, though, and want to make that clear. I thought that Jules was a deep and pretty well written character, even if she made some dumb decisions. She’s another strong heroine from an author who writes them well. On top of that, I liked the interplay between she and some of the guests, as well as some of the mystery that was built up throughout the book. It just didn’t all pay off as well, or with as much horror and as much of a wow factor, as I’d hoped. It was too easy to guess what was going on, and there wasn’t enough of a scare factor to everything.

In the end, Lock Every Door turned out to just be decent and okay. Disappointing, but not bad. Just kind of ho-hum, I guess you’d say. I wish I would’ve liked it more.

**This review is based on a copy of the book that was provided to us by its publisher.**