NOTE: Full spoilers for this episode of, “Game of Thrones”, including a major character death, are present in this review

Game of Thrones has reached its final episode, but after so much disturbed momentum from throughout the series’ final season, the storytelling has a lot to prove here. Unfortunately, as a series finale especially, “The Iron Throne” still feels shakier than it should. The domino effect from the former underdeveloped story arcs continues to wreak havoc on the plotting, especially after Daenerys has so openly embraced the role of being King’s Landing’s new tyrant queen, leaving the city she aimed to save in ashes and desolation. Oh, and if anyone still cares, we do finally get confirmation that Cersei and Jaime are very much dead too. Tyrion finds their corpses in the collapsed tunnels, and no real narrative fallout is had from this, so whatever.

All that’s left then is to see whether Daenerys’ reign is truly long, and what the implications of it mean for Westeros. Since Daenerys is now the final threat to the Seven Kingdoms, there’s only one choice left to make, one that fittingly falls on the shoulders of Jon Snow; Embrace Daenerys’ rule, or end it. After Tyrion rejects being Daenerys’ Hand, in the wake of what Daenerys has done to King’s Landing, he is arrested, and presents Jon with this ultimatum, leading to an emotional confrontation between Jon and Daenerys within the destroyed throne room. This is going to be another contentious moment for many fans, since Daenerys’ turn as a villain still feels too rushed and undercooked to land with the proper dramatic impact, and the same is true of Jon making his fateful choice, stabbing Daenerys to death during an embrace, and leaving her body for Drogon to find soon afterward.

The unceremonious end of Daenerys isn’t an issue. As with Daenerys descending into a fear-based reign of tyranny and violence, it was really the only logical way for her character’s arc to end, considering the present circumstances that she’s created in Westeros. The problem is once again that it all just happened too quickly. Daenerys’ actions and heel-turn, Jon’s decision to murder his queen and lover, and the ashes of King’s Landing being examined by the survivors, it’s all happening too fast. The show is now barreling towards its conclusion with reckless abandon, and that gives it the unfortunate feeling that it just doesn’t care anymore. This is the absolute last feeling that a series finale of all things should be conveying to its audience! Sure, the triumphant and satisfying moment of an enraged Drogon melting the Iron Throne with his fiery breath helps to make up for this, finally freeing Westeros of the symbol behind its tyrannical rulers, but it still feels like the drama just isn’t landing as much as it should be.

After Drogon flies off to parts unknown with Daenerys’ body, a time jump then takes place, with all of the surviving lords and ladies of Westeros being gathered to judge Tyrion, several weeks after Daenerys is killed by Jon. Jon has also been imprisoned in the time since, but only Tyrion is receiving sentencing, where he takes the opportunity to appeal to Westeros’ most powerful people that a new ruler must now be chosen, not appointed by blood. There’s a bit of humourous debate here, providing some welcome levity after all of the death and destruction behind Daenerys’ brief reign, but eventually, it’s decided that Bran should be the new ruler of the Seven Kingdoms. Or, I guess I should say, Six Kingdoms, since Sansa decides to make the North an independent nation again, instead embracing a new mantle as queen of Winterfell. Honestly, is anyone surprised? 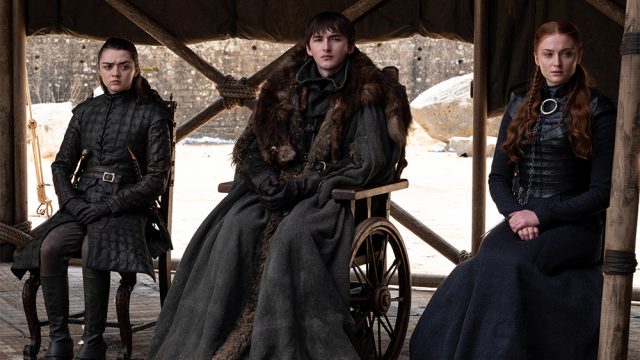 The altered paradigm behind the ruler of Westeros is well-chosen, and feels like a fitting conclusion to the grand struggle for the Iron Throne, where no one effectively ‘wins’ the Game of Thrones. Bran is appointed King of the Six Kingdoms, because he’s the Three-Eyed Raven, and is the most neutral party, something that’s bound to be incessantly debated by fans, though I personally didn’t have much of an issue with it, since it is the most logical switch from Westeros’ legion of petty, power-hungry former rulers. Tyrion’s appeal that the best king should have the best story also works to mixed effect, but Tyrion being made Bran’s hand as a method of penance for his former mistakes feels fitting, as does characters like Bronn, Brienne, Davos and Sam all taking up key leadership roles in King’s Landing. It does seem like the beginning of a new and better era for Westeros, even for the Unsullied, who have now decided to start a new nation of their own making in Naath, presumably under Grey Worm’s leadership. What happened with the Dothraki, you ask? I have no idea. The show seems to have forgotten about them. I guess the Dothraki just returned to their home nation, but either way, it’s a pretty huge oversight to not address what happened with them, considering how huge a part they played in Daenerys’ forces!

The surviving Stark siblings all ending up with important roles in the new Westeros, or at the very least, roles that suit them, also feels like a satisfying conclusion. Sansa being queen of a newly-independent Winterfell does make some degree of sense, as does Arya becoming an explorer and attempting to determine what’s further West of Westeros. Jon gets a bit of a raw deal meanwhile, since he’s sent back to the Night’s Watch, but later reunites with Ghost and Tormund, deciding to join the Free Folk instead of have anything to do with the Six Kingdoms. Jon’s melancholy, but vaguely optimistic new life, Arya’s continued determination for adventure, Bran using his training as the Three-Eyed Raven to begin a new era for the Six Kingdoms, and Sansa rebuilding the North through independent leadership, are all pretty good and satisfying conclusions for the core Stark family’s remaining members. At least the Stark family’s story resolutions aren’t ultimately harmed by the otherwise rushed storytelling of Game of Thrones’ final season, even if not every fan is bound to agree on the final fates of the Stark siblings, depending on their subjective hopes for their characters, and that’s fine.

“The Iron Throne” doesn’t totally manage to right the ship with Game of Thrones’ rushed, uneven final season, but it also doesn’t do a terrible job of wrapping up the show by any stretch. As a series finale, it’s still a little bit weak, especially considering how quickly Daenerys is dispatched and seemingly forgotten in the new era of Westeros, but at least the Stark children found interesting new lives for themselves, and at least King’s Landing seems like it’s going to ultimately become a more prosperous nation in the wake of Daenerys’ violence. It’s inevitable that many fans wouldn’t have been perfectly satisfied with the finale even if Game of Thrones’ final season had consistently fired on all cylinders, but considering that the final batch of Game of Thrones episodes were really beginning to flounder from a narrative standpoint, “The Iron Throne” does what it can to make the best of a bad situation. In that respect, it’s not great, but it certainly could have been a lot worse too.

Game of Thrones Series Finale: "The Iron Throne" Review
Game of Thrones' final episode doesn't manage to salvage the final season's flagging storytelling, but it at least manages to provide a decent resolution for most of the characters.
THE GOOD STUFF
THE NOT-SO-GOOD STUFF
2019-07-16
75%Overall Score
Reader Rating: (0 Votes)
0%