Legends of Tomorrow’s extra eccentric Season Four storytelling nicely sets the stage for what’s sure to be a memorable season finale! The pressure is really on for the series as well, what with The CW recently announcing that Legends of Tomorrow’s upcoming fifth season won’t air with the network’s other DC dramas in Fall, and will instead be held for midseason in 2020. Thus, the show really had to cap off Season Four on an especially outstanding note to tide over fans. Fortunately though, “Hey, World!” delivers, standing tall as a fourth season finale for Legends of Tomorrow that’s just as hilarious as it is exciting.

After Neron and Tabitha forcibly transform Charlie into Tagumo during a public hearing, the world’s citizens become panicked at the widespread revelation of the existence of magical creatures. The resulting fear and unrest creates a very strong negative energy reaction for both Neron and Tabitha to build their power off of, immediately creating quite a powerful disadvantage for the Legends to deal with. With the team seemingly out of options, Zari and Nate thus decide to solve the immediate problem of Zari accidentally leaving the dragon egg in the care of her younger self, only to find that the kids on the playground who once bullied her are delighted and amazed at the little Zari’s new baby dragon! This gives the Legends the idea to counter Neron’s and Tabitha’s plan by reversing negative opinion on magical creatures, and there’s one very efficient way to do that; Heyworld! 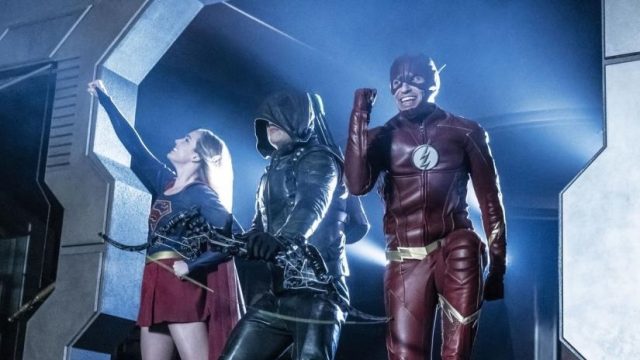 The way that Heyworld ends up coming together is pretty inspired and clever too. All of the obvious problems are indicated, namely that all of the magical creatures will be in one place for their attackers, plus a theme park would take years to build. Thankfully, Mick happened to salvage the magical journal from the Time Bureau, which he hilariously presents to Ava in a very casual manner, allowing Nate to begin immediately drawing Heyworld into existence! Since the magical creatures are all on the Waverider, all that’s needed is to lead them into the attractions, and start arranging acts for them, with the adoration of the public then hopefully doing the rest, leaving Neron and Tabitha powerless to control humanity’s fear, or at least the way they’re currently doing it.

It initially seems like an open-and-shut job, and this does lead to a more low-key, light-hearted season finale than you would initially expect. Even Nora’s journey to recover Ray and Constantine from Hell goes over in a very light-hearted, comical manner too. Gary’s wish does allow Nora to immediately track down Constantine, where she instantly wishes away Calibraxis, and gets Constantine to disguise himself as Neron in order to tempt Astra, even if Astra quickly sees through this. The ensuing soul heist does lead to a pretty amazing payoff though, wherein it’s discovered that none other than Vandal Savage, the Legends’ original archenemy, was sent to torture Ray in Hell, only to end up becoming his new best friend! This was a very clever and very funny opportunity to reward longtime Legends of Tomorrow fans for their continued viewership, on top of giving Casper Crump a very amusing and memorable chance to add some unexpected new dimensions to Vandal Savage’s character, namely that he apparently loves Jenga, and speaks in 80’s lingo! I think this is the most interesting that Vandal Savage has ever been in the Arrowverse, frankly, and I’m almost sad that Ray had to be whisked out of Hell so quickly, since it means that we probably won’t be seeing Vandal Savage again anytime soon, if ever.

It’s still not quite that easy though, since Ray’s body is still being used by Neron, leaving Ray to travel on Earth as a soul coin. Nonetheless, Heyworld has come together, and the public has begun to embrace it, with the Legends deciding to use the likenesses of Green Arrow, The Flash and Supergirl to try and lure people into the theme park. This is another very funny and surprisingly clever story turn, one that jokingly pokes fun at Legends of Tomorrow skipping last year’s Elseworlds crossover event (though The Monitor nonetheless makes a quick cameo in Heyworld, to foreshadow the Legends being a part of this year’s Crisis on Infinite Earths crossover, despite Legends of Tomorrow now going off the air until 2020), while also effectively playing with the public draw of the heroes in the Arrowverse, including Supergirl, despite her living on a whole other Earth.

The climax for this season finale is nicely laid out from here, as the Legends try and fail to stage a show advocating for tolerance of magical creatures. The show is interrupted by Tabitha and Neron however, with Tabitha having turned the baby dragon into a fully grown, very aggressive dragon! The scared public flees around the park as the Legends try to fight off Tabitha and the dragon, and they almost fail to do so, until the younger Zari suddenly appears to get the dragon to dance. This ends with Tabitha being eaten by the dragon, which cancels the magic on it, and returns it to its baby form. From there, Neron angrily appears to snap the neck of Constantine, only to learn that Nate and Constantine swapped appearances with some of Constantine’s magic, nicely building off of Constantine trying the same trick on Astra earlier in the episode. With Neron having killed Nate, his deal with Ray is rendered null and void, and Neron is separated from Ray’s body, allowing Constantine to finally destroy Neron for good, even if it’s at the cost of Nate’s life…

… But it isn’t. While this episode may overall be an excellent season finale for Legends of Tomorrow, it’s also true that, “Hey, World!” has a bit of a rushed, shaky conclusion, as the series hastily moves to set up Season Five. Nate’s death is quickly reversed with Tabitha’s wand and some singing from the public, though the cost of Zari running out of the Waverider to help results in history being changed, now that the dystopian future she was a part of has been averted, resulting in Zari being replaced by her formerly dead brother, Behrad, who occupies Zari’s role as a Legend in this new timeline. At the same time, Astra also swipes the soul coins of many of history’s most brutal, evil figures, effectively unleashing them on Earth again, and creating a new obstacle for the Legends to face when Season Five of Legends of Tomorrow debuts next year. That’s an exciting prospect for sure, and as with the previous episode, it’s awesome to see the Arrowverse finally exploring a lingering, unresolved plot thread from NBC’s prematurely-cancelled Constantine TV series, the canon of which has since been retroactively folded into the Arrowverse.

Aside from the rushed conclusion, which annoyingly glosses over Zari’s time with the Legends being erased, and in turn makes the budding relationship between Nate and Zari completely pointless in the end, “Hey, World!” nonetheless rounds off the fourth season of Legends of Tomorrow with a truly excellent season finale! Everything surrounding the realization of the late Hank Heywood’s dream, and how it’s ultimately brought to life, while in turn providing a creative and amusing way to defeat Neron and Tabitha once and for all, fired on all cylinders in terms of wit and humour. The show also does a great job of once again immediately setting the stage for its next big threat too, as the newly-empowered Astra begins unleashing the souls of history’s worst evildoers on the planet once more. It really sucks that we have to wait until 2020 to see Legends of Tomorrow return for its fifth season, considering that this show remains one of The CW’s best shows overall, let alone one of its best DC shows, but hopefully the brief visit to Heyworld by The Monitor can at least foreshadow a Legends appearance worth waiting for during the Crisis on Infinite Earths crossover event later this year.