NOTE: Spoilers from throughout the seventh season of, “Arrow” are present in this review

Arrow’s post-flashback era got off to a pretty shaky start in Season Six, which initially marked a period of disappointing villains and tedious, illogical storytelling. Even by the standards of a DC drama on The CW, Arrow appeared to be harmed by having to shed its emphasis on the troubled past of protagonist, Oliver Queen, leading one to wonder if the show had any more useful stories to tell, despite decades’ worth of history from DC’s Green Arrow comic books to potentially adapt. As much as The CW’s overall shared ‘Arrowverse’ has continued to thrive in ratings and relative popularity, it was tough to see this televised DC Universe’s original series once again start floundering so blatantly.

Fortunately however, there was a light at the end of the tunnel, with Season Six eventually throwing out lacklustre arch-villain, Cayden James (who doesn’t even exist in DC Comics lore), in favour of a superior threat in hyper-influential drug lord, Ricardo Diaz, a.k.a. Dragon. Season Six also previously ended with a pretty massive cliffhanger, after Oliver agrees to turn himself in to the FBI, in exchange for wiping clean the rest of Team Arrow’s criminal record as vigilantes. Season Seven thus begins with Oliver in prison at Slabside Penitentiary, Team Arrow disbanded, and Star City’s crime rate being higher than ever, creating quite the harrowing set of stakes for Arrow’s heroes, particularly now that they’ve had to abandon their vigilante identities. This promising foundation ended up paying a ton of storytelling dividends too, since this inspired new direction for the series, alongside its change in showrunners for Season Seven, led to one of the most creatively invigorated and exciting seasons of Arrow to come along since the show’s early years! 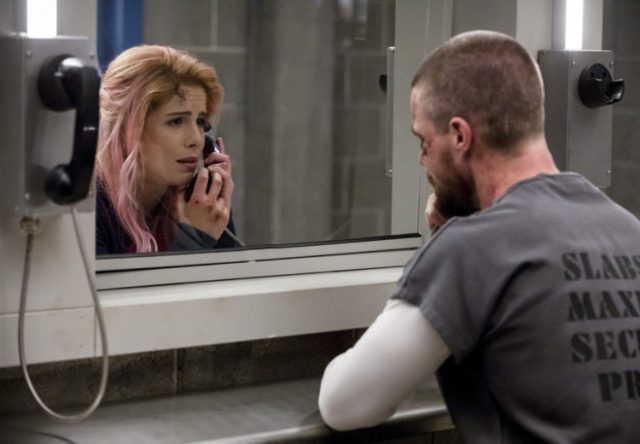 Even if the Slabside arc didn’t ultimately span all season, Oliver having to be locked up alongside several of his former enemies, with his identity as Green Arrow now known to the entire world, allowed this season to start strong, with a highly intense and dramatic series of conflicts that left Oliver both struggling to survive, while being helpless to do anything for Star City. On the outside, Diaz remained a very active threat to boot, now enlisting a trio of deadly criminals-for-hire called the Longbow Hunters, more recent Green Arrow foes from DC Comics lore, who end up giving Diaz more muscle than ever, even with much of his municipal influence now cleaned out. Even this turned out to give way to a surprising curveball however, with Diaz and the Longbow Hunters ultimately being pawns for an even larger antagonistic force from Green Arrow’s DC Comics rogues gallery, that being the Ninth Circle, who ultimately allowed the Longbow Hunters to remain at large by season’s end, while eventually murdering Diaz after Oliver finally gets him locked up in Slabside for good.

Taking out another of the show’s best arch-villains was a big risk for Arrow’s seventh season, but one that ended up paying off, due largely to the inspired mystery behind an impostor Green Arrow that ends up showing up in Star City, and seemingly doing Team Arrow’s jobs for them. This fake Green Arrow turns out to be Oliver’s estranged half-sister, Emiko Adachi (a slightly altered version of Emiko Queen from DC Comics lore), who happens to be connected to a separate foe called Dante, whom Diggle and Lyla are desperate to bring down at A.R.G.U.S. The season wonderfully brought all of its villain arcs to a thrilling climax as well, with Dante being part of the Ninth Circle, now re-envisioned for the Arrowverse as a criminal organization inspired by the personalities of epic poem, The Divine Comedy, and also being both the mentor and underling of Emiko, who turned out to be the Ninth Circle’s leader! This made for one of the more successful ‘villain swaps’ that seemed to be quite popular among The CW’s Arrowverse shows throughout this past season, nicely giving Oliver a creative new challenge after he inevitably gets out of Slabside just under halfway through the season, namely trying to right a different kind of wrong by his cheating father, who sired Emiko many years ago after an extramarital affair, and ended up leaving her and her mother destitute and alone. 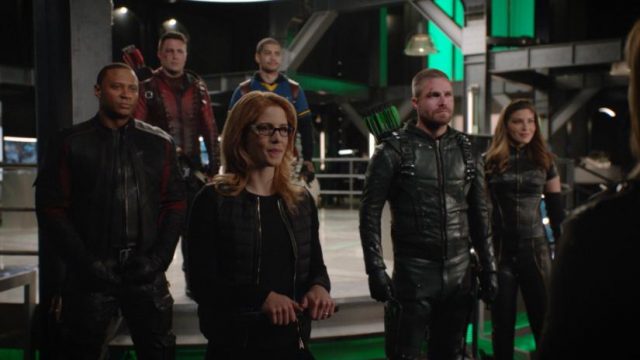 The battle against the Ninth Circle and Diaz also presented a lot of compelling character shifts, which were paced very well throughout the season. Chief among these was Laurel’s redemptive journey as a true hero and civil servant, even after she makes a brief return to her Black Siren identity upon Emiko ruining her career as D.A. The show also saw Dinah losing her metahuman Canary Cry powers after a brief scrap with Stanley Dover, one of Oliver’s escaped cellmates from Slabside, had former enemy, Ben Turner/Bronze Tiger end up defecting to the good guys in time for the season finale (setting up another interesting switch for the Diggle family later), and most notably, had Curtis leaving Star City to take up a government job in Washington. This bold desire to experiment with the show’s leads, while coming up with novel, yet faithful character storylines for all of them, served as the key catalyst behind Arrow’s outstanding creative boost in Season Seven, which helped make Arrow feel as fresh as it was when the series first started all the way back in 2012!

The only more uneven part of this experimental new direction for the show came by way of the flash-forward sequences. Replacing the flashbacks from Arrow’s first five seasons, Season Seven’s flash-forwards demonstrated a dystopian Star City of the early 2040’s, which was now oppressed by a hyper-developed and powerful new rendition of The Glades, the city’s formerly poor, crime-riddled borough. These flash-forwards incorporated older, more grizzled versions of several of the show’s leads, including a return by former Team Arrow veteran, Roy Harper (who also shows up in the present-day events of Arrow later in the season), who ends up becoming a guide for Oliver’s then-adult son, William. After reuniting with Dinah, who ends up heading an anti-Glades resistance group called the Canaries, William then goes on to discover that he has a sister, Mia Smoak, the biological daughter of both Oliver Queen and his wife, Felicity Smoak. Tough, resourceful and very, very smart, Mia proves to be the perfect ally to William, with both of them, alongside a new variant of Connor Hawke, now being the son of Ben Turner that is eventually adopted into the Diggle family (thus retconning the 2040’s-era Star City formerly glimpsed during the first season of Legends of Tomorrow), squaring off against evil corporation, Galaxy One, a front for terrorist faction, Eden Corps, who previously made an appearance on The Flash. 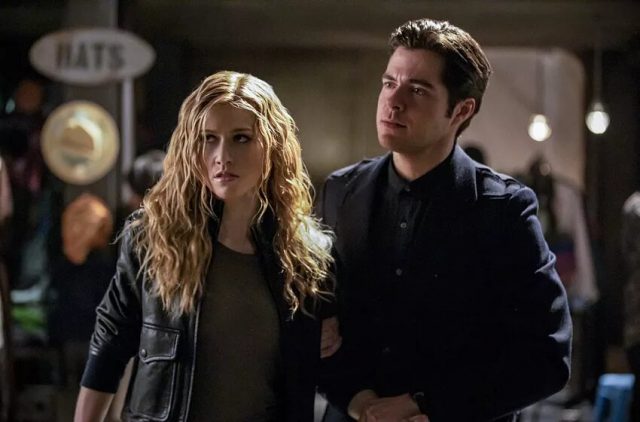 These flash-forward storylines sometimes worked to mixed effect, particularly since they often ended up intruding on far more interesting and engaging storylines that unfolded during Arrow’s present-day events. Ultimately, Galaxy One and their leader, Kevin Dale didn’t end up being that interesting or effective of villains, but the flash-forwards did at least end on a tantalizing note in the season finale, if nothing else. Now that we know that Arrow’s upcoming eighth season will be its last, there’s a great sense of lingering doom for Oliver and for Team Arrow, after Oliver makes a fateful deal with all-seeing multiverse authority, The Monitor to save the lives of The Flash and Supergirl during this past season’s Elseworlds crossover event. Oliver is thus marked for death, or a fate worse than death, leading to the question of where Star City stands without its flagship hero, and where that leaves both Felicity and her newborn daughter. The season ending with Oliver starting his mysterious mission with The Monitor, and Felicity going to reunite with her husband in the future after the battle against Galaxy One is over, starts exceptionally setting up the overall conclusion of Arrow, which is preparing to end its run this Fall. It’s just too bad that we have to slog through a lot of uninteresting flash-forward storylines to get to these promising teases for a post-Green Arrow Arrowverse.

Despite that small gripe however, Arrow’s seventh season easily stands as one of the show’s best seasons to date, which only makes it more bittersweet that the series will be ending with its eighth and final season later this year. There is something to be said about going out on a high note however, and if Arrow can maintain most of this momentum during its upcoming season, the show is poised to end with a bang! The highly experimental approach to character storytelling, the many exciting threats, and the fantastic teases for both this year’s crossover and final season for Arrow, all amounted to a formerly flagging DC drama that’s once again at the top of its game! It turns out that some fresh blood is exactly what Arrow needed, since the change in showrunners has ended up working wonders for the series, which has now returned to being one of the best shows in The CW’s current programming lineup. It really seemed like Arrow’s best years were behind it for a while, but much like protagonist, Oliver Queen, Arrow should never truly be counted out, since it will always find a way to survive and thrive again, right to the bitter end…