NOTE: Spoilers from throughout the fifth season of, “The Flash” are present in this review

The Flash’s first attempt to move away from a speedster arch-villain went down with pretty mixed results during Season Four. After the increasingly contrived turns that too often founded the battle against Clifford DeVoe/The Thinker however, the show had a chance to change gears again, and start with another fresh direction in Season Five, providing another distinct threat for Team Flash, while also presenting a season set amid the backdrop of Barry’s and Iris’ future-era daughter, Nora West-Allen suddenly showing up in the present. All of the pieces were aligned to help The Flash re-invigorate itself, and move on from its problematic Season Four storytelling. Disappointingly however, that’s not what happened at all, with The Flash ultimately botching another season, sometimes with even worse results than what it put together with DeVoe!

Frustratingly, the arch-villain of The Flash’s fifth season once again proves to be its greatest Achilles’ Heel. The new main threat facing Team Flash in Season Five is Cicada, who was formerly meant to exist as serial killer, David Hersch, a dark matter-powered psychopath that the future-era Flash Museum claims is the only major villain that the Arrowverse’s heroes all collectively failed to stop. That’s intriguingly dangerous on its own, but the show immediately pulls the rug out from this storyline, when it’s quickly revealed that Nora’s running to the present has changed history, meaning that Hersch no longer becomes Cicada, and the mantle is instead inherited by Orlin Dwyer, a grief-stricken uncle of a comatose young girl, both of whom are affected by metahuman technology (yes, that’s a thing now), resulting from the exploded satellite that Barry and Nora destroyed during The Enlightenment.

Crafting an original villain out of an existing villain from DC Comics lore isn’t necessarily a terrible idea, but there are two major problems that constantly plague the Cicada storytelling during The Flash’s fifth season. The first is that the character is supposed to be a metahuman (not just wielding metahuman tech, like some of The Flash’s villains-of-the-week from this past season), yet constantly gets away because Barry conveniently gets negligent and forgets metahuman cuffs every time Cicada is cornered. The show had to keep forcing stupid excuses for Cicada’s constant escapes from Team Flash, and it quickly wore thin! The other major problem with the new Cicada is that the over-arching twist, while cool, quickly renders changing Cicada’s identity more or less completely pointless. It turns out that the altered Cicada was entirely planned by Eobard Thawne, the Reverse-Flash, who tricks Nora and Team Flash into destroying Cicada’s dagger in the present, the one thing de-powering Thawne before his execution in the future. That’s a really cool plan, but it also further deflates Cicada as an arch-villain, ultimately making him a stubborn patsy, even when a pointless ‘villain swap’ takes place later in the season, making an adult version of Dwyer’s comatose niece, Grace from the future show up as Cicada instead. Again, cool idea, but The Flash just never manages to do anything useful with it.

The whole Cicada mess is meant to tie into an ethical debate that The Flash’s fifth season also means to explore, that being a metahuman cure that Cisco and Caitlin invent, which could allow any metahuman in Central City to be permanently rid of their powers. The idea of debating whether or not to force a cure on Central City’s metahuman population is an interesting one, and one that does actually lead to some better storylines for the show during Season Five. Even the result of Cisco making the big decision to use the cure and give up his powers as Vibe during the season finale is a pretty great result, one that will both allow Cisco’s character to evolve during the seasons ahead, while also finally taking away an all-too-convenient Deus Ex Machina that The Flash has started to lean on as a crutch. I do wish however that the Snow family drama that tied into the metahuman cure wasn’t so trite and unsatisfying though. Finally meeting Caitlin’s estranged, thought-dead father this season, and making him the Arrowverse’s version of high-profile ice-themed villain, Icicle is another cool idea on paper, but Thomas Snow is dispatched so thanklessly, and ultimately makes so little impact on the show’s characters, including Caitlin, that one has to wonder why The Flash bothered to explore this storyline at all in the end.

Fortunately, the West-Allen family drama worked a little better for the most part, even if Nora’s character isn’t as endearing as she could be off the bat. By the end of the season, Nora does manage to evolve into a more inspiring and heroic character, but her over-the-top stupidity early in the season quickly begins to grate, especially for a character that’s supposed to be a brilliant CSI in the future, just as her father was in the present. Ultimately, this is yet another issue that comes down to poor plotting, relying far too much on forced melodrama between Barry, Iris and Nora, rather than organic, believable character conflicts. In fact, Barry spends way too much time acting like an impulsive, selfish moron throughout Season Five of The Flash too, which doesn’t exactly make him easy to root for! Sure, Barry did manage a few more heroic moments during this past season, but his behaviour towards his daughter was sometimes downright cruel, particularly when he drops her in the pipeline, and later the future, after learning that she interacted with Thawne in order to be inspired to meet her father. If there’s one thing that definitely needs to change during The Flash’s upcoming sixth season, it’s Barry’s intelligence level, because if you need to rely on your show’s lead hero being conveniently stupid when dealing with his future daughter and the latest arch-villain, simply to drag out the show’s current storyline to the requisite episode order, then your story is poor!

Finally, we also got a new Wells incarnation during The Flash’s fifth season, Sherloque Wells, a French-accented, highly arrogant and obviously Sherlock Holmes-inspired detective-themed Wells, who becomes indebted to Team Flash and conscripted into their services after they once again tap into the Multiverse to replace Harry. Sherloque is more or less a gag character, as well as a convenient device through which to eventually sniff out Nora’s supposed treachery, and doesn’t manage to go down as one of the better Harrison Wells incarnations, but he does have his moments. It’s actually Ralph that ends up working better in the detective role during Season Five though, after Ralph’s heroic experience as Elongated Man starts earnestly blending with his former police and P.I. knowledge, turning Ralph into a legitimate great mind, one that Team Flash too often underestimates throughout the season, in another bit of contrived drama and obstacles. Most of all, I’m really looking forward to seeing how Ralph keeps evolving during The Flash’s upcoming season, especially when he appears to be dusting off his old P.I. jacket now, just in time to meet his future wife, if the season finale tease is any indication. 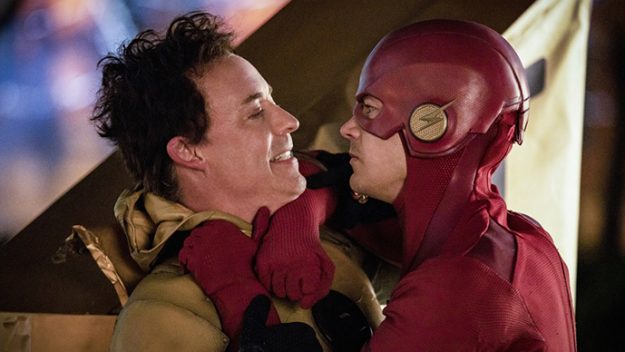 Speaking of that season finale, it’s actually one of the best episodes of an otherwise frustratingly weak season of The Flash, culminating in Thawne’s triumphant return to menace the Arrowverse, as well as Barry and Iris having to witness their daughter’s current incarnation perish after the timeline is changed, creating a genuine sense of tragedy and uncertainty for the well-meaning West-Allen family. This is all the more true as the future-era paper’s teased ‘Crisis’ now moves up to 2019! Again, we can at least now look forward to what’s hopefully a better sixth season for The Flash, after great story teases like this, but it’s still hard to get too excited, because this was the same position that The Flash was in after wrapping up its similarly disappointing fourth season. There are just so many missed opportunities in Season Five of The Flash, between its lacklustre family of arch-villains, its failure to capitalize on so many of its better story ideas, its constant need to make Barry, Nora and Iris in particular look bad in order to advance the plot, not to mention the fact that the show is still having trouble shaking old habits, like its frequently disposable villains-of-the-week. At least Cisco giving up his powers, Ralph coming into his own as a more noble detective, and Barry and Iris now finding renewed relationship conviction in the wake of their daughter’s inspiration and loss prevented the season from feeling like a total bust, but it seems like, once again, The Flash is in serious need of going back to the drawing board.

The Flash: Season Five Review
The Flash suffers through another frustratingly weak season, with Season Five ultimately suffering at the hands of its underwhelming villains, contrived melodrama and failure to capitalize on its otherwise good story ideas.
THE GOOD STUFF
THE NOT-SO-GOOD STUFF
2019-07-21
62%Overall Score
Reader Rating: (0 Votes)
0%