NOTE: Full spoilers for this episode of, “iZombie”, including a major character death, are present in this review

After temporarily stepping away from its procedural elements, iZombie returned with a much heavier emphasis on its detective work, following its latest case-of-the-week. “Filleted to Rest” brought forth another classic whodunit surrounding a murder victim that everyone supposedly hated, which is also paired with Liv being on another especially insufferable brain. Meanwhile, drama once again crops up at Fillmore-Graves, after several of Major’s soldiers end up massacred by a mysterious party, creating evidence that Major very likely has another traitor in his midst.

This week’s murder mystery is fortunately a pretty good one, once again tying effectively into the lingering problem of New Seattle’s growing human/zombie tensions. After an aggressive, perfectionist head chef is found murdered in her office, with her face covered by plastic wrap, Liv and Babineaux are on the case to determine who committed the crime. As I mentioned however, this is another case where everyone seemingly has a motive, with the victim tormenting all of her staff, and having such an insufferable personality that pretty much everyone wanted her dead. This is another frequent favourite storytelling template for iZombie’s cases, but thankfully, the entertaining writing still made Liv’s latest brain dive feel distinct, while also providing enough twists and turns to satisfy.

That latter point is key too, since iZombie’s more recent seasons have sometimes had a problem with crafting pretty good cases-of-the-week in terms of progression, but also crafting cases that stumble at the finish line with underwhelming or inexplicable killers behind them. In this case though, the procedural writing is pretty tight, with Liv’s brain humour excelling throughout the episode as well, just as the litany of suspects and red herrings also effectively keep viewers on their toes. The plot thickening by having brain-stealing involved, and zombie-specializing food preparation experts being suspected, also makes for an especially interesting case, one that comes around nicely to a culprit that ends up being a zombie posing as a human. This is a satisfying and nicely unexpected result, while also providing a good way to link iZombie’s procedural template with the larger zombie epidemic of New Seattle, and how it’s continuing to affect many civilians on the ground level.

While Liv is on perfectionist brain, she also ends up bumping into her mother at a hospital, where one of the suspects has to be questioned. The meeting feels a little forced at first, but Liv’s long-awaited reunion with her mother finally addresses Liv’s being disowned by her family so many seasons ago. It’s easy to forget that Liv’s mother and brother are still out there somewhere in New Seattle, and predictably, Liv’s mother is still sore about Liv refusing to donate blood to her then-dying brother, even after zombies have since become common knowledge in the city. Bigger than Liv reuniting with her mother however is Liv learning who her father truly is, a junkie named Martin Roberts, finally answering another long-running question that the series was no doubt always meaning to save for its final season. This twist also became even more dramatic when it’s revealed that Liv’s father is the mystery man behind the new zombie extremist group as well, with Liv showing up at his front door, right as he’s checking in with his cage full of fully-turned, mindless zombies!

Liv discovering who her father is at long last was complemented by a strong subplot for Major and Fillmore-Graves as well, after Major is given the news that several of his soldiers were killed by a mysterious mercenary unit. After one of the soldiers gets away, upon being suspected by Justin that he’s a traitor, Major later discovers the displaced soldier at his home, who outs Justin as the real traitor. Considering that Justin was formerly such a big part of the show, even being a former love interest of Liv’s at one point, it was genuinely heartbreaking to see him be the next traitor at Fillmore-Graves, with Major being forced to quickly and thanklessly put Justin down, after he nearly kills another Fillmore-Graves soldier that he takes hostage. It truly seems like no character is safe from the growing tensions between humans and zombies at this point, despite Major’s big supply victory against Stacey Boss and Don E. during the previous episode. Even with those criminal characters, alongside Blaine and Al, being absent in this episode, it was good to see that Major was still encountering plenty of drama at Fillmore-Graves nonetheless, as his own soldiers continue to question his loyalty and turn on him.

A remaining subplot centers around Ravi, though this one sadly turned out to be the weak point of the episode. After the Freylich brain story goes public, the enraged CDC head terminates the CDC’s partnership with Ravi, motivating Charli to work with Ravi in secret. When Ravi learns of a brewing family crisis with Charli soon afterward, he decides to help her reconnect with her estranged twin sister, Lila, a more directionless woman who doesn’t have her life together. Ravi helps the two sisters work things out in the end, further developing the long-distance bond between Ravi and Charli, though this didn’t really end up being any more than a dull filler storyline. I’m sure that there will be a payoff later, but with all of iZombie’s criminal characters sitting this episode out, it’s unsurprising that the show had to fill storytelling space. This is similarly evident when Michelle is transferred to Babineaux’s unit as his temporary detective replacement, in the mother of all coincidences, yet again. I swear that fate is actively trying to screw with Babineaux at this point! 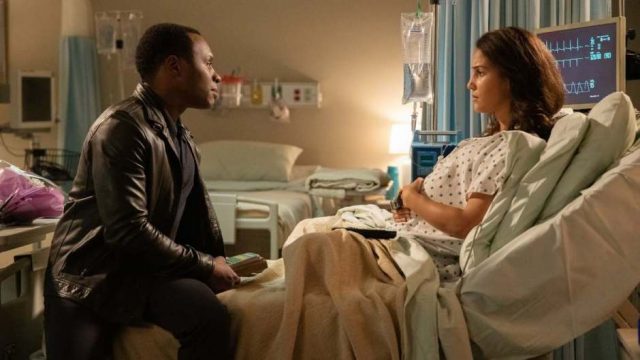 Still, “Filleted to Rest” makes for another very entertaining episode of iZombie, particularly in delivering one of this season’s best cases-of-the-week at this point. As much as Major having to put down Justin is pretty shocking and tragic, the development that will probably have fans buzzing most is the very surprising and well-executed reveal of Liv’s mystery father. Liv’s father being the head of the city’s new greatest menace is a wonderful twist to boot, one that the episode exceptionally saved for last. Even in taking a break from iZombie’s criminal storylines in this case, there’s plenty to chew on and enjoy in this episode, despite Ravi’s and Babineaux’s subplots getting a bit lost in the shuffle. Regardless, the hard developments suffered by Liv and Major helped to balance their more successful endeavours during the previous episode, while giving viewers a welcome chance to keep stewing on the next moves of Blaine in particular for a little while longer. I imagine that Blaine especially is not going to be idle for much longer though!

iZombie 5.7: "Filleted to Rest" Review
iZombie places heightened emphasis back on its procedural elements with, "Filleted to Rest", wrapping a strong case-of-the-week around some nicely shocking developments for Liv and Major.
THE GOOD STUFF
THE NOT-SO-GOOD STUFF
2019-08-06
84%Overall Score
Reader Rating: (0 Votes)
0%