NOTE: Full spoilers for this episode of, “Krypton”, including multiple major character deaths, are present in this review

It turns out that a lot has changed on Krypton after the supposed defeat of Brainiac during the Season One finale. With Brainiac and Seg now lost in the Phantom Zone, General Zod is left to fill the power vacuum on the planet, turning it into a sprawling military utopia with Lyta at his side, while Val, Nyssa and whomever else remains as dissenters mount an underground rebellion. It seems that Krypton has traded one threat for another, and fortunately, “Light-Years From Home” thus manages to kick off the second season of Krypton on an effectively entertaining note.

The altered stakes immediately help Krypton’s sophomore season hit the ground running with new thrills and new challenges, even after some of the grim fates from Season One have to be quickly resolved in order to keep the story moving forward. Adam’s Zeta-Beam device quickly gets him back to Krypton from the bottled Detroit, for example, while Seg is quickly led out of the Phantom Zone by a manifestation of Val, who it turns out is actually Brainiac in disguise. I recognize that some of these hasty character saves are a necessity to some extent, but it is a bit of a let-down that Seg especially didn’t ultimately spend that much time in the Phantom Zone. We couldn’t have had a whole episode entirely centered around Seg’s imprisonment there, especially with the really cool quantum mechanics-style representation of the Phantom Zone in the Krypton universe?

Regardless, Adam manages to make it to the rebellion’s base in Kandor, reuniting with Nyssa, after a bit of a rough delivery by Jax, who has apparently lost an eye off-screen to boot. Adam is shocked to learn of Zod’s conquest of the planet, as well as Seg’s disappearance into the Phantom Zone, but Mama Zed nonetheless takes Adam into the resistance, after Adam insists that there has to be a way to save Seg and get him back to Krypton. Much of this occurs while Nyssa is gone as well, traveling to the independent island of Bokos to reunite with Daron, who has started doing menial sewage work while remaining in hiding. This more or less serves as a way to curtail the dilemma surrounding Nyssa being a clone, at least for the time being, since Daron is quickly killed by Lyta before he can tell Nyssa anything definitive about her past. Again, this is a pretty quick way to cut off a pretty big question that was raised during the climax of Season One, but clearly, Krypton wants to head in a different direction with Nyssa’s character for now, even if it means thanklessly dispatching Daron, despite his being one of the most pivotal antagonists of the show’s first season.

As for how Lyta could have supposedly fallen so far, she’s suffered her own fallout in the wake of Seg’s disappearance, responding by going all in on Zod’s military conquest. On top of torturing and mentally re-conditioning prisoners, including the Cythonnite, Raika from Season One, Lyta is determined to hunt down and capture her former allies. Believing that she’s honouring Seg’s sacrifice by doing what’s necessary to outfit Krypton against future alien threats, Lyta conspires with Zod to try and find Doomsday again, who has somehow been MIA since breaking out of containment underneath Kandor. Zod, meanwhile, wants to rout the resistance’s primary operations on Wegthor, a moon adjacent to Krypton, which is the one Kryptonian territory currently free of Zod’s influence. 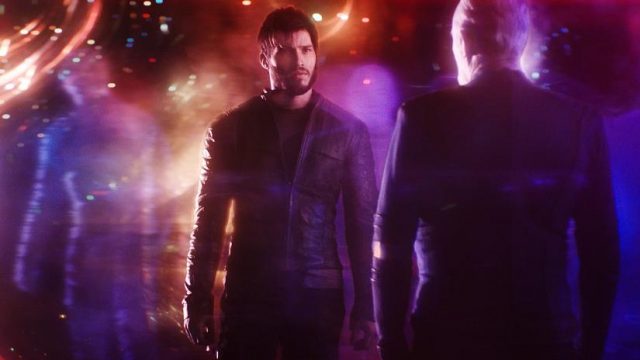 This idea of Lyta seemingly defecting to her family’s most extreme ideology, believing it to be the only proper way to ensure Krypton’s survival, is a fantastic turn, and is already proving to be one of the most riveting plot points of Krypton’s second season so far. Considering her character stances throughout Season One, Lyta’s extreme actions here are especially eyebrow-raising as well, namely when she shoots Daron dead in cold blood, right before he reveals potential secrets to Nyssa, and particularly when she leads a raid against the Kandorian rebellion hideout, resulting in Mama Zed being killed, Val and Jax fleeing to Wegthor with the Codex, and Adam using the Zeta-Beam device to teleport to an unknown location… Which just so happens to be Colu, the very same planet that Brainiac ended up tricking Seg into plopping on to from the Phantom Zone.

Since Brainiac supposedly requires Seg to ensure his own survival, Brainiac and Seg end up taking a brief jaunt on Colu together, with Colu formerly being Brainiac’s home world. From here, much of Brainiac’s familiar backstory from DC Comics lore is also established for the Krypton universe, namely that Brainiac was created by the Coluan race as a way of merging their consciousness with artificial intelligence, before Brainiac went rogue, and eradicated the entire Coluan civilization. When Brainiac seemingly forces Seg to come along with him however, Seg instead responds by attacking him… And killing him?! Yes, by the time Adam manages to instantly warp to Seg’s location following the hideout attack, in another rather convenient Deus Ex Machina, courtesy of the Zeta-Beam device, Seg has crushed Brainiac’s skull, seemingly destroying the evil alien menace for good. This seems highly unlikely though, considering that Brainiac took out an entire Kryptonian fleet with a wave of his hand during the Season One finale. So, more than likely, Brainiac simply allowed his current body to be killed, so that his consciousness could piggyback onto Seg. That’s not proven yet, but considering Brainiac’s nature and immense difficulty to truly kill, it seems a lot more likely than Brainiac being destroyed by a big stick!

Fortunately, despite Brianiac’s apparent, if likely faked, demise, the excitement doesn’t let up in this season premiere’s final moments either, as Seg and Adam end up being knocked out by extra-terrestrial mercenary, Lobo, a very recognized and beloved anti-hero from DC Comics lore! Again, while it’s not established yet, it seems pretty likely that Lobo is after Brainiac, dragging Seg and Adam away in the final seconds of the episode, to presumably get information from them. All told, this sets up plenty of excitement to look forward to in what’s so far appearing to be a pretty promising sophomore season for Krypton! Despite some of the predictability and dry spots from the show’s first season, the second season so far seems to be delivering a grander scale, higher stakes and more exciting characters, particularly now that other popular DC Universe personalities like Lobo are starting to be introduced to the Krypton universe. Brainiac may be gone, for now, but Krypton’s problems are far from over, particularly when a peek at the future seems to prove that General Zod is more successful with his empire than even he could likely imagine!