Now with Flex Mentallo fully restored to his former self, albeit reeling from the unexpected loss of his wife, Dolores, the Doom Patrol finally have everything they need to take the fight to Mr. Nobody, and reclaim The Chief. “Penultimate Patrol” effectively puts Doom Patrol full stop on the path to its Season One climax, as the team takes Flex along with them in an effort to get into the ‘White Space’, where Mr. Nobody is said to hide. At the same time, Vic remains separated from his teammates, continuing to help tend to Silas at the hospital, while also reflecting on his choices, only to eventually discover a horrible secret that was being kept from him for years.

As with Doom Patrol’s previous episode, which also dropped on Crave for us Canadians simultaneously with this one, “Penultimate Patrol” makes for a superb offering overall, presenting lots of zany humour to go along with the genuine terror of facing off against Mr. Nobody on his own turf. The episode even provides an interesting cold open to this effect, showing Mr. Nobody back during his pre-powered days as Eric Morden, back in 1946. Apparently, Morden washed out and was fired from the Brotherhood of Evil, and is subsequently dumped by his girlfriend, Millie, who declares that he’s a loser, and a true, “Nobody”, one who will never truly be on top. This is what seemingly spurs Morden into volunteering under Heinrich Von Fuchs and gaining his virtual omnipotence, which the episode nicely brings back around with the Doom Patrol later on, once they express jeering pity towards the villain’s, “Basic” backstory.

Before that however, the team must still get to the White Space. This is handily done with a return to Danny the Street, who enthusiastically greets Flex alongside Larry, with Flex and Danny apparently having their own history of knowing each other. Apparently, the Beard Hunter’s last known coordinates are on Danny, but when the team confronts Ernest, he appears to have given up the ‘Beard Hunter’ mantle, and is no longer actively hunting The Chief. This results in a sudden confession by Danny that they know about The Chief being in the White Space the whole time, but didn’t want to mention it until Flex was around, for fear of angering Mr. Nobody. Fortunately, using one of his many muscle-based reality-altering powers, Flex can warp the Doom Patrol straight into the White Space!… After a gut-bustingly hilarious false start wherein Flex accidentally makes everyone on Danny, including Danny themselves, and every Doom Patrol member save for Cliff (since he can’t feel anything), to ‘suffer’ an over-the-top glorious orgasm in unison, in what’s easily one of the best extended jokes from this entire season!

The rushed result of Danny suddenly declaring that they knew about the White Space the whole time, and Flex quickly burying his anguish over Dolores, is the only small sore point in this episode. This naturally means that the show has to suddenly move away from these ongoing conflicts, in favour of dropping the Doom Patrol members into the White Space as quickly as possible, so they can have a proper showdown with Mr. Nobody. This creatively begins with all of them getting a hell of an offer too; Being returned to their old lives, never getting their powers, and losing all memory of The Chief, or being in the Doom Patrol. This seemingly tempts all of the show’s present heroes at first, but it’s heartwarming to see all of the Doom Patrol’s members react to their positive growth by fully walking away from the chance to ever be normal or celebrated again, deciding to keep taking the fight to Mr. Nobody, even if it means sacrificing everything that they once loved for good. 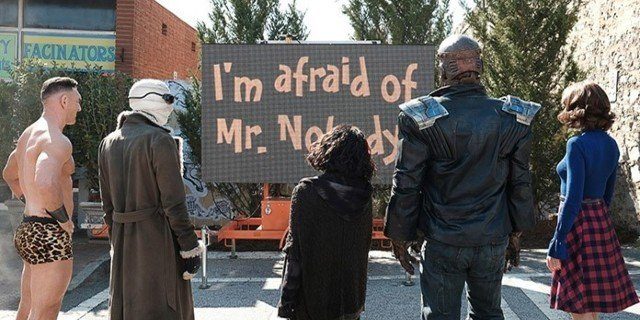 This moment is in turn further enhanced by Rita seizing control of the narration from Mr. Nobody, which allows the Doom Patrol’s members to come back together, including The Chief! The reunion that the show has built up all season has finally occurred, for the most part, even though Vic is initially set aside within his own subplot. Mr. Nobody then responds to the Doom Patrol coming back together by plunking them in a loop, wherein The Chief is forced to watch the Doom Patrol members die over and over again at the hands of the giant robot that Mr. Nobody originally made for the Brotherhood of Evil. Mr. Nobody even initially fakes his death in the process, appearing to be destroyed by Vic, only to later reveal that he truly cannot be killed, but the Doom Patrol could potentially be rid of him forever. This will seemingly play into the subsequent true season finale for Doom Patrol, which, again, was released on Crave at the exact same time as this episode, and the previous one, for us Canadians. It’s a good thing too, because this episode ends with a hell of a bombshell from The Chief; The ‘accidents’ that created the Doom Patrol were not accidents at all, and were masterminded by The Chief right from the beginning! Oh, damn…

Nonetheless, this just leaves this episode’s lone subplot with Vic and Silas, as Vic continues to lament almost beating his father to death at the Ant Farm. This subplot smartly injects the requisite slice of drama and tragedy into what’s otherwise a very over-the-top and funny Doom Patrol episode, as Vic is forced to confront what he’s done to Silas, after Silas finally awakens. To Vic’s shock and horror however, and despite Mr. Nobody’s own lies, Silas confesses that he did indeed mess with Vic’s memories soon afterward. Apparently, when Silas found Vic after the lab explosion, Vic’s mother was still alive! With both his wife and his son mortally wounded, Silas could only save one of them, and between the insistence of The Chief, and Silas’ own beliefs on what his wife would want, he chose Vic to receive the cybernetic upgrades that ultimately saved his life, and turned him into Cyborg. This naturally results in Vic storming out of the hospital in anger, allowing him to conveniently join the rest of the Doom Patrol in the White Space later on. It also provides a pretty good hook for Doom Patrol’s upcoming second season next year, when Vic will probably have to confront this latest heartbreaking revelation from Silas in earnest.

For now though, “Penultimate Patrol” continues to bring Doom Patrol’s first season towards an excellent and highly entertaining climax, even as Mr. Nobody himself keeps pointing out that the show is frustratingly defying supposed audience demands for a good old-fashioned superhero, “Punch-up.” Nonetheless, Doom Patrol continues to elevate itself on its creative storytelling and tragic, yet weirdly uplifting character portraits, particularly as the team must face the chance to return to their normal lives, as if the past several decades never happened for them, and ultimately reject that chance. Mr. Nobody clearly has at least one last trick up his sleeve for the upcoming proper season finale, so as long as Doom Patrol can stick that landing, it will officially stand as not only the best current original series to come from the DC Universe streaming app at this point, but one of the best superhero dramas that television currently has to offer, period!