Now that The Chief’s earth-shattering secret has found its way to his team, the heroes of Doom Patrol have lost their resolve. “Ezekiel Patrol” thus takes a somewhat unexpected direction for a season finale, namely by dividing its heroes, having them quit their heroic identities, and then having them come back together to combat a truly larger-than-life threat, all in one episode. This results in a beefy and initially methodical method of storytelling, but as is common for Doom Patrol, the payoff is well worth it, cementing, “Ezekiel Patrol” as an overall excellent season finale, one that leaves the show primed and ready for an even more exciting and ambitious second season next year!

Now that The Chief has admitted to causing the supposed accidents that gave each of the Doom Patrol members their conditions, the first season finale for Doom Patrol begins with the team having gone their separate ways. Rita and Larry have since gotten a quaint place together, with Rita paying the bills as a maligned high school drama teacher, Jane has become a homeless drug addict, and Cliff also appears to live on the streets, leaving Jane meals from a nearby food truck in secret. Vic has gone back to doing superhero work on an internet-sized scale for Silas as well, apparently tracking a BitCoin laundering scheme, and seemingly being the best off among the former Doom Patrol’s members. Things initially seem grim and unfulfilling for everyone aside from Vic especially, but eventually, The Chief finds a way to unite his old team, after a long narrative examination of how their ‘accidents’ were ultimately organized at the Bureau of Normalcy and its, “Immortus Project.” 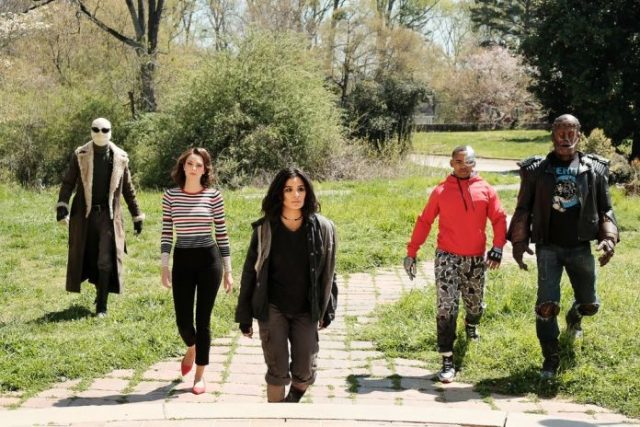 Beginning with The Chief’s forces creating the experimental water vapours and staging accident that led to Rita’s transformation into Elasti-Woman during the 1950’s, Rita’s readings eventually inspire The Chief to try an experiment with negative energy, authorizing the sabotage of one Larry Trainor’s plane during a test flight, whom The Chief would eventually get custody of, after the Bureau of Normalcy was done torturing him. We see Rita and Larry then initially function as solid companions for The Chief at Doom Manor, well into the 1970’s, though this is interrupted when an old request by The Chief is greenlit almost a decade after it’s made, resulting in the experiments that would turn Kay Challis into Crazy Jane. The hardest ‘accident’ however comes in the 1980’s, when The Chief had to improvise after Cliff Steele dodged a crash that was supposed to leave him mortally injured on the racetrack, only to instead accidentally kill his wife during another crash on the road, which, as we know, is what allowed The Chief to turn Cliff into Robotman. Seeing The Chief get gradually worn down and struggle with his conscience as the mission goes on is really dramatic and heart-wrenching, especially when we learn exactly what his reasons were later in the episode.

Once the various Doom Patrol members begin hearing Chumbawumba’s iconic 1990’s tune, “Tubthumping” everywhere they go, they’re eventually led back to Doom Manor, where The Chief explains his motives for his decades-long, life altering experiments on the team– The Chief has a secret daughter, one that he entrusted to Danny the Street (thus explaining how The Chief knows Danny), because she possesses dangerous metahuman abilities. Danny, along with The Chief’s daughter, has since been imprisoned inside of a painting however, where Mr. Nobody has enlisted the help of Ezekiel the Cockroach and Admiral Whiskers to finally achieve renewed purpose as the arch-nemesis of the Doom Patrol! The team decides to save Danny and The Chief’s daughter from the painting at this point, though they declare that they aren’t doing it for The Chief himself. Regardless, The Chief joins his creations in the painting, for the final showdown of the season. 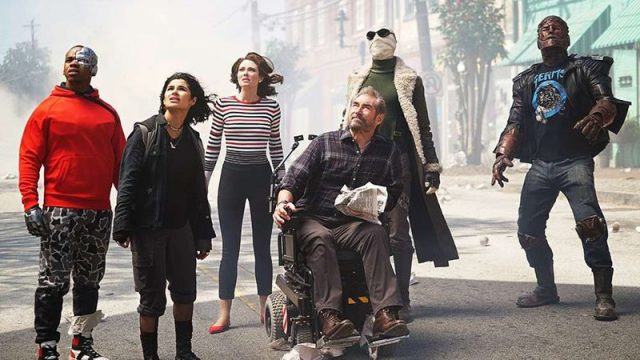 There’s another twist inevitably waiting for the Doom Patrol however, namely the fact that Ezekiel and Admiral Whiskers have somehow been turned into gigantic, Kaiju-like versions of themselves, wanting to bring about destruction and terror, starting with Danny the Street! It turns out that the former Beard Hunter, Ernest Franklin was also the one who called the Doom Patrol into the painting, using the karaoke bar, where a washed-up Mr. Nobody also drinks away his sorrows, having been ousted from his own evil plot by his former animal buddies. It’s a scenario both ridiculous and weirdly terrifying, but the Doom Patrol thus formulate a plan, even enlisting the help of Mr. Nobody to stop Ezekiel and Admiral Whiskers! This begins with Vic and Rita being intentionally eaten by Ezekiel, even if Cliff has to take an inconvenient detour through Admiral Whiskers’ innards instead.

All the while, Jane goes with The Chief to meet The Chief’s mysterious daughter, whom she must coax out of the hidden room that the Beard Hunter originally tried to get into, several episodes ago. Jane and The Chief don’t ultimately get to participate in the final battle against Ezekiel and Admiral Whiskers because of this, which is kind of a shame, but there’s nonetheless plenty of humour and excitement to go around with the other characters. Mr. Nobody giving Cliff passage into Ezekiel by using his narration to make Ezekiel and Admiral Whiskers make out is pretty hilarious most of all, but it turns out that climbing into Ezekiel is quite important, since Danny the Street is about to be nuked by some unknown force! This primarily comes by way of Larry, who uses his negative energy spirit to open a dimensional hole, which eventually allows Danny to escape the painting, before Danny is then transformed into a brick. Mr. Nobody forgets to bail himself and the Beard Hunter out of Danny beforehand however, causing both of them to be seemingly trapped in White Space left by the painting, which also leaves a shrunken Doom Patrol to quickly and easily cut their way out of Ezekiel’s stomach. This happens shortly before a regular-sized Larry, who avoided being shrunk because he had to manipulate the negative energy needed to stop the giant animals, informs the team that they’re tiny, leaving them victorious, but also still in dire straits by their own outside-the-box thinking!

This funny and unexpected final twist provides an amusing and surprisingly satisfying way to cap off Doom Patrol’s first season, particularly when The Chief’s daughter is revealed to be this universe’s version of Dorothy Spinner, a recognizable Doom Patrol personality from DC Comics lore, who can create ‘imaginary friends’ at her whim. The show’s current threats nonetheless seem to have been stopped though, particularly with Mr. Nobody and the Beard Hunter being left conveniently frozen in White Space, in case Doom Patrol’s upcoming sophomore season comes up with interesting new ideas for their characters. I certainly hope it does as well, particularly since, “Ezekiel Patrol” leaves Doom Patrol excelling more than ever with the conclusion of its first season! Even with The Chief having been found, and his dirty secret having come out, normal lives just don’t seem to be in the cards for the Doom Patrol, who just seem to keep finding constant new and unpredictable challenges in their way. I guess if there’s one upside to the team’s forced immortality however, it’s the fact that it’s doubtful that any of them will ever be bored again, now that they seem to be back to embracing the most bizarre and inexplicable elements of their world.