After Preacher’s fourth and final season started with a first half for its premiere that hit the ground running, providing a thrilling assault on the Grail’s headquarters by Jesse and Tulip, the second half of the season premiere slowed down quite a lot, in favour of once again going for a more character-focused episode. “Last Supper” still has enough moments of twisted humour and offbeat surprises to keep it plenty engaging, but it’s also tough to deny that it’s significantly less thrilling than the first season premiere episode, particularly when many of the characters’ storylines advanced surprisingly slowly, after the show’s three lead protagonists have all separated again.

We still don’t quite know why Jesse had to up and leave Tulip, beyond presumably for some unspecified reason relating to saving the world, but regardless, he ends up hitching a ride with a former porn star, who agrees to take him to the airport. After witnessing a young boy seemingly mourning over his dead dog however, Jesse ditches his ride, only to be robbed by the boy at gunpoint. This is merely the first in a series of misadventures by Jesse, who finds that the path forward is anything but easy! Still, this at least provided a nice chance to see Jesse’s perfectly split moral compass at play, even if Jesse insisting on helping a random boy on the side of the road, and letting his ride leave to do so, felt rather careless and out-of-character. 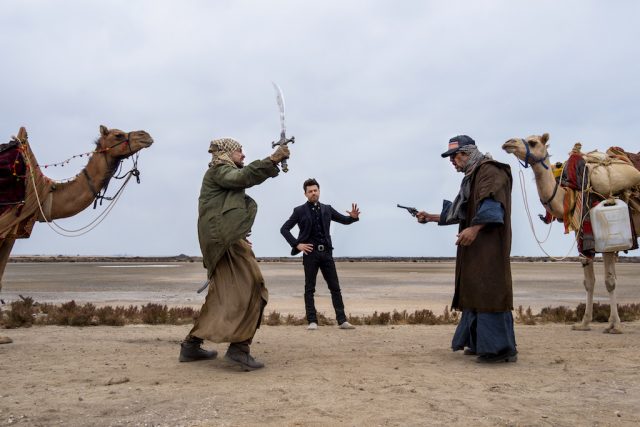 In fact, the only reason that this takes place is to transparently move the story to where it needs to go, even if it doesn’t flow completely reasonably. On top of Jesse losing his shoes to the mourning boy after Jesse’s Genesis command accidentally leads to the boy killing his dog for real, before Jesse’s next Genesis command sees two arguing Middle-Eastern citizens kill each other in a bizarre murder-suicide, Jesse finally manages to reach the airport on foot… Only to find that he forgot his lighter in the truck that originally picked him up. Yes, even by the standards of Preacher, this felt like a bizarre and contrived series of events, one that eventually culminates in Jesse enlisting a pilot to retrieve the lighter with him, before he’s forced to intervene at the Jesus De Sade entertainment house that the former porn star was from, after it appears that children are being abused there. We don’t exactly see what happens at this point, but we do see that Jesse earns himself a private flight to Australia in the end, one that is apparently overseen by God, who also appears to have had a direct hand in events at both Annville and Angelville, go figure.

The rest of the episode largely unfolds at and around Masada, with Tulip trying to break in, and Cassidy trying to break out on his own terms. Disappointingly, Cassidy got saddled with the weakest subplot in this episode, especially when the show doesn’t do much of anything to justify why he didn’t just leave with Jesse. After all, even if Cassidy hated Jesse, staying behind to get tortured and not accomplish much else just feels head-scratching. There’s a slight implication that Cassidy is staying there because he feels he deserves punishment, but the show never really does anything with this suggestion. Instead, Cassidy chews his own foot off in prison, escapes, finds a disguise related to drugs, gets high on said drugs, and then botches his escape attempt because of these drugs. Thus, this subplot ends up feeling like a total waste of time, and that’s frustrating, considering that Cassidy has often had many of the best subplots on this show. 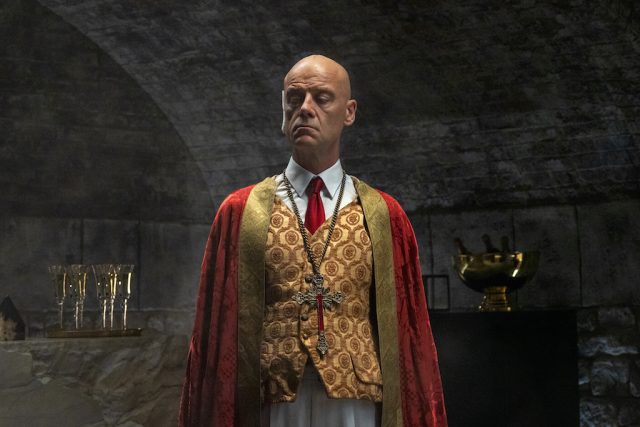 Fortunately, Tulip fares a bit better, even if her storyline also feels needlessly drawn-out. Tulip spends most of the episode trying and failing to formulate plans to break into Masada, posing as a grieving widow to one of the locals, where she hides out in a garage. Despite Featherstone poking around at the nearby Holy Bar and Grail, Tulip manages to escape detection too, at least for a little while. Once Tulip enacts a plan that intentionally calls Featherstone to her location, she drives off, single-handedly taking out various Grail vehicles at the bottom of a gorge in an admittedly fun and zany series of action sequences, until she appears to flee, with Featherstone unable to pursue her. Apparently though, this was all a ploy, put into action by Tulip, so that she could sneak into Masada, posing as an injured Grail agent. That’s well and good, though this did end up being a rather convoluted plan, one that mainly felt like it was put together to fill space in the episode, since Tulip clearly didn’t have much more to do than Cassidy in this case.

“Last Supper” also provides a few highlight moments with Herr Starr, now promoted to being Allfather of the Grail, namely when he forces New Zealand’s president to get shut in a box and blown up for asking too much about when the Messiah will be revealed to the world, as well as appearing to staple one of Cassidy’s discarded foreskins to his missing ear. Those little shining moments of offbeat humour managed to crop up with Jesse too, even if Jesse also couldn’t escape a slight air of wasting time in this episode. It’s too bad that the second half of Preacher’s final season premiere felt like it was largely spinning its wheels, with little in the way of significant story development happening until the very end of the episode. Still, for what it’s worth, Tulip has infiltrated Masada again, this time alone, and Jesse has finally found his way to where he needs to go next. Cassidy however might as well have sat this episode out, since he’s still doing little more than getting his foreskins hacked off in the name of Grail education. Hopefully, Cassidy especially finds something better to do in the next episode.

Preacher 4.2: "Last Supper" Review
Preacher's momentum slows down considerably in the second half of its final season premiere, "Last Supper", which has the characters taking roundabout routes to their next objectives.
THE GOOD STUFF
THE NOT-SO-GOOD STUFF
2019-09-29
77%Overall Score
Reader Rating: (0 Votes)
0%