After such a fantastically bloody and exciting confrontation with Doomsday during the previous episode, it was inevitable that Krypton’s second season finale would have a bit of trouble recapturing that same degree of thrills. Despite that however, “The Alpha and the Omega” still manages to be a plenty interesting end to Krypton’s sophomore season, even if the show’s premature cancellation by Syfy definitely ends up dinging the episode in many respects, due to its sheer number of cliffhangers that extensively tease a third season, which now likely won’t happen.

These cliffhangers start occurring pretty early on as well, as it’s determined that Adam’s legs aren’t just broken, but are permanently damaged, leaving Adam completely unable to walk. This leaves Adam completely helpless to stop Nyssa from absconding with his Zeta-Beam device as well, which even Val fails to stop from happening, leaving Nyssa whisked off to Rann, the home planet of Adam’s oft-referenced Zeta-Beam handler, Sardath. While Nyssa’s entire subplot is little more than an extended tease for a third season that Syfy has ultimately passed on, making it sting quite a lot, it is a neat look at what might have been, and what could be, should Krypton ultimately be revived on another network/platform. While seeing Rann’s citizens getting slaughtered, Nyssa also encounters an omega symbol (the showrunners have clarified that this is a tease for the Omega Men, not Darkseid, as many Superman fans would no doubt initially believe), before seeing a bunch of winged creatures in the air (again, these are Thanagarians according to the showrunners, not Darkseid’s Parademons, as it would initially appear). It’s very cool, but it really hurts that we will likely never see what comes of this.

Fortunately, over on Krypton proper, Seg, Val and the rest of the rebel forces reunite in the Outlands, in an effort to formulate one final plan to bring Zod down once and for all. With Zod’s entire army now marching on the outpost where the rebels currently hide, Seg deduces that this would logically leave Kandor relatively unguarded. His plan thus involves going to Kandor to confront Zod directly, which he does, alongside Lyta. The revelation of Lyta being alive helps to convince the citizens and the Saggitari alike that Zod has deceived and betrayed his people, immediately causing Zod’s forces to lay down their arms. This seems a little too easy though, and it’s a bit evident that Krypton didn’t have much of an exit strategy regarding Zod’s iron grip on Kandor, and the planet at large. Still, I suppose we had to do something to get the proper final confrontation of the season underway.

Like I said, the final battle of Krypton’s second season can’t quite recapture the sheer violent spectacle of the battle against Doomsday from the previous episode, but it still manages to provide a fairly exciting climax from the perspective of the emotional struggle against Zod, at the very least. This involves Seg goading Zod into a one-on-one fight with him upon the streets of Kandor, which Seg quickly finds himself on the losing end of. This leads to Lyta joining Seg however, and the two subsequently overpower Zod, which also leads to the Saggitari engaging the rebels in the Outlands to retreat. Again, this is perhaps an overly easy solution to the Zod problem, especially when Seg nearly beating Zod to death ultimately goes nowhere. Still, the solution of placing Zod under the influence of the Black Mercy as imprisonment feels like fitting poetic justice for his character, while also preventing Seg and Lyta from having to kill their future son at the same time. 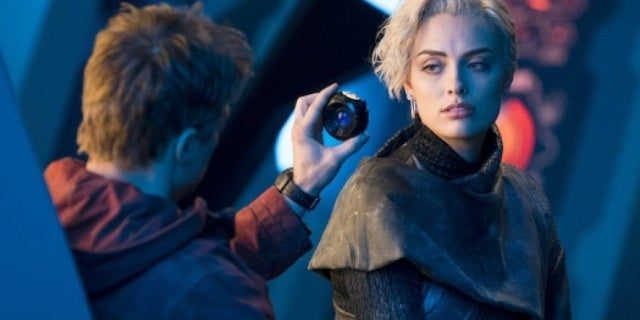 Yes, things really are wrapped up that cleanly. The cliffhangers for a now-endangered third season are plentiful and exciting as well, which also makes them a little painful to watch in succession. These include Adam receiving a leg brace that effectively allows him to walk again, which is essentially his recognizable costume and jetpack from DC Comics lore, and this certainly would have served as a nice complement to Nyssa now finding herself on Rann, thanks to Adam’s Zeta-Beam device. Jayna and Dev also discover that Doomsday is still not destroyed during a routine inspection of some meteorites from Wegthor as well, confirming that the frozen Doomsday is still alive on Krypton, despite the fact that he can no longer be exploited by Zod. Finally, Lobo also makes his long-awaited return (which proves to me that this season really didn’t have enough Lobo in it), informing Seg that Brainiac remains alive, to which Seg proposes a team-up, since he also needs to retrieve his infant son. Shortly after Seg and Lobo reluctantly agree to an alliance as well, Brainiac is shown to be taking the infant Jor-El to Earth, likely to see his Kryptonian powers manifest, for good or for ill!

Indeed, a third season for Krypton probably would have been pretty awesome, if these teases are any indication. To add insult to injury, the second season of Krypton has been overall superb too, easily standing head-and-shoulders above the good, but not exceptional first season. There’s still a chance that Krypton could be resurrected on another network or platform, and hell, Warner Bros. could very easily revive the show on their own DC Universe and/or HBO Max streaming platforms as well (even if this likely means that the budget will take a significant hit), but for now, “The Alpha and the Omega” at least provides a solid end to a great season. All of those currently-unresolved cliffhangers end up hurting this episode to some degree, since this season (and likely series) finale ends up spending quite a lot of its runtime teasing a third season that will probably not happen now, but at least we got a mostly cool and fitting defeat for Zod, while also establishing that Krypton has plenty of story momentum left to explore, should the series be successfully revived in the months ahead. Syfy cut Krypton down far too soon, but regardless, it’s now definitely poised to join the library of great Superman Family-themed TV shows, which is all the more reason why I hope that this second season finale is not the last we see of Seg-El and his allies.

Krypton 2.10: "The Alpha and the Omega" Review
Krypton's second season finale suffers a bit from its many unresolved teases for a highly threatened third season, but it still provides a mostly satisfying end to the battle against General Zod.
THE GOOD STUFF
THE NOT-SO-GOOD STUFF
2019-10-01
83%Overall Score
Reader Rating: (0 Votes)
0%