It’s the end of the line for Legion, and we have quite the climactic confrontation ready to unfold throughout the show’s series finale! As both the past and present Amahl Farouk prepare to square off against David Haller and his famous father, Charles Xavier, Syd and Kerry continue to relentlessly fight off Time Eaters, complete with Cary now being the one to step inside of Kerry’s body! There’s a solid dose of thrills all around, though it’s also true that Legion’s persistent desire to subvert expectations ends up working both for and against this final episode for FX’s eccentric X-Men offshoot.

The core storyline of the episode begins with something of a proper battle, after David and Charles discover that Farouk has met his present-era self, and the two now stand against the Xavier family telepaths. Before that though, we get an all-too-brief indication of exactly what Charles thinks of David’s mental illness. After becoming briefly trapped in his son’s mind, Charles witnesses all of David’s Legion personalities starting to pour out in the mental space, forcing Charles to keep trying to push them all away, and thus confronting his abandonment of David in terrifying fashion! This feels like a story arc that deserved more time to breathe, since the reconciliation between David and his father feels too hasty and cleanly resolved, but at least David did manage to get his happy ending with Charles, even if Charles still feels like a far cry from the character we’ve come to recognize from most other Marvel media, including Fox’s own X-Men movies.

With David and Charles now united and ready to destroy the Shadow King(s) once and for all though, David surprisingly ends up taking on the past-era Farouk, pulling him away into another mental space, before the present-era Farouk ends up disappearing into the Astral Plane with Charles. This is immediately a pretty interesting switch, though most of the actual conflict comes from David’s end. After Farouk torments David into giving up on himself, an extended musical number sorts that out (because of course it does), allowing David to eventually come out on top in the conflict, and nearly take his revenge! It’s a long, hard-earned moment for David’s increasingly obsessed character, and would also come with the handy side effect of eliminating the present-era Farouk as well, handily solving another problem for Charles…

… Or so it would initially seem. Despite Charles being ready for a fight with the present-era Farouk after they go to the Astral Plane, the present-era Farouk instead presents him with a drink, saying that he’s grown weary of the same old mental war. This is perhaps the most subversive element to Legion’s final episode, and it’s bound to generate mixed opinions from X-Men fans especially. Nonetheless, Farouk’s time in David’s mind, and David’s indirect influence over Farouk’s own experiences, once he finally separated from David’s mind, has given Farouk a new sense of perspective, allowing him to mature, and no longer want to mindlessly crave power. It’s not exactly true to the style of the Shadow King from Marvel Comics lore, but it is a nice way to illustrate one of Legion’s over-arching themes; Suffering is difficult, but it can sometimes lead to greater good for others, not just oneself. This ultimately leads to Charles talking David down from killing the past Farouk, declaring that the Xavier family’s long battle against the Shadow King is finally over for good. 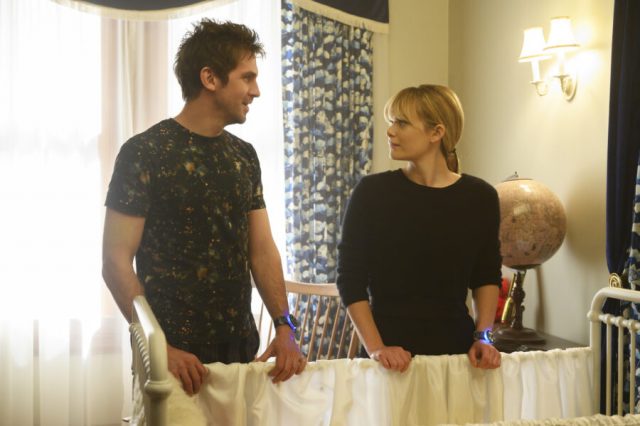 This contrasts a bit with the other dose of action in this series finale though, namely when an increasingly aged Kerry keeps fighting off Time Eaters, in order to protect the infant David. The Time Eaters are endless however, and despite Kerry’s and Syd’s best efforts, they are eventually overwhelmed by the beasts, and are about to be taken out of time. Surprisingly though, Switch ends up coming to their aid, having seemingly died from her injuries, only to be reborn as a fourth-dimensional being. Yes, in an unexpected twist, Switch was never truly a mutant, but was actually a time guardian-in-training, whose father has the ability to call the Time Eaters off, once it’s determined that intrusions in time are not destructive. Again, this feels a bit too easy, and definitely doesn’t connect with the original prophecy of David somehow destroying the world, which supposedly came from Syd herself in the future, but regardless, this is a fair enough way to get rid of the Time Eaters, I guess.

So, with everything resolved, all that’s left is for the leads to realize that their time together, including David’s and Syd’s relationship, is about to be erased from the new timeline. This allows David and Syd to share one last moment together, resigned to the fact that they’re about to lead very different lives. David at least has renewed hope however, now that Charles and Gabrielle have resolved to never give him away, and to raise David as a united family. Again, this openly contradicts the lore from Fox’s X-Men movies, but like I said previously, it seems pretty obvious that Legion was ultimately taken out of Fox’s proper live-action X-Men canon, and left to do its own thing in a private parallel universe, where the canon of the X-Men movies, the Wolverine movies, the Deadpool movies and/or FOX’s The Gifted series won’t intrude on it. On one last note, an aged Kerry also shares a final embrace with Cary in turn, before their history is also re-written, thus wrapping up all of the leads’ story arcs, well, save for Ptonomy, but I guess he was already dead and in a machine body anyway.

Presumably, deceased characters like Ptonomy, Lenny and Clark are also allowed to re-live their lives at this point, and perhaps Oliver and Melanie no longer get stuck in the Astral Plane in this case, though I guess this would also logically mean that the war between mutants and Division 3 is back on, in some unknown future that we’ll never see. Either way, there’s some quick fixes and ambiguity in, “Chapter 27”, which not everyone will find fully satisfying, but I suppose a slight element of ambiguity and interpretation is the only logical resolution that a relentlessly strange show like Legion could invite. It does also feel fitting that we don’t ultimately know for sure if David becomes a better person than he did under Farouk’s influence either. He may very well become the same twisted and violent ‘world-killer’ that he was before. David’s ultimate fate, along with everyone else’s, is thus left up to the audience’s imagination, and that’s no doubt the best possible narrative choice. Legion certainly doesn’t spoon-feed the viewer any easy answers before its final conclusion, but I suppose the show also went out on the exact terms that it wanted to, and that’s definitely something to respect.