After its creative mockumentary-style midseason premiere from the previous week, Fear the Walking Dead takes us to another distinct and interesting new location in, “210 Words Per Minute.” After Morgan’s crew receives a message from a dying man who has been bitten by a walker, tipping them off to the many supplies in an abandoned shopping mall, Morgan, Dwight and Grace decide to make a trip to the mall to put the man out of his misery, while also securing more supplies for their convoy. A large chunk of lead characters sit out this episode, but the reduced focus proves effective here regardless, particularly when it allows us to spotlight the budding romance that’s appearing to grow between Morgan and Grace.

The trip around the abandoned mall makes for a compelling setting as well, even if Grace ends up fainting not long after the trio arrives, which is quickly followed by walkers finding their way into the mall. This presents an interesting scenario for the survivors, particularly after Dwight branches off to go make contact with Daniel, after Daniel reveals over the walkie that Logan’s survivors have set up defenses at nearby truck stops. Morgan, meanwhile, tends to the ailing Grace, who recalls that there is an urgent care facility in the mall, which could help her determine whether or not she has cancer, or some other radiation-related ailment.

For the most part, this is a pretty good episode of Fear the Walking Dead, especially when it manages to have so many standout character moments. That being said however, the writing still suffers a bit here and there, since the storyline occasionally has to be moved forward by characters acting stupid and reckless, falling into that usual trap that AMC’s The Walking Dead universe sometimes falls into when it doesn’t have many good ideas through which to force obstacles. These include Grace going on not one, but two suicidal efforts to address issues herself, first by mistaking a walker for the mark they’re seeking, and chasing it alone, for no other reason than to create a walker challenge for herself and Morgan later. Shortly before that as well, Grace tries to both turn on the mall generator, and reach the urgent care facility by herself. I get that Grace is used to acting like a lone wolf, but why exactly is she blowing off Morgan like this, especially when he’s already proven so devoted to watching her back?!

That said however, Grace and Morgan end up sharing a lot of great moments in this episode, confiding in each other about their pasts, their personal struggles, and why Grace never felt comfortable pursuing a romantic relationship during her former life. Grace even asks about Morgan’s dead wife and son, having learned about them from Morgan’s testimony on Al’s tapes, though Morgan is still cagey with these details, only opening up a little bit about his son later on. The two are forced to spend time together when they have to hole up in a store and wait for Dwight as well, who has the only means to rescue them from the walker horde that Grace helped provoke earlier. That’s well and good, since the store that Grace and Morgan hide out in is plenty fortified, but as you can imagine, Dwight runs into his own problems while he’s gone. 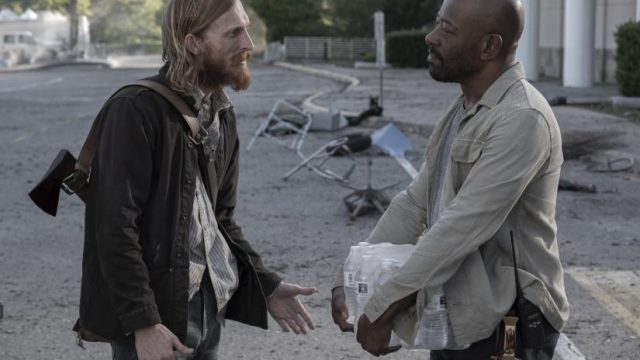 Sadly, Dwight also acts uncharacteristically stupid in his subplot, forcing an unlikely conflict with a lone member of Logan’s crew, after Dwight blabs his location on an open channel. Apparently, Dwight meant to provoke one of Logan’s crew into attacking him, or so he claims, barely escaping with his life, and managing to subdue the man in the process. This is basically meant to indicate that Dwight is making an effort to change, particularly after a previous conversation with Morgan wherein Dwight laments his former time with the Saviors once again. Still, Dwight needlessly risking himself like this, and in turn needlessly risking the well-being of Grace and Morgan, is incredibly idiotic. That’s before considering that Dwight’s decision to let Logan’s man go may also end up having dire consequences down the road too.

Still, all’s well that ends well, since Dwight does manage to make it back to Grace and Morgan, with Daniel and various other convoy members following soon afterward. After Daniel’s convoy helps pick up the supplies from the mall, and Morgan and Grace finally find the man they were looking for alive, helping to bury him and destroy his brain before he can turn, Grace also decides that she doesn’t want to diagnose herself, and would rather live for today. It’s romantic, if a little dangerous, considering that Grace could very well pass out again, potentially during a more time-sensitive and/or dangerous situation, but I guess we’ll have to see if that ends up happening. A little more immediately heartbreaking however is Morgan ultimately turning down the chance to ride to the next shelter with Grace, instead opting to provide backup for Al’s party, who are scouting different roads. It seems clear that Morgan still isn’t yet ready to pursue a new relationship, but Lennie James really did a great job of twisting that emotional knife in the closing seconds, as Morgan appears to tear up after making his difficult decision. 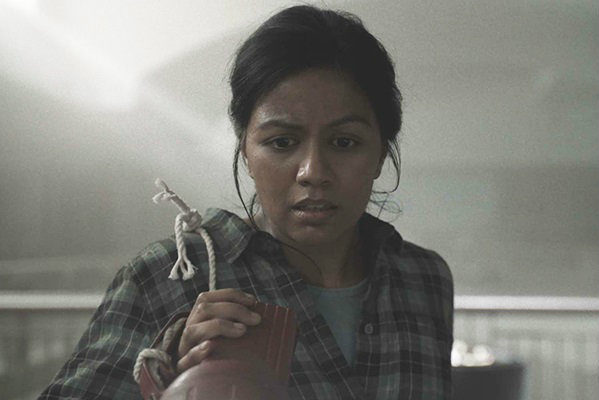 “210 Words Per Minute” could have tightened a bit of its storytelling, but even if it had to force a few brain farts on its characters, it still provided a standout focus on Morgan, Grace and Dwight alike. All three characters were given a great chance to show how much they’ve grown, and how eager they are to embrace a better tomorrow, even when it’s hard. Even with much of the main Fear the Walking Dead cast being absent in this episode, the tight character work focused in very well on its chosen handful of personalities, while also giving these characters another solid new setting to explore. The threat of Logan is still out there though, and even as Dwight is determined to set his own better example, it still seems evident that Morgan’s crew trying so hard to defy the rules of the apocalypse only seems to antagonize Logan’s group even further.