Swamp Thing has spent quite a lot of time on character backstory over the past couple of episodes, but fortunately, the series picked up some lost momentum in its fourth episode, after the third ended up getting a little over-burdened by its narrative. “Darkness on the Edge of Town” moves away from the show’s recent character work to introduce another comic book-approved threat to Marais, this time in the form of a deadly contamination that eventually infects its hosts with intense panic and hallucinations. While Abby and Liz struggle to deal with that threat, the Sunderland’s also prepare to celebrate the supposed eradication of the Green Flu, specifically with a big party at the town hall.

All the while, Abby remains committed to trying to find answers for Alec and his present condition. Abby talks Swamp Thing into presenting a tissue sample to that effect, with Dr. Woodrue noticing that Abby is somehow recording data for an organism with the traits of both a plant and an animal. This serves as a convenient excuse for Woodrue to start learning about Swamp Thing on his own, after Abby swears him to secrecy, in exchange for his research assistance. DC fans would obviously suspect that Woodrue is up to no good with this research, since they would know that he’s destined to become plant-themed DC villain, Floronic Man, but nonetheless, the research on Alec’s present state is one storytelling element that ends up being lost in this episode’s otherwise stronger narrative. That’s a let-down, especially considering the more extended interactions between Abby and Swamp Thing in this episode. 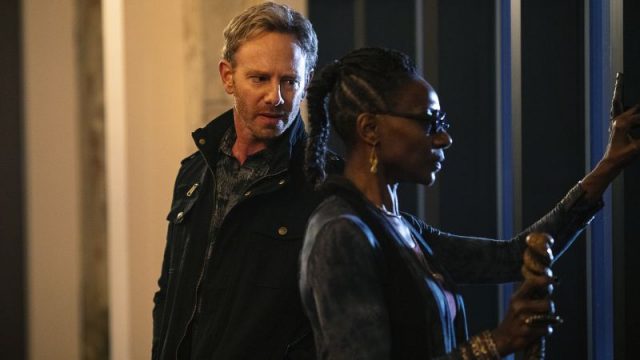 The new trouble to hit Marais ends up arriving via a young employee at Liz’s bar, who ends up being cut by the teeth of a corpse that’s accidentally dropped on him, after his fellow swamp pillager tries to cut down a tree. After the young man subsequently hallucinates a snake on his arm in the bar’s kitchen, he violently cuts up the arm with a knife, before sticking it in the sink disposal, and subsequently dying from his injuries soon afterward. Liz’s father, Delroy ends up being scratched during this scuffle as well, and goes on to hallucinate himself, resulting in Delroy firing a gun blindly around the bar, with Abby, Liz and Lucilia nearby, believing them to be robbers on the night that his mother was killed. The combined efforts of the three women allow Delroy to be subdued and taken to the hospital, but not before Delroy scratches Lucilia, naturally passing the infection on to her in the process.

The pretty on-the-nose direction makes it obvious as to how the fear-based infection spreads between characters, which is a little unnecessary, but regardless, this scary new threat to the town is a pretty good one! Things really amp up once Lucilia freaks out at the town hall party to boot, which involves her hallucinating that Matt has been fatally wounded by one of the attendees. Again, Abby manages to get Lucilia under control, but is infected herself in the process. Fortunately, this at least allows Abby to bring the infection back to the swamp, whereupon Swamp Thing safely disposes of it. The hallucination seen by Abby also appears to present an interesting tease for DC fans, since it seems apparent that Abby is hallucinating the Phantom Stranger, a DC character that’s dedicated to fighting the occult, and, like Swamp Thing, saw several of his original stories published under DC’s Vertigo imprint, before the Stranger was more directly folded into the mainline DC Universe. The question is though, if Abby is seeing the Phantom Stranger, then why would the Phantom Stranger be attacking a seemingly good-natured girl?

The other major story arc of this episode once again surrounds the Sunderland’s, and fortunately, their storytelling continues to excel. Maria seemingly cutting Avery off from his swamp experiment funding currently isn’t amounting to much, since Avery and Maria both appear unified and happy at both the hospital and at the town hall, but this may be because Avery smooths over the situation in the most underhanded way he knows how. After Susie Coyle is allowed to leave the hospital, only to be threatened with living with a deadbeat, likely abusive uncle, Avery makes arrangements to adopt Susie, particularly after he sees Maria being happy in Susie’s presence. This initially seems like a gesture of kindness, though Avery paying off the uncle at the end of the episode confirms that he has an ulterior motive, namely by buying his wife’s love and devotion again, by literally buying a child for her. It’s an exceptionally twisted, yet undeniably effective tactic by Avery, who is continuing to run circles around Swamp Thing’s other recurring antagonists at the current rate!

Finally, Daniel also makes a return in this episode, trying to talk to Abby about the connection that was teased by Madame Xanadu, before Daniel later tries to help Abby with Lucilia, while Lucilia is infected at the town hall. Daniel still isn’t fitting into the show that smoothly, and feels like a benchwarmer character for a show that already had its run tragically cut short by Warner Bros., but beyond that minor annoyance, “Darkness on the Edge of Town” nonetheless presented a tighter and more thrilling episode of Swamp Thing than what the show delivered previously. Abby’s ongoing research regarding how to help Alec disappointingly didn’t compare to the very scary and effective threat facing Marais here, but fortunately, the thrills in this episode were strong overall, to compensate. Likewise, the latest scheme by Avery ended up being fantastically sinister, possibly presenting serious implications for Maria and Susie alike. In the end though, Abby and Swamp Thing ended up saving Marais from yet another epidemic-to-be, but just as the plants have whispered to Alec, the swamp has plenty more dangers in store for the town.