Another bit of bread crumbs from Pennyworth’s pre-Batman origin story gets detailed in the show’s third episode, which puts the main draw right in the title. Now that we’ve caught a glimpse of the young and single Thomas Wayne, “Martha Kane” aptly introduces us to the future mother of Batman, who would one day go on to become Thomas’ wife, before the two are tragically gunned down during their son, Bruce’s childhood in Gotham City. At this point however, Martha is an American photojournalist who comes to London to hire Alfred, for yet another mysterious job, one that naturally has more unexpected complications for the Dark Knight’s future butler.

“Martha Kane” presents another very entertaining core storyline, detailing another especially cool and exciting job for Alfred, this time without Bazza and Dave Boy in tow. Instead, Bazza and Dave Boy occupy their own subplot, wherein Dave Boy’s PTSD and out-of-control drinking begin to become a problem during a card game. This subplot ends up fleshing out Alfred’s military pals rather nicely, presenting a good mix of dark humour and surprisingly potent drama, while moving the war scars away from Alfred for a change. Seeing Dave Boy provoke Bazza’s opponent in the card game, only to accidentally kill the man when he throws a loaded gun for him to catch, provides a surprisingly comical payoff, but one nonetheless drenched in real sorrow. Despite seeming like a loose cannon and a cowboy, Dave Boy clearly bears his own scars from his time in the SAS, which Bazza talks him through. It’s a really nice character moment, and it fits well with Pennyworth’s unique blend of suave sophistication and surprisingly brutal violence.

As for the main storyline with Alfred, this ends up being kicked off once Martha finds Alfred in the pub wherein he took his first job dealing with Jason Ripper. Martha has been hired by a mysterious and very rich party to get a homosexual computer genius out of prison, before he becomes castrated, and lost to her employers, and Alfred is the man that Martha wants running security for the rescue. Alfred takes the job, which seemingly goes well enough at first, even when Alfred sees the future of computers first-hand, and begins to become suspicious of Martha. Naturally, the Raven Society end up intervening in the extraction as well, forcing Alfred to quickly think on his feet, when it looks like Martha, her charge and her charge’s partner are all about to be killed by the surprise intruders.

You can probably see where this is all headed, but the execution is very cool, primarily due to Alfred’s incredible resourcefulness once again stealing the show. After talking the Raven Society agents into leaving, Alfred re-lights the disabled CIA runway using leaked fuel from a nearby truck, allowing the extraction plane to take the computer builder and his partner away to safety, while the Raven Society impotently fails to ambush them on the road. From there, Alfred subsequently confronts Martha about her true employer, which, as it turns out, is none other than the No Name League! Martha hasn’t yet met Thomas, despite Thomas’ own apparent work for the No Name League, but she nonetheless gives Alfred a very generous payout, while promising that she will be needing his services again soon. It’s interesting and ironic that Alfred kept turning down Thomas, only to end up affiliated with Martha and her own No Name League business, and this should hopefully also present a pretty entertaining payoff, once Martha and Thomas inevitably meet each other soon.

Alfred actually had to cover a lot of ground in this episode, even outside of the core storyline with Martha, sometimes to a fault. Before Alfred takes Martha’s job for example, he tries and fails to appeal to Esme’s rich, unsympathetic father, who refuses to give Alfred his blessing to marry his daughter. This eventually culminates in a big fight with Esme, whereupon Esme leaves Alfred afterward, before leaving her job as a dancer to boot, once her play gets a proper venue. This would seem to be nicely dramatic, but it does unfortunately end up being moot, since Alfred and Esme wind up getting back together and re-engaged mere moments later, complete with Alfred using his big payout from Martha to provide a nice apartment for the two of them. Again, the Alfred/Esme relationship is too much of a weak link on Pennyworth, and currently feels like it’s only there to stir up disposable drama. Alfred is best when he’s focused on his budding security business, and frankly, Esme’s character is doing little more than getting in the way of the show’s true draw at this point.

There are a couple of other storylines as well, one of which yet again involves Alfred, and the other of which gives us another entertaining sidestory with the Sykes sisters. Yes, for those keeping score, this is yet another Alfred conflict, in an episode that already feels like it has too many Alfred conflicts! This time, it’s Alfred’s family that becomes the source of drama. Arthur once again disputes Alfred’s love of Esme, along with Alfred’s life plan, and this eventually culminates in the implication that Arthur abuses Mary. This is rather clumsily revealed and comes right the hell out of nowhere though, so the revelation doesn’t really end up landing. Fortunately, Bet and Peggy at least balance this out with one of the better subplots of the episode, as they meet one of Peggy’s apparent ‘clients’ and his wife, forcing the two innocents to strip down to their underwear, and serve the two of them with whatever they need. Again, Pennyworth ingeniously leaves the details of this scenario to the imagination, which makes it feel both funny and scary. The same is true of Bet’s continued fixation on Esme, which she does declare to Peggy to be, at least in her mind, a genuine friendship and a missed connection. Peggy refuses to let Bet return to London, but something tells me that this won’t stick for very long, since Bet doesn’t strike me as the kind of person who takes a refusal lying down. 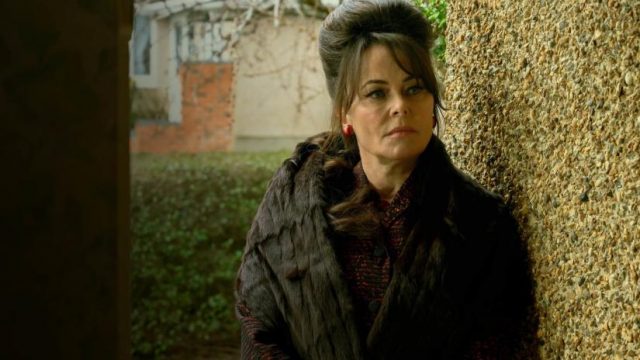 “Martha Kane” goes back to establishing yet more moving parts in Pennyworth’s ever-growing ensemble, even still finding chances to check in with Lord Harwood on top of all that, who has now been dumped in the countryside with his nose cut off by the end of the episode. Harwood is still excelling as an authority in the Raven Society, I see. Regardless, Alfred’s core storytelling remains standout here for the most part, despite Esme and the rest of the Pennyworth family largely failing to follow in the appeal of Alfred’s security job. That said, the Sykes sisters also once again steal the show, injecting whatever necessary comic book-style ingredients remain missing in an otherwise solid, if slightly busy Pennyworth episode. Fortunately, the introduction to future Batman mother, Martha Kane is also a winner, set amid yet another sticky job that the Raven Society almost makes very difficult, before Alfred once again comes out on top. Now that the future Wayne parents’ affiliation with the No Name League is laid bare, Alfred seems to have officially taken his side in the coming war for the British empire, even if he doesn’t know it yet. As a result, he’s bound to be making many more enemies in the Raven Society very soon!