It turns out that Al may have inspired Virginia more than she realized, after their brief meeting at Paradise Ridge. “Channel 5” thus begins with an inspired bit of subtle psychological warfare between the Pioneers and Morgan’s convoy, as Virginia releases her own documentary about the Pioneers’ plans for the future. Naturally, this angers Al, since it’s making a mockery of all the work she’s done signal boosting the mission of Morgan’s group, so Al decides to respond by filming the long journey to a more steady location for the convoy, now that they’re down to their last tanker of gas.

Once again, “Channel 5” adopts a mockumentary format for the most part, much like Fear the Walking Dead’s midseason premiere from several weeks previous. It again proves to be an effective storytelling device as well, with Al’s new documentary being extra honest, even in portraying the more difficult parts of the convoy’s latest journey. Now that Season Five is down to its last two episodes, Fear the Walking Dead is also finally unifying the formerly scattered convoy, now placing all of its protagonists in the same formation of vehicles, all of which are headed to some unspecified common destination. This means that we get some good character payoffs, as well as some interesting challenges, particularly when the journey to metaphorical greener pastures naturally doesn’t go as planned. 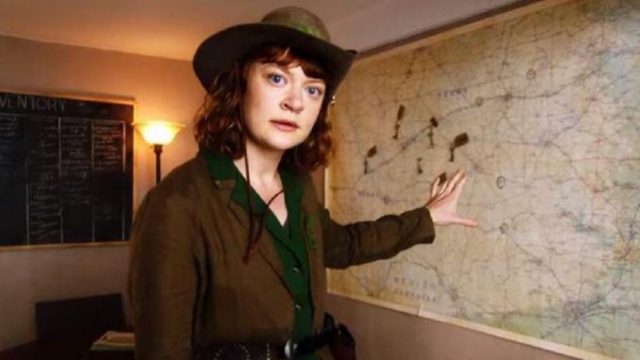 With Morgan’s party exiled from the oil fields, June decides to pick a direction and go, which eventually takes the convoy to a bridge. With the bridge failing however, the challenge to get across proves daunting, particularly since Grace’s condition has once again become bad, or so it seems. Despite June not really knowing what she’s dealing with regarding Grace’s condition, a quick bag of fluids seemingly gets Grace fully back on her feet, as if nothing was wrong. As has been a problem before though, this undermines the sense of urgency that the characters are otherwise feeling. Sure, other factors help to make up for this, but if Grace is going to suddenly act like nothing is wrong, then why have her get super sick all of a sudden anyway, especially when the season is almost over at this point?

Regardless, it turns out, in one of the episode’s better twists, that the woman rescued by Wes, Alicia and Strand at Mile Marker 65 is none other than Janis, Tom’s sister! This has Tom and Janis both resolving to help counter Virginia’s documentary with Al’s new footage, though after being cornered at the bridge, Virginia once again returns to make contact with Morgan’s group. After once again offering them the chance to join, to which every single survivor in Morgan’s group refuses, Virginia then responds by firing her guns in the air, which summons a herd of walkers! After subsequently being told to radio Virginia on Channel 5 if they’re ready to accept her help, Morgan’s group thus has to get across the failing bridge, while being overwhelmed by walkers, in what’s actually a pretty hair-raising sequence. This provides a much better ticking clock than Grace’s condition does, which at this stage just seems to be doing whatever the script demands.

Either way, the survivors eventually run to the other side of the bridge successfully, but are forced to abandon their supplies, including the lone remaining oil tanker, in the process. On top of that, Tom is killed while trying to capture footage for the documentary, though this was another element of the episode’s drama that sadly didn’t land. I get that Tom successfully fled from Virginia, as did his sister, but Tom has only been around for two episodes, and that’s not nearly long enough for his death to make much of an emotional impact. Not only that, but Tom standing in the middle of a collapsing bridge, seemingly for the sole purpose of dramatically sacrificing himself on tape, is both stupid and illogical. How exactly does Tom dying like a moron help Al’s message? He could have just as easily run to the other side of the bridge with everyone else, and captured the bridge breaking with the supplies on the other side, just the same!

Fortunately, a much better emotional gut punch was saved for the episode’s conclusion. After Janis doubles down on her commitment to Morgan’s group, in the wake of losing her brother, Morgan’s crew hoofs it to another branch of Humbug’s Gulch, which a walker happens to be brandishing a badge for not far away. When the group finally arrives though, after sharing some hopeful conversation about what they want to do with a more steady home, everyone is horrified to find the Humbug’s Gulch branch overrun by walkers. Left with no supplies, no transportation and no other options, everyone finally surrenders to the reality that the only way to survive is to summon Virginia. A disgusted Dwight seemingly walks away from the group in the process, no doubt to be an ace-in-the-hole for later, but the episode ending with Morgan swallowing his pride and radioing Virginia for assistance made for a dramatic and powerful way to lead into Fear the Walking Dead’s subsequent season finale, as everyone’s shared post-apocalyptic ideals seemingly fall apart around them.

Not every moment of drama managed to land, but, “Channel 5” still provided an inspired new spin on the mockumentary hook from Fear the Walking Dead’s previous midseason premiere, particularly when it tragically culminates with the season’s new antagonist seemingly winning her ideological battle with Morgan. Perhaps it was all too good to be true, but I guess faith isn’t truly faith if it’s not untested. Faith has been a central theme throughout much of this season as well, so it’s smart timing to put Morgan’s group in the throes of their darkest moment of despair, right as Season Five is going into its finale. Again, I hope that Virginia’s Pioneers stay active and continue to be an obstacle in next year’s sixth season of Fear the Walking Dead, because they’re some of the best antagonists that Fear the Walking Dead has delivered up to this point, but I doubt that I’ll have to worry about Virginia losing her dominance over Morgan anytime soon, especially when Morgan’s entire group abandoned all of their resources for want of chasing a dream that didn’t ultimately pan out.