Pennyworth certainly took a hard left turn into comic book territory during its previous episode, whereupon the show started suddenly dealing with occult themes and supernatural obstacles. Granted, mystical threats have menaced the future Batman and Gotham City on plenty of occasions throughout DC history, but in taking place before that point, Pennyworth had largely been operating in a fairly grounded style up until now, at least outside of its sweeping political conspiracies, and fantastical take on London. Now that the show has opened up the occult genie bottle though, “Julie Christie” is left to deal with the fallout of so many strange occurrences. Admittedly however, this episode does have better plotting than the shakier episode that Pennyworth previously delivered.

Granted, the best payoffs of this episode seem to happen in the final moments, but, “Julie Christie” at least offers two fairly engaging storylines that continue to hint at the season’s coming climax rather nicely. Alfred is of course continuing to chase after Esme’s killer, though at least now, he’s identified the man that he’s looking for. After finding an ominous letter on his front door, Alfred, Bazza and Dave Boy now seem to have confirmed beyond a shadow of a doubt that Captain Curzon was indeed responsible for Esme’s death. When they toss Curzon’s house however, they find no further clues, and the trail once again grows cold. This is the point where Alfred takes it upon himself to harass a local veterans’ shelter, demanding the whereabouts of Curzon.

Despite Alfred seemingly getting back on track in his professional life, it was nice to see that Pennyworth isn’t completely abandoning its former attempts to make Alfred darker and more ruthless in the wake of Esme’s death. An increasingly enraged and impatient Alfred quickly picks a fight with the sergeant guarding the door to the veterans’ club, for example, one that almost erupts into a full-scale melee when the soldiers refuse to give up Curzon! After another soldier reins him in however, Alfred is told to wait for potential tips at his favourite bar. He gets them as well, with Curzon’s whereabouts positively identified at an apartment, whereupon Alfred calls off Bazza and Dave Boy, and says that this will be a one-man job. As much as Alfred talks about bringing Curzon to justice, it does seem pretty clear that he has other plans at this point, so perhaps he’s leaving Bazza and Dave Boy out of things so as not to implicate them if things go sideways.

Speaking of implicating criminals, when Alfred does try to corner Curzon, he runs into none other than Bet Sykes, in one of the episode’s best surprises! This was foreshadowed a bit, mind you, namely when Harwood and Peggy go to Dr. Gaunt’s office to reveal that Harwood is still alive, but that only the top Raven Society brass can currently know. After Bet subsequently learns that Alfred has identified Esme’s killer, Bet sneaks off to go attack Curzon with Alfred, though their shocked conversation naturally awakens Curzon, and soon after causes him to flee. Alfred gives chase, but loses Curzon after being blocked by a bus, at which point Bet returns, and suggests that the two have a common enemy. The prospect of Alfred teaming up with Bet, and possibly Peggy as well, is pretty promising, not to mention well overdue! As much as I’ve enjoyed the many asides with the Sykes sisters, it’s about time that they properly got back into Pennyworth’s main story threads, especially when they’re two of the best characters in Pennyworth’s current ensemble. 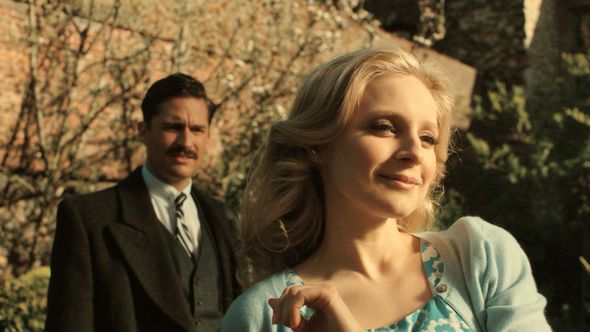 As for the Thomas storyline in this episode, it once again brings him into Martha’s orbit to good effect, following a naked, confused and humiliated Martha stumbling through the streets of London, and eventually making her way back to her apartment, where Thomas is waiting. After Thomas informs Martha that three days have passed, the two go to the Crowley mansion, where they learn that Patricia is happily staying with Aleister Crowley. After trying to persuade both Crowley and Patricia, Thomas eventually gives up on reclaiming his sister too, leaving Patricia in Crowley’s care, despite Martha’s protests. Patricia is still a bit of a weird plot device through which to link Crowley to Thomas and Martha, but regardless, Martha soon after has nightmares about her lost memories from the Crowley party. This has her imploring Thomas even more to take his sister back, which has Thomas ready to offer a bribe.

Since Crowley is already very rich however (naturally), he instead asks for Thomas’ soul, which would then be offered up to Satan. Naturally, Thomas doesn’t believe that The Devil is real, but Crowley eventually talks him into an, “Audience”, whereupon Thomas is shown video of his sister being sexually violated in a Satanic ceremony. This results in a furious Thomas nearly choking Crowley’s man-servant to death, before he realizes what he’s doing, at which point he takes both Martha and Patricia out with him. This whole demonic element with Aleister Crowley could be interesting, and like I said, it’s not like Batman Family characters haven’t dealt with mystical threats in other DC media, not to mention that plenty of magical obstacles existed on Gotham, which ostensibly shares a universe with Pennyworth, so why not have occult threats in Pennyworth? The thing is however that the Satanic material, at least at this point, is pretty hokey and ridiculous, and still isn’t fitting in well with the rest of the show’s storytelling. Frankly, I think that this kind of occult storytelling probably should have been saved for a potential second season, since it feels too early to be bringing it in at this point.

This episode does end with an especially promising tease though, suggesting that Dr. Gaunt is going to usurp control of the Raven Society away from Lord Harwood, despite Harwood’s return. Worse still is that Alfred’s own father is apparently one of the Raven Society’s loyalists! Considering that Alfred has been so heavily affiliated with the No Name League lately, throwing Arthur in with the Raven Society is actually a really smart and dramatic move, and one that should provide another great emotional challenge for Alfred when he inevitably discovers the horrible truth! In any case, “Julie Christie” helped Pennyworth rebound a bit after a weaker episode to come before, even if the occult storytelling is still being shoehorned into the show’s narrative pretty awkwardly. Like I said though, the rest of the show’s plotting is considerably improved here, particularly with the prospect of the Sykes sisters once again returning to active work at last. Captain Curzon may be in the wind for now, but Alfred certainly isn’t one to give up the hunt either, even as the shaky truce between the Raven Society and the No Name League is predictably starting to come undone.

Pennyworth 1.7: "Julie Christie" Review
Pennyworth exceptionally rebounds with tighter plotting and more engagement in, "Julie Christie", as Alfred learns who killed Esme, and Thomas gets in touch with his dark side.
THE GOOD STUFF
THE NOT-SO-GOOD STUFF
2019-10-26
86%Overall Score
Reader Rating: (0 Votes)
0%