Despite the zombie fad losing a significant amount of steam in recent years, demand for at least one beloved zombie movie sequel never ceased, that being Sony Pictures’ cult favourite Zombieland. A sequel to Zombieland has been in development since shortly after the original movie released in 2009 as well, with various creative and professional factors getting in the way for writers, Rhett Reese and Paul Wernick, and director, Ruben Fleischer, which repeatedly stalled the planned follow-up. Reese and Wernick were especially distracted from Zombieland after being hired by 20th Century Fox to pen the script for their highly successful duo of Deadpool movies, while Fleischer kept busy with mostly disposable popcorn flicks like Gangster Squad and 30 Minutes or Less, though he did also manage to direct the very commercially successful Venom movie that Sony produced last year. It took a whole decade (and a failed Amazon Video spin-off series), for Reese, Wernick and Fleischer to finally return to the world of Zombieland successfully, alongside the original movie’s four lead actors, but finally, the stars have aligned again for one of Sony’s most frustratingly neglected would-be franchises. 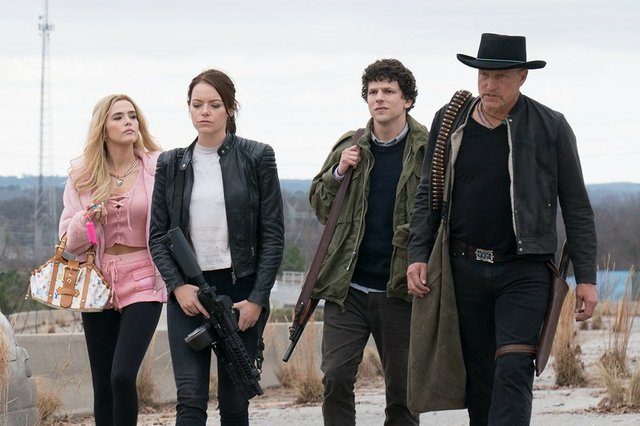 Reese, Wernick and Fleischer all return to their former roles as writers and director, respectively for Zombieland: Double Tap, the long-awaited Zombieland sequel, which picks up in real-time, a whole decade after the events of the original movie. With the first movie’s lovable quartet of survivors now older, more hardened, and having many more off-screen adventures since the zombie apocalypse of the late 2000’s, Zombieland: Double Tap finally challenges the protagonists with something new; The apparent inevitably of their splitting up. This of course doesn’t ultimately stick though, and does sometimes create a sequel that ultimately re-treads dysfunctional family themes that the first Zombieland movie already did, and did in a better, more novel way. All in all though, Zombieland: Double Tap still manages to capture most of the zany fun and comically over-the-top action that made the original such a surprise hit, while still packing a solid amount of enjoyable surprises that help this follow-up carve out its own niche of memorable silliness.

True to form for a Zombieland movie, we still don’t get too much advanced development for our returning heroes: Jesse Eisenberg’s neurotic Columbus, Woody Harrelson’s unhinged Tallahassee, Emma Stone’s cynical Wichita, and Abigail Breslin’s sassy Little Rock. For ten years, these characters have existed off-screen as a resourceful, zombie-killing family in the apocalypse, but Zombieland: Double Tap sees that family foundation threatened, after Columbus decides to propose to his girlfriend, Wichita. At the same time, Little Rock also runs off with a new age hipster-type survivor, Berkeley, creating another inciting incident for more crazy adventures, after an enraged Tallahassee decides that Berkeley is no good for his surrogate daughter.

To an extent, this somewhat means resetting circumstances so that they mirror how the original Zombieland began, namely with Columbus and Tallahassee being forced into a bickering, unlikely team-up, while chasing Wichita and Little Rock, whom they eventually form a greater alliance with. That said however, there is an all-new character thrown into the ensemble that helps to avoid the feeling of this sequel re-treading the original, and just mixing up the set pieces. That all-new character is Zoey Deutch’s incredibly hilarious Madison, a dumb blonde stereotype that becomes Columbus’ new squeeze after Wichita initially leaves him, as well as the character who often supplies the best jokes in the movie. Deutch fits right in with Zombieland’s ragtag ensemble of devil-may-care survivors, creating an effective satire of that one horror movie bimbo that no one seems to like, and who should be beyond useless in a zombie apocalypse scenario, and yet, she somehow keeps surviving through sheer dumb luck, much to everyone’s annoyance, save for possibly Columbus, and that’s only because he’s banging her.

Much of the intentionally limited character work relies on surprises beyond the inciting incident to get the most out of it, but I will say that Zombieland: Double Tap expanding the cast actually proves to be a good decision, especially since the movie picks its additions carefully, and doesn’t overdo them. Rosario Dawson is another fun highlight as a no-nonsense survivor that ends up developing a surprising connection with Tallahassee, for example, while Luke Wilson and Thomas Middleditch play two other survivors that punctuate a pretty good extended joke about how much the alliance between Columbus and Tallahassee really shouldn’t work. It’s a shame that Little Rock spends so much time separated from the other characters in this case, but this also allows this sequel to keep expanding its world with fun and unexpected new set pieces, most of which manage to provide more solid humour and action.

Zombieland: Double Tap maintains the straightforward story formula of the original, delivering a fun, digestible take on zombie apocalypse media, without really overthinking it too much. That proved to be a big strength with how the original Zombieland movie was presented, and this direction does seem to benefit the storytelling in the sequel as well. Like I said, the outset of the lead character arcs does involve a bit of a reset that takes the stakes back to where they were when the first movie started, at least to some degree, but once Madison joins the ensemble especially, Zombieland: Double Tap does manage to start feeling a little more distinct, even if it’s still ultimately spinning the same themes of friends-and-family values that already founded the original Zombieland’s narrative. 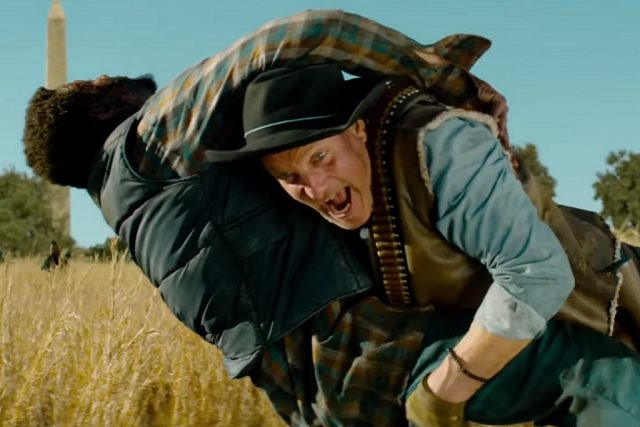 Still, maybe that’s fitting. After all, the Zombieland movies are tongue-in-cheek romps that know what they are, and don’t apologize for it. In fact, it’s kind of amazing that the storytelling in Zombieland: Double Tap excels so much by not trying that hard to stand out from what one would expect in a light-hearted zombie apocalypse movie. Since zombie media has become so overexposed over the past several years especially, and has started to really strain itself in order to try and maintain fresh and interesting narratives by this point, Zombieland: Double Tap actually thrives by keeping things simple and silly, yet still having that same sense of lovable heart that the original Zombieland had in spades. As such, Zombieland: Double Tap certainly isn’t the most novel sequel ever made, but it gives audiences more of the kind of storytelling that they already loved in the first movie, with some new characters, and some new settings, all of which fit in well with the world of Zombieland. Maybe this simple plotting formula would have disappointed people if Zombieland: Double Tap had hit theatres shortly after the original did, but since we’ve had to wait an agonizing ten years for this story to continue, the recipe feels right for a sequel that doesn’t think too hard, and just gives audiences more of what they already loved in the previous movie.

Director, Ruben Fleischer may have delivered a huge surprise hit with the original Zombieland in 2009, but it seems like he’s struggled to recapture that same lightning in a bottle since then. The closest that Fleischer has come to a truly successful directing effort since Zombieland in fact is last year’s Venom, which proved to be a massive moneymaker for Sony, earning a staggering $855 million at the worldwide box office, which in turn made it Sony’s highest-grossing movie of last year, and the seventh-highest-grossing movie of last year overall. Despite Venom’s massive commercial success however, it was still largely detested by critics and Marvel fans alike, and drew mixed opinions from average moviegoers, meaning that it still didn’t really give Fleischer the next directing hit he’s clearly been working so hard for. That career frustration that Fleischer is no doubt feeling is all over Zombieland: Double Tap as well, which is filled with over-the-top relish throughout Fleischer’s direction, sometimes to a fault. 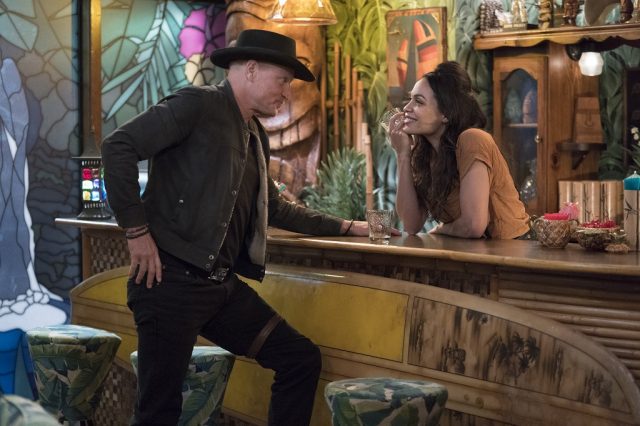 Fleischer is clearly relieved and excited to be able to return to the cinematic world that first put him on the directing map, and that enthusiasm is certainly a part of why Zombieland: Double Tap ends up being just as fun to watch as its predecessor is. That said however, the kooky directing flourishes that often defined the original Zombieland, such as the highlighting of Columbus’ post-apocalyptic ‘rules’, along with jokes like ‘zombie kill of the week’, and other highlight bits like that, are sometimes littered throughout Zombieland: Double Tap to the point of being obnoxious. Again, I think this is down to Fleischer’s sheer elation at finally being able to make a Zombieland sequel after all these years. Still, the novelty and humour behind these flourishes really loses something when they’re peppered throughout this sequel in droves, rather than being inserted as amusing surprises that play with the tongue-in-cheek writing and direction.

Still, as much as Fleischer strains a few sight gags and callbacks, in turn preventing Zombieland: Double Tap from maintaining the same degree of novelty as the original, he still directs a funny and action-packed follow-up that fits right in with the sensibilities of its predecessor, even ten years later. As I said, Fleischer sticking close to the classic Zombieland playbook ends up being the right call after so much real-world time has passed. Not only that, but with both the director and actors clearly having a great time filming this sequel, it’s very easy for the audience to get sucked into that infectious charm. The writing behind this follow-up is a little more clever than the direction, admittedly, but it still feels like the ten-year gap hasn’t dragged this second movie down at all, especially with Zombieland: Double Tap sometimes feeling even more engaged and energetic in its execution than even its 2009 predecessor did.

After ten years of waiting for a Zombieland sequel, it would have really added insult to injury if said sequel was a dud. Fortunately though, that’s definitely not the case. While it’s not quite the ingeniously novel spectacle that the original Zombieland was when it debuted ten years ago, Zombieland: Double Tap still manages to be a very good sequel, maintaining much of the same charm, energy and humour that made the first movie such a big surprise gem. There are some repeated directing flourishes, and more storytelling winks and callbacks than necessary, but Zombieland: Double Tap once again understands that less is more with this kind of movie. There’s not much substance to read into in this follow-up, but that does keep it true to the simple, yet amusingly violent and wacky appeal of the first movie.

Zombieland: Double Tap is clearly a sequel designed for people who already love the original Zombieland, but if that’s you, and you’ve been dying as much as any other Zombieland fan for a return to this lovably insane post-apocalyptic universe, then this highly overdue sequel proves to be very much worth the wait. Even in an entertainment industry that’s packed to the gills with oversaturated zombie media by this point (something that even this movie takes time to affectionately mock), the sheer charm of Zombieland still hasn’t lost its eccentric magic, to the point where it feels like this long-dormant series hasn’t aged a day. There may not be much on offer for those who either ignored or didn’t care for the first Zombieland movie, but that’s fine. Like I said, Zombieland: Double Tap knows what it is, knows who it’s for, and doesn’t apologize for it. Why should it too, least of all when the Zombieland brand clearly hasn’t lost a step at all, even after its sequel’s long stint in development hell?