Batwoman is still struggling with its writing in its fourth episode, but fortunately, the storytelling did at least see a small uptick here. “Who Are You?” is still hardly worthy of the Arrowverse’s gold standard, but it does at least manage to overcome its dull villain-of-the-week with a fairly solid core Kate storyline, as she experiences some growing pains after coming out with her Batwoman identity. At the same time, another fairly interesting arc takes place with Catherine, after Alice begins tormenting her, in the wake of Catherine’s dirty dealings threatening to be exposed.

We get another C-list Batman baddie to serve as our disposable threat to Batwoman here, and that comes in the form of Margot Pyle, a.k.a. Magpie. Magpie is a thief with a particular fixation on shiny things, and while she’s had a few decent turns in DC Comics lore, it’s also tough to argue that the character is often just the poor man’s Catwoman, something that The CW naturally has to make do with, since Catwoman is no doubt off-limits to the network. Magpie thus runs around Gotham City stealing precious jewels, and eventually swipes the late Martha Kane’s necklace out of Wayne Tower. Because apparently Bruce Wayne’s building, where his Batcave is in the Arrowverse, by the way, doesn’t have any reliable defenses to repel break-ins.

Still, we do need to get the storyline going, and while Magpie herself is a bore here, she does at least kick off a decent two-pronged conflict for Kate. Now that Kate has come out as Batwoman, she not only has more public scrutiny placed upon her, courtesy mostly of the off-screen Vesper Fairchild, but also finds that her Batarangs don’t work properly, leading to an embarrassing snafu, after Kate fails to stop Magpie from robbing a museum. Apparently, since the Batarangs are built for Batman, Luke needs to redesign them, which does eventually lead to them working. At the same time, Kate also struggles to maintain her romance with Reagan, because she has a hard time lying about her double life. This is well and good, but honestly, amusing rookie mistakes with Batwoman, such as Kate sneezing to set off a temperature bomb, prove to be more interesting and creative to watch than Kate’s annoyingly cliched, CW-approved relationship struggles.

Granted, the struggles with the double life are a pretty common superhero trope in general, but Batwoman pulls this idea off at least decently here, even with a mixed love story. I do think that the episode’s dialogue is still way too juvenile to make the inevitable implosion of Kate’s romance with Reagan land at the end of the episode (Kate spouting inspirational quotes from Rihanna in her latest letter to Bruce is especially cringeworthy), but Kate having to struggle with secrecy because she’s so used to being out and proud all the time is actually a good way to re-examine this very frequent internal superhero conflict. It also provides a way for Kate to eventually find her footing again as Batwoman, after Magpie sends some exploding pearls around a party as a distraction, and Kate manages to at least slightly improve her PR when she prevents people from getting hurt. Again though, this would have worked better if Kate didn’t just stop Magpie by dragging her into a pool with a quick shot of her grapple gun. Seriously, Magpie is supposed to be a master thief, yet she doesn’t have a way to get around a Bat Family grapple gun? 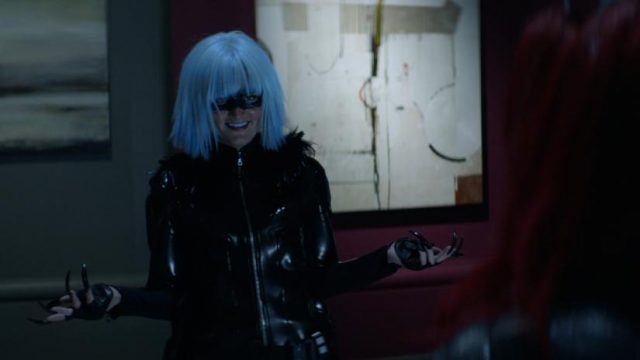 Outside of the core Kate storyline, the Catherine subplot also worked pretty well. Hell, speaking of the Hamilton family, even Mary managed to be surprisingly useful this week, even if she was also saddled with embarrassingly juvenile lines in this episode. Mary nonetheless uses some surprising ingenuity during a morphine drip however, following Kate depositing a septic Dodgson at Mary’s clinic (finally better justifying why a character can’t just go to a real hospital), to get a clue about Alice’s plan, which apparently involves someone named Mouse. There is a Mouse in DC Comics lore, namely a protegee of Catwoman, but it’s not yet known if this is the same character. Regardless, it was nice to see Mary be less than useless for a change, since Mary’s character seems to be the one that Batwoman is currently struggling with the most, being unable to commit to making Mary a vapid airhead or a smart social justice warrior.

Back to Catherine however, there was also a decent subplot dedicated to her, after Alice catches her trying to dig up the remains that are buried beneath Beth Kane’s grave. After Catherine tries to get one over on Alice by finding her lair soon afterward, Alice merely sends back one of her goons with a chopped-off finger (which is probably the most violent that Batwoman has gotten so far!), before taunting Catherine some more. This big loss eventually motivates Catherine to confess to Jacob that she faked Beth’s death, so that an increasingly distraught Jacob and Kate could eventually move on. This may help to explain how Catherine ever got in league with Alice, but better still is that it delivers a great dramatic conflict for both Catherine and Jacob, particularly as Jacob is once again forced to confront his world coming apart.

Like I said, Batwoman still feels like the current weak link in The CW’s Arrowverse shows, but at least it’s starting to show some small signs of improvement within its fourth episode. “Who Are You?” still struggles with a boring, unimpressive villain-of-the-week though. Not only that, but this episode’s dialogue sounding like it was frequently written by a fourteen-year-old definitely didn’t help matters. I get that Batwoman wants to be accessible to teenagers as well as adults, but it’s also once again adopting the Supergirl problem here, where grown twenty-to-thirtysomething characters are talking to each other like they’re somehow still in high school. This also somewhat hurts an otherwise decent double life struggle for Kate to boot, especially when the heinously melodramatic Kate/Sophie relationship once again briefly comes to the forefront here. Still, I’ll take whatever small victories I can get with Batwoman at this rate, and I can at least safely say that the show is getting a little better here. Let’s see if it can keep it up.

Batwoman 1.4: "Who Are You?" Review
Batwoman sees some small improvements in, "Who Are You?", as Kate starts struggling with leading a double life, and Catherine is forced to come clean about her cover-up with Alice.
THE GOOD STUFF
THE NOT-SO-GOOD STUFF
2019-11-09
72%Overall Score
Reader Rating: (0 Votes)
0%