The Whisperers’ psychological warfare appeared to reach an interesting new level at the halfway point of The Walking Dead’s front half this season, “Silence the Whisperers”, which has Alexandria in particular beginning to crack under the supposed proximity of Alpha. This leads to a surprising confrontation and shocking turn in the town, while Hilltop sees its own issues. After a tree seemingly crashes through one of the walls of Hilltop, leaving it highly vulnerable to walkers, tensions mount there as well, even as Lydia proves to be ground zero for growing discontent among the survivors at Alexandria.

Considering such an otherwise intense series of events, it’s a little disappointing that this particular offering from The Walking Dead doesn’t always feel like it’s paced particularly well, and can sometimes range in engagement as the survivors try and sort out what’s going on. I get the desire to create dread by moving from quiet scenes to panicked scenes, but this doesn’t always happen all that smoothly. Between Alexandria and Hilltop, it’s probably Hilltop that gets the better storyline here, even though Alexandria seems to be shouldering the bulk of narrative progression. At the same time, another subplot is squeezed in between Michonne and Ezekiel, after Ezekiel appears to almost attempt suicide, only being pulled back from the brink by Michonne. 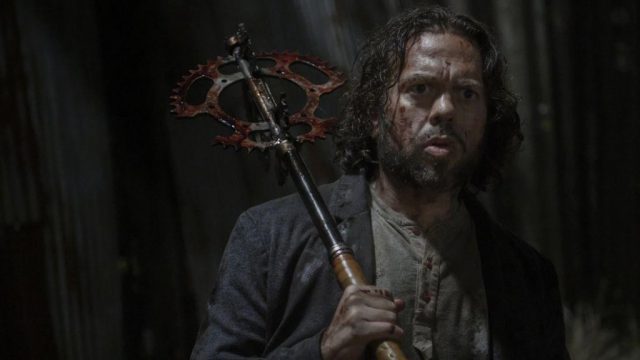 Ezekiel’s losses finally adding up for him led to a really great moment in this episode, which is why it’s a shame that it feels so quickly glossed over by the mounting tensions in the communities. Michonne being the one to pull Ezekiel back to his senses, recounting her own losses and difficulties without Rick, worked exceptionally well, as did a rather comically uncomfortable kiss between the two that Ezekiel initiates, before quickly changing his mind. This was actually a bit of an amusing callback to the original Walking Dead comic books, where Michonne and Ezekiel are indeed a couple at one point, which is made all the better when Ezekiel comments that the two could never be together in this universe, but maybe they could be in another one. It’s kind of a cool thought to imagine The Walking Dead having its own little ‘Multiverse’ in a weird way, where the comics and TV series operate in their own parallel universes, but regardless, I’m happy to see that Michonne was able to do more than take out walkers in this episode.

Speaking of taking out walkers, it really seems like Judith is starting to come into her own as a young survivor here! After Magna’s group fails to contain the walkers pouring into Hilltop from the breach, Judith teams up with Michonne to start slicing them up, which was a great way to follow up Judith suggesting a legitimate psychological tactic to Michonne, namely that Alpha is intentionally throwing walkers and disasters at the survivors to exhaust them, and thus make them more vulnerable and easy to manage. It’s really awesome to see Judith slowly becoming the best of both Rick and Michonne, especially since Danai Gurira is also going to be leaving the show this season, presumably leading to Michonne entrusting Judith to someone else’s care. The only gripe with this otherwise solid Hilltop storyline is the fact that Hilltop’s citizens ultimately deal with the walker breach off-screen, somehow suffering no fatalities in the process. That feels pretty damn unlikely, to say the least, almost rivaling that infamously unbelievable walker cleanup job at Alexandria from Season Six!

Like I said though, if there was any significant disturbance to the storytelling momentum, it often occurred at Alexandria, which delivered paranoia at the hands of the Whisperers to pretty mixed effect. This begins with several Alexandrians beginning to bully Lydia, leading to Lydia spending more time with Negan, whom she feels is the only one in town that, “Gets her.” This is a really interesting scenario, and eventually leads to a vicious attack on Lydia at nighttime, which culminates with Negan coming to save her, and accidentally killing Margot (one of the Highwaymen that only seem to exist as plot devices on this show), in the process. This is pretty contrived though, since it’s impossible to believe that no one in Alexandria witnessed this attack, nor how the attackers planned to get away with it, considering how much security is in the town. Not only that, but Negan accidentally pushing Margot so hard that she cracks her skull open on a wall and dies is cool in theory, but ludicrous in execution. What, did Negan suddenly develop super-strength? How the hell did he manage an accidental killing like that?! Actually, how did Negan escape his cell in the first place, on that note?!

Regardless, Negan having claimed the life of an Alexandrian citizen, even unintentionally, naturally stirs up a ton of added unrest at Alexandria, leading to a convening of the council, to try and decide whether Negan should be executed for his crime. After Lydia pleads Negan’s case, Daryl is doubtful that Negan should be punished, despite Daryl’s open hatred of Negan, and Michonne entrusts Daryl with her vote, since she’s currently stuck at Hilltop. This ends up being moot in the end though, since Gabriel postpones the verdict, only for Negan to be found missing the following morning. Despite Lydia claiming that she let Negan out, it’s clear that someone else was behind this, and that does at least set up a promising mystery for the next episode. The idea of Lydia being bullied by the paranoid Alexandrians, and Negan accidentally getting into trouble saving her, is not bad on paper in any case, but it’s annoying that the episode had to force a lot of the execution behind this storyline, leading to it feeling sloppy and unrealistic, rather than gripping and emotional.

Overall, “Silence the Whisperers” is a decent episode of The Walking Dead, but it could have been better in several respects. The mixed storytelling at Alexandria is the clear weak link here, even if good moments with Ezekiel, Michonne and several characters at Hilltop helped to make up for this. It’s nicely left up to the imagination whether or not the Whisperers are indeed behind the recent string of bad luck at the communities at this point as well, and one has to wonder if that bad luck streak will continue, after Oceanside calls Michonne for assistance, leading to her traveling there with Judith. I wish that the walker attack at Hilltop wasn’t completely resolved off-screen, or that Lydia’s bullying troubles didn’t feel so ridiculously unrealistic, but at least this episode managed to keep events moving forward at a fairly decent clip, even if it’s easier to care about some story turns more than others.