It’s bittersweet to think about Silicon Valley, one of the best and most entertaining sitcoms delivered by HBO in recent years, finally coming to an end in 2019. This was likely inevitable, considering that several of its lead stars have become busy with other projects lately, plus it does seem like the series is reaching a natural endpoint in its narrative anyhow. Pied Piper is now a massive enterprise, Hooli and Gavin Belson are essentially neutralized as threats, and Richard’s new internet dream is more or less starting to become a reality. “Artificial Lack of Intelligence” thus picks up with the show’s protagonists being in the most powerful and triumphant position that they’ve ever been in, and sure enough, it’s the perfect opener for what’s sure to be a very entertaining final season for Silicon Valley!

After an initially embarrassing, but ultimately resonant hearing about data sharing before Congress, a victorious Richard returns to Pied Piper, where he’s showered in adoration and adulation by his colleagues. Of course, this wouldn’t be Silicon Valley if we didn’t have some unexpected consequence to come with this win though, and that consequence comes from Colin, fittingly the ace-in-the-hole that ended up bailing the characters out of their big jam at the end of last season. It turns out that Colin has been secretly listening in on users’ conversations in his MMORPG, Gates of Galloo, perpetually leaving their headset mics on, and thus illegally storing voice data. Granted, the data use is pretty benign, since Colin doesn’t run ads, and is merely using the ill-gotten intel to improve the quality and stability of his online game. Even then though, this doesn’t sit well with Richard, who sees fit to try and force Colin out of the company right away, despite Pied Piper not being able to exist without him.

Inevitably, Dinesh, Gilfoyle and Monica are all opposed to getting rid of Colin, but Jared is all too happy to help Richard out. Jared’s been feeling neglected lately, on account of Richard’s immense success, and naturally sees this issue with Colin as an opportunity to get close to Richard again. The two then end up building their own data tracker after conspiring together, which gathers intel from Colin confirming that he embezzles, does drugs, sleeps with the spouses of his investors, and more! When Richard and Jared confront Colin with their own data collection as well, this appears to get Colin to terminate his data collection scheme too!… Until they later overhear Colin proudly presenting the data collection to his investors, wherein he declares that Richard has come up with the ultimate data collection algorithm, and they’ll all be rich! This was a hilarious and brilliant turn, especially since it was a weird sort of karma for Richard, whose control issues, neuroses and narcissistic streak have grown alongside Pied Piper throughout Silicon Valley’s six seasons.

Speaking of hilarious and brilliant turns, we get some great subplots with other characters in this final season premiere too. Gavin, of course, is continuing to try and manage the impending merger between Hooli and Amazon, only to become enraged when he learns that Amazon wants to completely scrub the Hooli name from their branding, despite Gavin keeping his salary, influence and perks after the merger. Gavin’s own pride leads to him rejecting the Amazon deal, which goes through anyway, and leaves Hooli’s assets in Amazon’s hands, while Gavin gets to keep the name, and a handful of divisions that Amazon didn’t want. This amusingly mirrors a real-world event, namely the Disney-Fox merger, which went through in the end, and only left the FOX network to keep its old identity. Granted, that was an FCC stipulation, not an intentional pass by Disney, but even so, Gavin having to watch his shrunken Hooli building having to be subletted from El Pollo Loco was also nicely just desserts for him, while still allowing Gavin to keep some sort of influence on this series, even as it heads into its final batch of episodes. 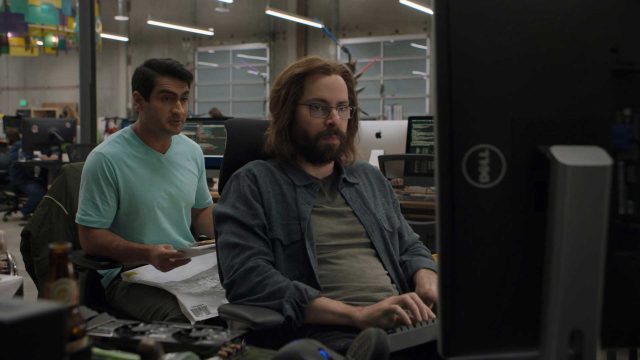 Dinesh and Gilfoyle also headlined a very funny subplot in this final season premiere, wherein Gilfoyle runs an experiment to see whether he can fool Dinesh with an A.I. of himself. Naturally, Gilfoyle is successful, and Dinesh eventually realizes that he’s been instant messaging an A.I. Gilfoyle, leading to Dinesh begging Gilfoyle to craft his own A.I. Dinesh, so he can avoid dealing with an annoying and inept Pied Piper employee. Gilfoyle acquiesces, and Dinesh, being Dinesh, lets the A.I. into his contact list so it can interact with his family members. This comes with the unforeseen consequence of the A.I. Dinesh contacting the A.I. Gilfoyle, which results in seven million E-mails’ worth of racist rhetoric and insults on the servers, eventually leading to the two being pulled into HR, and having to delete the A.I.’s. This subplot isn’t really relevant to the show’s ongoing narrative, but it’s incredibly funny nonetheless, and helps round off this episode very nicely.

The only small gripe with this otherwise very strong final season premiere for Silicon Valley is its final moments, wherein Jared absent-mindedly drives to the old incubator that Pied Piper started in, wherein he re-encounters Big Head and Jian-Yang. It’s here that Jared begins to question his place at Pied Piper, and subsequently decides to mentor a difficult incubee named Gwart. This could certainly be an interesting shakeup to the leads’ status quo, especially considering that Silicon Valley is now in its ending stretch, but this turn nonetheless feels very sudden. Jared has spent so much time being a fiercely loyal underling to Richard that a brief phone call from his therapist doesn’t feel like a realistic means through which Jared would sever ties with Pied Piper. Despite that small narrative hiccup though, “Artificial Lack of Intelligence” nonetheless kicks off Silicon Valley’s sixth and final season on a fantastic note. There was a strong core plot with some great implications for Pied Piper’s new corporate direction, which was also balanced by two richly funny subplots. As sad as I am that Silicon Valley is now in its last season, it’s also true that the show clearly won’t be overstaying its welcome. That’s fine by me, since it seems like the series’ last hurrah is so far poised to go out on a high note!

Silicon Valley 6.1: "Artificial Lack of Intelligence" Review
Silicon Valley kicks off its sixth and final season on an excellent note with, "Artificial Lack of Intelligence", which provides some clever karma for Richard and Gavin, while Dinesh and Gilfoyle get up to more hysterical shenanigans.
THE GOOD STUFF
THE NOT-SO-GOOD STUFF
2019-11-16
93%Overall Score
Reader Rating: (0 Votes)
0%