Despite a somewhat uneven pilot episode to come previously, Watchmen nicely pulled the rug out from under viewers at the conclusion of that first episode, when Don Johnson’s benevolent Tulsa police chief, Judd Crawford was found dead and hanged from a tree, seemingly by a wheelchair-bound elderly man. “Martial Feats of Comanche Horsemanship”, the series’ sophomore episode, naturally picks up in the fallout from these events, with Angela arresting the old man, and interrogating him as to whether or not the Seventh Kavalry was involved in Judd’s death. As it turns out though, a big conspiracy may be afoot, one that goes far deeper than some strangely overpowered racists.

After some of the flaws that Watchmen’s pilot episode sometimes suffered from, the second episode is definitely a marked improvement, especially now that the show’s need to establish its highly intricate, politically rich world is now out of the way. Thus, this episode can go all in on developing its threats and mysteries, beginning with the debut of an especially promising turn of events with Angela and the mysterious old man, whose name is apparently, “Will.” Will was already seen as a young boy during the 1920’s-era massacre on an African-American neighbourhood, the foundation for the, “Redfordations” that was revealed in the opening of Watchmen’s pilot episode, where he was left by his guardians, with a sign that says, “Watch Out For This Boy.” Clearly, someone of great means and ability ended up finding Will, as we come to discover throughout the episode.

This second episode of Watchmen also continues doing an excellent job of spotlighting the family dynamics of both Angela and the late Judd Crawford, including giving us our first terrifying glimpse at the events of the White Night! It turns out that this event occurred around midnight on Christmas Eve several years ago, with Angela managing to fight off and kill the Seventh Kavalry attacker that targeted her, while Cal also managed to escape, and Angela mysteriously ended up in a hospital bed. This alone gives us a much better and more effective glimpse as to why the Seventh Kavalry is so dangerous, beyond merely making them seem like an unstoppable force that the Tulsa PD somehow can’t contain for whatever reason. We also see how these events have had a huge impact on the Abar family, in particular Angela’s interesting relationship with her adopted son, Topher, whom she shares a surprisingly heartfelt bluntness with, namely when she tells Topher that Crawford has been murdered.

Naturally, the police also immediately suspect the Seventh Kavalry to boot, with Looking Glass, Red Scare and a begrudging Angela coming along for a mass roundup. The citizens of the Seventh Kavalry trailer park naturally don’t cooperate with police too, resulting in a violent confrontation, albeit one that eventually ends with the racists seemingly rounded up successfully. This injects some welcome action into what’s otherwise a very drama-heavy and character-focused episode, though the Seventh Kavalry still feels like the weakest link in Watchmen’s storytelling at this point. They clearly play into the larger mystery in some dramatic way, but we don’t really see the fallout of the operation to apprehend them. Not only that, but if it was that easy to throw the Tulsa PD’s weight around with the Seventh Kavalry, then why were the Seventh Kavalry ever any kind of threat to them to begin with? 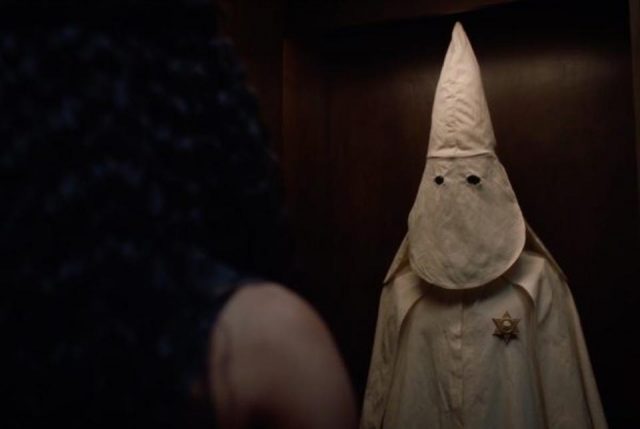 Regardless, Angela undertakes her own investigation, doubting that the Seventh Kavalry are behind Crawford’s death, but being unable to prove it. After Will points her to Crawford’s house though, with Angela walking in while Crawford’s wife, Jane oversees his wake, Angela pokes around a hidden study, discovering some Klu Klux Klan attire hidden nearby! This not only strengthens speculation that Crawford was not killed by the Seventh Kavalry, but also nicely opens up a fresh mystery with Crawford’s character, even after his death. Angela sending her other evidence from Will for DNA study also leads to a pretty intriguing mystery, when its results reveal that Will is apparently Angela’s grandfather! This is no doubt a key detail, since it means that Angela is eligible for, “Redfordations”, the relief money that’s being awarded to both survivors and descendants of the 1920’s attack that Will endured. This alone is interesting, but even more so is Will appearing to be taken away by an alien ship, alongside Angela’s vehicle, when Angela attempts to arrest him at the end of the episode! Well, that’s certainly a weird twist, isn’t it? Certainly a great note to end the episode on though!

We also get another chance to check in with the still-unnamed Lord of the Manor in this episode, and it still seems pretty obvious that he’s supposed to be an aged Adrian Veidt/Ozymandias, with even more evidence mounting to this effect in this second episode. Apparently, Veidt has organized a play with his servants for his amusement, chronicling the transformation of Jon Osterman into Dr. Manhattan so many years ago. While performing the play however, one of the servants is unexpectedly burned alive, with more servants simply taking the corpse away at the end of the show. This is not only a brilliant indication that Veidt’s still very much a sociopath since slaughtering millions for the sake of world peace in 1985, but also a neat way to reveal that Veidt’s servants appear to be clones, something that was also smartly hinted at in this show’s pilot episode. Watchmen’s big, inevitable twist with Veidt’s identity may remain one of the worst-kept secrets in television this year, but these little asides with Veidt are still working pretty well.

“Martial Feats of Comanche Horsemanship” starts better bringing out Watchmen’s potential as a new HBO series, refocusing on a compelling central mystery and dramatic family relationships, while also finding some more entertaining and memorable ways to deliver its heavy exposition and world-building. The show is also doing a better job of embracing a quirky weirdness that nicely complements the otherwise bleak and brooding storytelling here, which is nicely shown when Veidt burns a servant alive for his amusement, and when Angela discovers that her latest arrest is not only her grandfather, but also seemingly in league with aliens. Watchmen is continuing to nicely separate itself from its comic book inspiration in its sophomore episode to boot, while remaining true to the original Watchmen graphic novel’s themes of political corruption, self-imposed misery, and the definition of one’s identity, along with how it can sway their innate morality. There’s just enough callbacks to the lore of the source material, but ultimately, I’m enjoying this series’ desire to be distinct too, especially when its own budding mysteries are starting to get very engrossing in their own right.

Watchmen 1.2: "Martial Feats of Comanche Horsemanship" Review
Watchmen shakes off the rough edges of its pilot episode with a much stronger sophomore offering in, "Martial Feats of Comanche Horsemanship", which delves into Angela's backstory and lineage to strong effect.
THE GOOD STUFF
THE NOT-SO-GOOD STUFF
2019-11-16
90%Overall Score
Reader Rating: (0 Votes)
0%