Supergirl hasn’t really hit the ground running during its fifth season so far, but the show did see a bit of an improvement in storytelling throughout the season’s fourth episode. “In Plain Sight” has the DEO amping up their mission to round up Malefic, while Alex becomes paranoid about J’onn’s evil brother targeting her girlfriend. At the same time, James takes Kelly over to their hometown of Calvintown, where he discovers a surprising change to the town that inspires him to make a difference. Finally, Kara undertakes an investigation of her own, with Nia’s help, to try and look into William’s true origins, inevitably discovering that he’s not who he says he is.

There’s quite a lot of story developments in this episode of Supergirl, but thankfully, most of them are pretty good. The season appears to be setting up some better, more well-rounded story turns between its ensemble here, particularly in the battle against Malefic, which also happens to coincide with Lena hitting a wall with her Q-Wave research. After Malefic ends up easily countering the DEO’s weapons during a sting operation, Alex decides to call Lena for help, and dig out a Martian-killing blaster, despite J’onn’s protests, while also launching a, “Martian Protocol”, to prevent Malefic from entering the DEO. This ends up being pointless however, since Malefic just uses his inception powers to get into the DEO anyway, in turn incepting Alex, and revealing to her the nature of J’onn’s deception. This is a nicely dramatic turn, but it’s annoying that this core plot had to rely on the DEO being incredibly useless in this episode. Their Martian Protocol in particular is a joke, since it completely failed to keep Malefic out right from the jump!

Still, J’onn having to own up to his mind wipe deception with Alex, and eventually with Kara, makes for a nice way to keep improving J’onn’s desire to do right by his family, even after hundreds of years. After Alex appears to reject J’onn and declare him a criminal as well (even if this is another trick by Malefic), Malefic calls J’onn over to the local planetarium, where he just so happens to be cornered by a ton of incepted people, and a blaster-powered Alex! This leads to a pretty good climax, wherein J’onn manages to get Malefic out of Alex’s head, while Kara, and eventually James and Kelly, also assist. Their success also hinges upon Lena and Brainy repairing the Phantom Zone Projector to boot, though the projector does successfully send Malefic to the Phantom Zone this time… Or so it appears. In reality, Lena actually tweaked the Phantom Zone Projector to beam Malefic to a prison in her lab, which will allow Lena and Hope to isolate the frequency needed for Q-Wave manipulation. I have to admit, that’s a pretty good twist, especially for Supergirl standards!

Kara’s investigation into William also ends up effectively setting the stage for the inevitable Leviathan conspiracy that’s been teased since the end of last season. After going to Mexico City and discovering that a contact of William’s has faked her death, Kara runs afoul of a metahuman called Breathtaker (a very obscure character that’s part of a group called ‘The Hangmen’ in DC Comics lore), and manages to capture her, though she doesn’t give up any intel about what’s going on. Some more poking around with the help of Nia does however reveal that William’s identity is fake, eventually leading to Kara finding William’s secret hideaway. William then claims to be working undercover to target Andrea, who appears to be part of some big shadowy agenda, no doubt also related to Obsidian North. At least William is no longer an unlikable jerk, which was apparently part of his cover, and that’s good, since the show seems to be positioning him as a new love interest for Kara, and he certainly didn’t make a great first impression before. 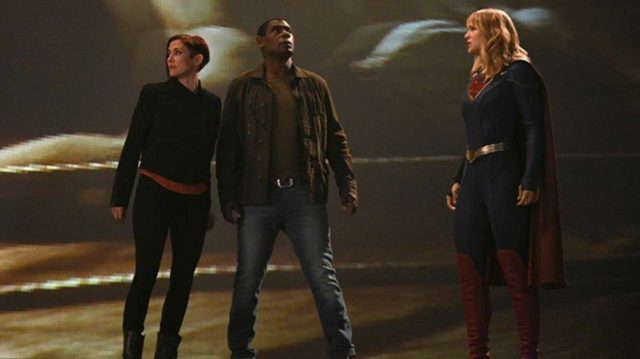 This leaves the James/Kelly subplot in Calvintown, which presents the two with their own interesting scenario, after they find that Calvintown’s citizens have become economically destitute. Upon discovering some teenagers crashing in their aunt’s house, James and Kelly befriend one of the local boys, Simon, who reveals that a new prison complex has cornered the economy in town, while also leading to unreasonable sentences for petty crimes. Okay, granted, this doesn’t totally work that way in real life, where maximum penalties are most definitely a thing in a courtroom, and prisoners aren’t always sent to prisons in their area, but the prison-industrial complex is a real thing, and the effects of a big industry cornering a small town are also a real thing. Sure, there’s gaps in logic, but there’s a sound idea here, namely when it comes to forcing James to get back in touch with his roots.

This also ends up serving as the catalyst through which James exits the show as well. After realizing that the local paper doesn’t have enough resources to fight the prison corruption, James buys the paper, and becomes its publisher, as a loophole to get around Andrea’s absurd three-year no-compete clause from CatCo. This also however necessitates that James leave National City, in order to move to Calvintown. We already knew that Mehcad Brooks would be leaving Supergirl this season, and this is probably the best exit that his character could have asked for, frankly. James’ departure is especially bittersweet too, because James was a lead character that often had the most difficult time fitting into major arcs on the show. He started as a love interest for Kara, then a CatCo mogul, then a wannabe superhero, then a political martyr, and now he’s an independent social justice warrior for a small town. James’ character has never really nailed down a consistently effective story direction on Supergirl, so while it sucks that another of the show’s OG leads is leaving, it’s also true that the lead ensemble probably won’t be adversely affected by ditching James’ character at this point.

Brainy and Nia also mend their strained relationship at the end of the episode, though this is quite blatantly overshadowed by the other storylines, so it doesn’t make much of an impact. The Brainy/Nia relationship remains pretty uneven overall, so it was probably wise to give it less focus here, but I really hope that the predictable, “Brainy is a bad boyfriend” storylines start slowing down from here on out, because they’re really overstaying their welcome at this point. Regardless, “In Plain Sight” still represented an improvement for Supergirl’s storytelling, thanks to a clever battle against Malefic, a worthy exit for James, and some more good developments with the Leviathan conspiracy. William having a false identity also allows the show to start better tooling his character as a would-be partner for Kara, who will no doubt quickly have her hands full at CatCo again soon, after Andrea inevitably realizes that her plot is being rumbled. Lena now cornering Malefic into a partnership should also pay lots of narrative dividends to boot, as she races to corner her own market on mind manipulation.

Supergirl 5.4: "In Plain Sight" Review
Supergirl sees an improvement in its storytelling with, "In Plain Sight", as the DEO openly starts hunting Malefic, and James finds a surprising new calling in his hometown.
THE GOOD STUFF
THE NOT-SO-GOOD STUFF
2019-11-16
83%Overall Score
Reader Rating: (0 Votes)
0%