Black Lightning once again seems strained and scattered in its latest ‘Book of Occupation’ episode, which dumps another clumsy mess of uneven plotlines before the viewer. “The Book of Occupation: Chapter Four: Lynn’s Ouroboros” at least switches things around by letting Jefferson and Lynn headline some of the best storytelling in this case, though by contrast, Anissa and Jennifer are now saddled with less effective plots. Fortunately, Odell is at least continuing to excel as an enigmatic presence, but not even this is enough to redeem a disappointing batch of underwhelming conflicts throughout much of this episode.

Now that Jefferson is allowed back home, he’s able to resume his old position at Garfield High, or so it would initially appear. It turns out however that the ASA’s intervention has led to Jefferson being re-assigned as a guidance counselor, and yet also getting better pay and a reduced workload, despite the apparent demotion. Jefferson being a guidance counselor for Garfield High is actually a smart idea from a narrative standpoint too. Frankly, if Jefferson can’t be principal, this probably should have been his next occupation at Garfield High to begin with. Despite us not seeing the effects of this demotion yet though, Jefferson was also able to contribute a bit to the Anissa storyline in this episode, which presents a promising, yet disappointingly under-utilized idea.

Said idea involves rebels around Freeland starting to appropriate Blackbird’s insignia, using it as an emblem under which to attack the ASA’s checkpoints. This disturbs Anissa greatly, despite her efforts to persist protecting Freeland, and smuggling suspected metahumans out of the city. The lack of focus on the Blackbird rebels really felt disappointing here though. Worse still is that a large chunk of Anissa’s plot involves a lot of forced squabbling with Jefferson too, which leads to more insufferable moping and whining from Grace. Jefferson eventually motivates Anissa to help him break some prisoners out of the ASA-hijacked police precinct, after one of Jennifer’s classmates is forcibly taken there, but Anissa was left to do nothing but field bitching and moaning this week otherwise. This is obviously a dis-service to Anissa’s character, especially when it means that the episode weirdly fails to capitalize on so many other promising ideas for Anissa here.

Jennifer, likewise, also suffers through an especially lacklustre storyline in this episode, as another promising story idea ends up being squandered on her. The fundamental premise of this idea is sound at least, since it involves Jennifer coming around to the idea that maybe the ASA occupation is good for Freeland. Obviously, this is a controversial turn for Jennifer’s character, one that works well in theory, since Jennifer is a young, impressionable character who could very easily fall victim to Odell’s manipulations. This Jennifer arc’s result however is Jennifer being moved to literal tears and anguish by archive footage that Odell sends her (I get that it’s sad, but come on, this is a little over-the-top!), before the episode gives way to a painfully on-the-nose ‘debate’ about military occupations and false government saviours. Yet again, The CW is seeing fit to spell out the social commentary in a DC drama, for the drooling idiots in the peanut gallery. As I’ve said before, it’s bad enough when a show like Supergirl or Batwoman does this, but Black Lightning is allegedly marketing itself to an older, more mature audience, so this adolescent social justice-fueled squabbling doesn’t belong here most of all, especially when it’s done so poorly! 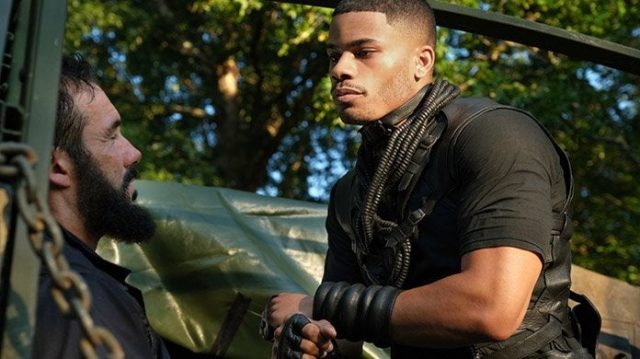 At least Lynn headlined a better story arc here though, as she believes that she’s synthesized a non-addictive, non-psychotropic version of Green Light that can be used to enhance her intellectual acumen. This is a great way to build off of the mounting pressure on Lynn to come up with a cure for Dr. Jace’s alleged metahuman-targeting virus, something that eventually leaves her severely sleep-deprived, and addicted to her work. Lynn managing to save some patients is well and good, but once again, Odell really helped this storyline excel more than it otherwise would have, namely when he confides in one of his military goons that he intentionally spiked Lynn’s drinks with addictive Green Light supplements! Lynn is on Green Light without even knowing it, in another twisted Odell experiment that continues to wonderfully flesh out Odell’s seemingly amoral, yet exceptionally intricate agenda in Freeland. As much as Odell probably seems like a jackbooted thug to most of Freeland’s citizens by now, he’s clearly much more intelligent and devious than he appears, and the question of whether Lynn has become Green Light-addicted for good or for ill is one that will nicely hang in the air, especially considering  that Black Lightning is taking an extra week off the air after this.

Some more awesome Khalil-driven action bits also nicely filled out the rest of the episode, as Odell sends Khalil to fetch some trucks that are being stolen from the ASA’s inventory. Khalil and Odell can always be counted on to create compelling story material, even in a disappointingly weak third season for Black Lightning so far, plus Jefferson and Lynn also delivered some great plotting in this episode’s case too. That still however wasn’t enough to change the fact that there was too much scattered, undercooked plotting dragging down the show yet again in this episode. Anissa’s and Jennifer’s arcs particularly suffered in, “The Book of Occupation: Chapter Four: Lynn’s Ouroboros”, resulting in lots of squandered promise from their latest character turns. Jefferson also sometimes got dragged down by more contrived and annoying Grace drama to boot, even if he and Anissa at least got to tear it up a bit at the precinct during the climax. The ‘Book of Occupation’ story pod has been going on for quite a while at this point, and I wish it wasn’t constantly biting off more than it can chew. Some tightened plotting could do Black Lightning a lot of favours after a shaky start to the season, but maybe the extra week off will help the show re-focus and stop trying to do everything at once.