Arrow finally brought its future Team Arrow 2.0 into the present day at the conclusion of its previous episode, allowing Oliver’s present-era team to meet their future successors in one heck of a twist! While this is no doubt partially an effort to set up The CW’s planned Green Arrow & The Canaries spin-off for next season, assuming that series gets picked up by the network, it does also provide a solid opportunity for the present-day Team Arrow to face their futures in, “Present Tense.” This also naturally coincides with a fresh Deathstroke sighting in Star City, which leads to a hospital bombing, and appears to suggest that the adult JJ Diggle may have also made his way to 2019 alongside William, Mia and Connor!

This premise allows, “Present Tense” to start out with an initially interesting hook, especially since we can now mercifully move on from Arrow’s underwhelming League of Assasssins storyline once again, and revisit a much better season arc from Arrow’s past, namely that of Deathstroke and his rampage through Star(ling) City from Season Two. The interactions between both eras of Team Arrow certainly don’t disappoint either, though Arrow still struggles to recapture the same narrative high points from Season Two here, due largely to forcing several conflicts that yet again stem from the future-era Team Arrow pointlessly keeping secrets and refusing to trust each other’s judgment. This is a problem that still sometimes plagues the present-day Team Arrow, in fairness, though it’s usually when the story can’t find a better excuse to create drama.

That’s what drags down an otherwise interesting idea here; Arrow has to rely on one of its laziest storytelling devices to create character conflicts in this episode, despite this being a necessary evil to some extent. After all, just as the present-day Team Arrow has to face their supposed futures, along with the failures that came with them, the future-era Team Arrow has to witness the beginning of their own future, along with making the same mistakes that the former/current heroes made. This is especially apparent with Mia, who quickly resents Oliver for abandoning her, and decides to stubbornly go off on her own to investigate and kill the new Deathstroke, who, as it turns out, is actually Slade Wilson’s other son, Grant Wilson. I guess some of that aborted Star City future from Legends of Tomorrow still remains in the current timeline.

The idea of the Deathstroke Gang initially emerging as heroes that target the corrupt rich people and politicians in Star City is great to see in motion, as is Grant relying on more sophisticated subterfuge than the rather blunt, Mirakuru-powered assault that was orchestrated by his father six seasons ago. The problem however is that this once again amounts to a tired conflict of Mia wanting to murder Grant for revenge, in order to prevent JJ eventually taking over the Deathstroke Gang and thus killing Zoe, which she inevitably won’t go through with, because both Oliver and Laurel talk her down. The story hook of Diggle and Rene having to process Zoe being murdered by a future JJ meanwhile generally fares better, but it’s still overly dependent on the future Team Arrow pointlessly keeping secrets from their present-era progenitors, for no other reason than to create forced arguments and pointless melodrama, which does nothing but stall the storytelling. 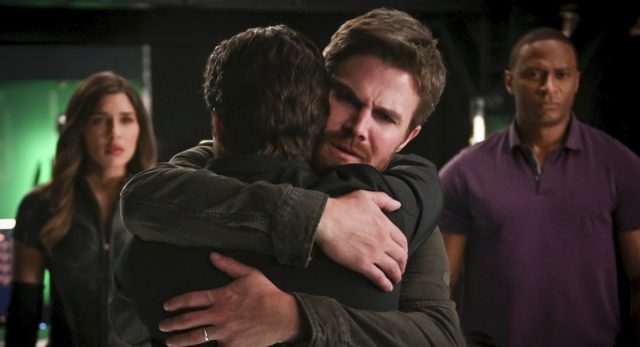 Another issue with the characters constantly bellyaching about the future, and how they supposedly fail to save Star City, even after Oliver’s apparent demise, is that the Arrowverse has already firmly established that time is not set. It’s true that Team Arrow hasn’t dealt with timeline alteration nearly as much as Team Flash or the Legends of Tomorrow have on their respective shows, but they were also directly affected by the timeline change that occurred at the hands of Barry Allen during The Flash’s third season, not to mention that the crossovers, and the fact that the then-future Legends consulted Arrow characters before forming that team under Rip Hunter, have given Team Arrow plenty of indication that time is malleable, and can be changed when the past is altered. Thus, a lot of this episode’s future-driven drama doesn’t land, because Team Arrow clearly exists within a universe where the timeline is flexible. The result of Rene doubling down on his mayoral run is fine, as is Dinah and Rene alike both staying the course and trusting that they can create better futures, but yet again, this forced drama over a future that can quite simply be changed, according to the Arrowverse’s rules, does nothing but waste time.

Fortunately, we are treated to yet another reunion with a formerly departed character on this episode of Arrow, and that’s Curtis, sporting a beard, and apparently being called in by William, since William is only an expert in future algorithms, not present ones. I wonder if there’s a bit of an editing goof here, actually, because William claims he called Curtis after Curtis already shows up in the bunker, seemingly unannounced, which is a little distracting, but oh well. Anyway, the team-up between William and Curtis, which allows Team Arrow to locate and stop Grant, is pretty entertaining, while also helping to compensate for the fact that Felicity has also been written out of the series at this point. Curtis’ return to Team Arrow doesn’t fit quite as smoothly as the previous reunions with characters like Moira, Malcolm, Tommy, Tatsu, Thea and Talia, since William seems to be smart enough to figure out any computer riddle on his own (sure, Curtis is studying the anti-matter-affected cloth for Oliver too, but that honestly should be a job for someone like Cisco/Team Flash, who have actually dealt with other realities before), but it’s nice to see Curtis back anyhow, even if he disappointingly doesn’t suit up as Mister Terrific again. 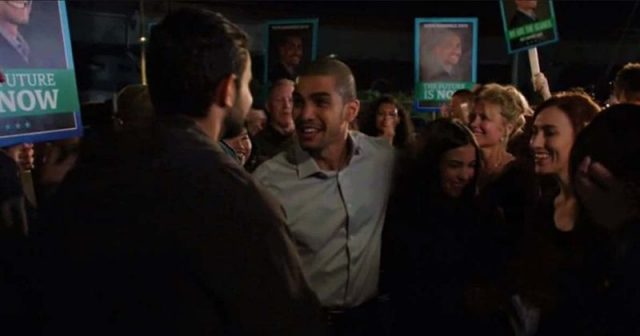 “Present Tense” at least manages to be an improvement over the somewhat tedious episode that Arrow delivered beforehand, but it’s still saddled with a few annoying story devices that the show really should have grown out of by this point. I do understand the idea of the future Team Arrow repeating some of the mistakes of the present Team Arrow, along with the present Team Arrow having to face and rise above their apparent failings in the future, but it’s not totally executed smoothly, since a lot of the drama still has to be forced by blatantly bad decisions from both sides. There are some decent ideas within the rise of the Deathstroke Gang however, especially since Mia doesn’t ultimately go through with her plan to kill Grant, suggesting that JJ could still become a baddie in the current timeline. There’s the rub though; The timeline is never set in the Arrowverse. Thus, designing an episode around whining over the timeline, and one proposed future, doesn’t accomplish much more than making the characters look bad, or at least as if they haven’t been paying attention after their exposure to other Arrowverse heroes like The Flash and the Legends. The prospect of Oliver and Mia teaming up for a Bratva reunion is once again pretty exciting though, so let’s hope that upcoming storyline ends up being a little more consistent.