Batwoman appears to be slowly gaining a foothold on its storytelling, even if the series still has a ways to go before it truly catches up with the appeal of most of the other Arrowverse shows. “I’ll Be Judge, I’ll Be Jury” did manage to present a pretty interesting villain-of-the-week though, one that ends up having some surprising implications for Luke. At the same time, Alice takes her next step in her mysterious plan, alongside Mouse, which just so happens to involve a super-secret weapons project being developed at Hamilton Dynamics.

Granted, there are still some very noticeable problems in, “I’ll Be Judge, I’ll Be Jury”, but it’s still a cut above most of the lacklustre Batwoman episodes that we’ve been stuck with so far. The episode kicks off once a new masked criminal called, “The Executioner”, a very obscure one-off Batman villain from DC Comics lore, electrocutes a beloved prosecutor to death, which leads to Gotham City’s cops wanting to call on Batwoman to help. Naturally, Jacob is pretty angry about the police turning to a vigilante over the Crows, but Kate is nonetheless determined to prove herself as a worthy new hero to the city, by rounding up the Executioner herself, and delivering him to the GCPD.

What begins as a fairly straightforward superhero rite-of-passage however eventually leads into a genuinely interesting hook, particularly when a detective is subsequently killed by a series of rigged guns, suggesting that the Executioner is using methods of capital punishment to dispatch his targets. Better still is Kate finding evidence that the Executioner, who was the actual Executioner for Blackgate Prison for over two decades, is targeting a cabal of publicly beloved law enforcement officials, who are actually quite corrupt, and are both forging evidence and coercing confessions. This is already a solid turn, but it gets even more interesting when Luke reveals that the dead prosecutor was the one who got a conviction for the man who killed Luke’s late father, Lucius Fox, Batman’s former gadget-maker, who was murdered during Luke’s high school graduation party several years ago. This conflict-of-interests for Kate was a great way to make her mission more complicated, while also further developing Luke to solid effect.

Unfortunately, this otherwise strong villain-of-the-week plot does trip up a bit at the finish line, wherein Kate reaches the third target, a corrupt judge, and ends up sealed in a courtroom with Jacob, as it fills with deadly gas. After the Executioner nearly kills Kate, Jacob shoots the guy dead, only to trigger a dead man’s switch that locks the courtroom down, and fills it with said hydrogen cyanide fumes. Yes, this is a trap so unrealistic and contrived that it would practically be at home in the campy 1960’s Batman show, but it does at least present a nice scene with Kate and Jacob, where Jacob admits to Batwoman, obviously not knowing that she’s his daughter, that he blames the Bat Symbol because his only other choice is to blame himself for the death of his wife and the loss of his daughter. Kate does manage to get herself and her father out of this situation though, by igniting the gas, and shielding Jacob with her cape. This explosion-resistant cape appears to be a nod to 1995 movie, Batman Forever, where Batman did the same thing at one point, but it was just as stupid there as it is here. Also, wouldn’t burning the hydrogen also eliminate most of the oxygen too?

Regardless, there’s yet another interesting hook with Sophie in this storyline, though both of this episode’s subplots felt disappointingly undercooked, even this more interesting Sophie idea. After Sophie is injured during the firing squad attack, and whispers that she knows Kate is Batwoman, Kate is forced to stash Sophie at Mary’s clinic, which, again, finally allows Mary to be useful as more than an irritating nuisance in this case. Mary stitches Sophie up, despite Sophie’s efforts to escape, and also honours Batwoman’s request to keep Sophie out of the way, since Sophie will inevitably want to tell Jacob about his daughter’s new vigilante hobby. This is a very interesting idea, one that will nicely flesh out the tense relationship between Kate and Sophie even more, but the fact that Sophie knows Kate’s Batwoman identity never really has a payoff in this episode. Instead, Sophie eventually walks out of the clinic, and then… Nothing happens. There’s no effort to throw Sophie off the scent either. Seriously? I feel like this is a storyline that should have been presented as a core storyline in its own episode, rather than sandwiched within another, more interesting battle for Kate’s Batwoman identity.

The remaining subplot involves Alice and Mouse, as I mentioned. Mouse is being disguised as a head scientist on Catherine’s current research project, which is a miniature rail gun that can fire high-velocity bullets capable of penetrating the Batsuit. Obviously, this item would be of great interest to Alice, but Mouse nonetheless becomes paranoid, after Alice appears to be less than willing to utilize violent methods, seemingly because of Kate’s influence. Mouse steals the weapon anyway, even killing the original head scientist with it, but again, there’s no payoff here. Instead, Alice and Mouse just immediately reconcile at the end of the episode, and on top of that, there’s no fallout from the scientist being rather conspicuously killed by the stolen weapon either. Maybe Catherine will notice this theft in the following episode, but as it stands, the Alice/Mouse spat is too short-lived, and only seems to be there to eat up a chunk of this episode’s spare running time. 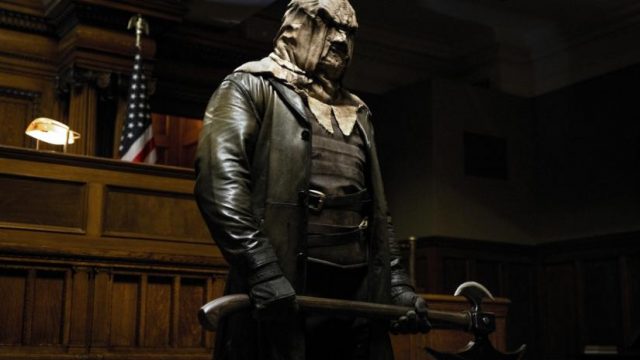 Again though, I’ll take small victories where I can get them in Batwoman, and this episode presents another small, but noticeable victory for the show’s problematic writing. “I’ll Be Judge, I’ll Be Jury” manages to deliver a pretty solid core storyline with Kate, who faces a legitimately interesting villain that taps upon morally complex issues related to the American legal system. Those issues don’t ultimately get resolved here, including Luke having to face the possibility that the wrong man was convicted after his father’s murder, but that feels appropriate, since these big questions truly don’t have easy answers. Jacob having to accept his reasons for hating the Bat Symbol was also pretty good, even if this had to be done in a rather ridiculous climax. It’s too bad that the subplots didn’t manage to excel though, with no real fallout or payoff on either count. Still, I’m interested to see what comes next with Sophie in particular, now that she has a more interesting reason to revisit her former failed relationship with Kate.