With The Walking Dead only having a handful of episodes left for the rest of 2019, the series has decided to start seemingly looking forward to new threats. “Bonds” proves to be a slight uptick for the series as well, with its suspenseful storytelling and mysterious turns. There’s also some good moments that will tickle fans here to boot, such as Negan taking his first steps with the Whisperers, while Carol and Daryl undertake a mission together. Some storylines are a little less interesting, but for the most part, The Walking Dead managed to be relatively exciting in this case.

That Carol/Daryl team-up is something that’s bound to be especially appealing to longtime series loyalists, especially those that are shipping the romantic prospects between these two characters. Personally, I could care less if Carol and Daryl ever become an item, but regardless, we did get to see them teaming up to do some recon on Whisperer territory. This primarily involved trying to spot where Alpha is sending walker herds from, in hopes of preventing a future attack. Needless to say though, Daryl has his suspicions about Carol’s true motives, even digging through her belongings when she quickly steps away, in order to determine whether Carol is simply waiting to take another shot at Alpha. 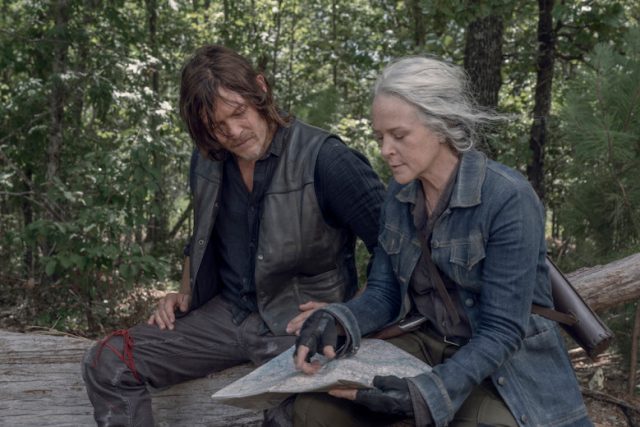 While there’s no initial evidence that Carol would want to do something so reckless, the two do nonetheless find themselves on the other side of Alpha’s territory before long, when a distant view doesn’t prove helpful. This is a fairly dramatic moment, especially considering how aggressively Alpha has been inclined to punish the show’s protagonists whenever they quite literally step out of line! Despite that however, Carol ends up stupidly breaking a stick, which attracts walkers and Whisperers alike to hers and Daryl’s location. This felt pretty careless even by Carol’s standards though, and seemed like it only happened to force some more threats where there otherwise shouldn’t be any. Like Carol says, she and Daryl are some of the most proficient survivors among The Walking Dead’s protagonists, so they really shouldn’t be this inept at movement! Still, Carol does manage to bag a Whisperer in the end, with Daryl begrudgingly agreeing to take the guy back to Alexandria, in hopes of grilling him for information about Alpha’s operation.

While that’s going on, Alexandria also appears to be facing another issue, as a growing stomach flu appears to be taking hold in the town. The affliction has even hit Rosita pretty hard, resulting in Siddiq stepping in and out of the clinic to help take care of Coco. Eugene, meanwhile, has started to mend his relationship with Rosita over the radio, if for no other reason than Rosita’s growing boredom. Rosita is nonetheless pulled away eventually though, after her worsening symptoms motivate Siddiq to drag her to the infirmary, where an increasingly overwhelmed Dante has begun setting up beds, in order to try and combat worsening symptoms. Naturally, this unilateral decision initially doesn’t sit well with Siddiq too, especially when Siddiq remains stressed about his continued PTSD, after his capture by Alpha last season.

While the show really needs to start doing something with Siddiq’s flashbacks, rather than just constantly teasing them, Eugene’s storyline also felt like it stalled a bit here, even if it presents some interesting promise for later. Eugene spends the bulk of his subplot talking to a mystery woman over the radio, who makes contact with Eugene’s blast from Alexandria, wherein he attempts to find more displaced survivors. This unknown woman ends up reaching out to Eugene at this point, and Eugene, being lonely, decides to strike up a conversation with her. This is an interesting idea, as well as a nice little character moment for Eugene. What’s frustrating here though is that this woman refuses to tip Eugene off as to who she is, or where she is. Well, if this woman isn’t in trouble, isn’t lonely, and doesn’t need help, then why is she responding to Eugene’s blast? I’m sure that this is a setup for later, since Eugene and this mystery survivor are going to keep talking, but the whole storyline just stalled the momentum of the episode, and didn’t have a truly effective payoff at this point.

Fortunately though, we got another superb Negan subplot that knocked it out of the park in this episode, as Negan ends up being taken in by Beta, and put under a grueling training regimen with the Whisperers. Alpha is determined to put Negan to the test, though Beta doesn’t trust Negan, and believes that he should simply be killed. Considering Negan’s efforts to make reparations for his misdeeds while in charge of the Saviors, it is entirely possible that Negan is a mole for Alexandria too, and that Beta is correct to be suspicious of him. It’s also entirely possible that Beta just finds Negan really annoying though, and wants him dead on that basis. Negan’s bravado getting on Beta’s nerves was both hilarious and undeniably suspenseful, eventually leading to Beta killing one of his own men to send a group of walkers after Negan! This appears to do Negan in for good at first, but inevitably, Negan just saunters up to Alpha without a scratch soon afterward, leading to Alpha officially accepting Negan as one of her own. So, Negan is a Whisperer now. This could be very good for the show’s protagonists, or very, very bad. Either way, I’m very much looking forward to seeing what comes of Negan’s new membership with Alpha’s crew! 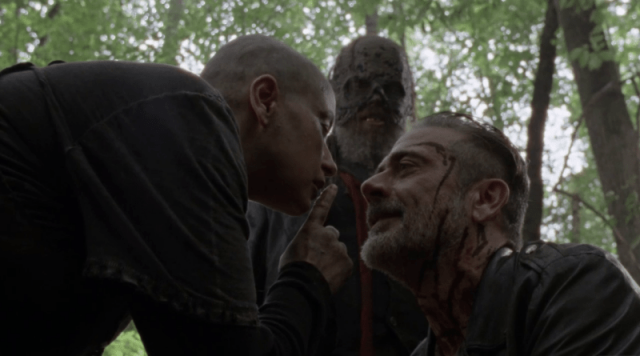 Even if the storytelling remains pretty slow-paced for now, “Bonds” ends up being a better episode for The Walking Dead than much of this season has delivered so far. The Eugene subplot didn’t feel as rewarding as it could have, and Carol acting like a dope feels pretty out-of-character, somewhat hurting her otherwise great team-up with Daryl, but the awesome Negan/Beta subplot more than made up for this. Not only that, but the brewing infection taking hold at Alexandria also sets up a pretty promising story turn for the show’s impending midseason finale, especially when we’ve clearly seen that Siddiq is really struggling to hold it together at this point. Carol so flagrantly stepping across Alpha’s borders, and dragging Daryl with her, is also something that could have grave consequences with Alpha, and now that Negan is among her ranks, the Whisperers have yet again found an unexpected way to become more dangerous than ever!