The Walking Dead presented one of its most shocking and upsetting character deaths in quite some time during its previous episode, when Siddiq met his untimely demise at the hands of Dante, freshly revealed as a Whisperer spy within Alexandria. This presents an excellent foundation for the show’s subsequent midseason finale, “The World Before”, which picks up in the aftermath of Siddiq’s death, just in time for a surprising tip to come from Gamma. At the same time, more unexpected events occur at Oceanside, which seem to set in motion a quest that will likely lead to Michonne’s planned exit from the series.

The sheer horror and excitement behind the tragic loss of Siddiq definitely starts this episode off on a great note, with Rosita stumbling upon the scene of Dante having just murdered her baby daddy. Rosita manages to fight Dante off, knocking him out with a brutal flurry of punches, before taking out the re-animated Siddiq in an effort to protect Coco. This clearly sets off huge emotional shockwaves among Alexandria’s leadership, as they must come to terms with the fact that they’ve secretly harboured a Whisperer in their town for the past several months. The incident with Dante also nicely presents a dilemma that echoes how Alexandria ultimately chose to deal with Negan, after prevailing in the war against the Saviors. After all, the treachery of Dante once again gravely threatens what the community appears to stand for, motivating them to consider a very difficult decision. 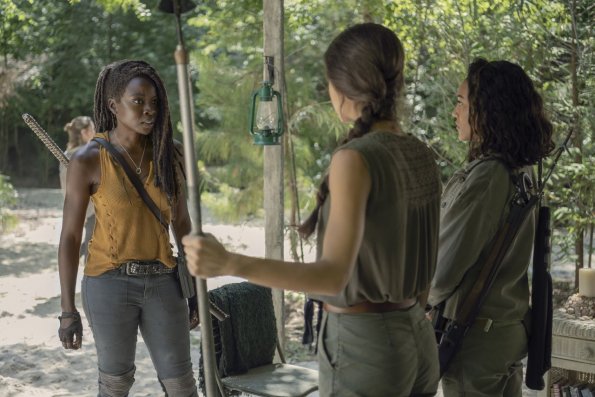 While this does tread a few all-too-familiar notes for The Walking Dead at this point, the emotional fallout from Siddiq’s murder, and Dante being revealed as such an efficient sociopath, is at least portrayed remarkably well. This is another great test to see how well Alexandria can stick to their principles, especially since they’re currently facing an enemy faction that’s all about embracing the collapse of society, and the belief that walkers are a path to the true, animal-like future. Dante naturally gets imprisoned, at the very least, but the debate about what to do with him is easily the highlight storyline in this midseason finale. The result of this storyline is also quite shocking and satisfying to boot, as Gabriel enters the cell, appearing to preach to Dante about the power of Alexandria’s values, before suddenly stabbing Dante to death in a fit of rage! This is the most vicious and unhinged that we’ve seen Gabriel since, well, likely ever, particularly since Gabriel is no doubt motivated just as much, if not more, by the endangering of Rosita, rather than the mere loss of Siddiq.

Outside of Alexandria however, this midseason finale suffered from a rather noticeable bleed of story momentum. There are two subplots that unfold outside of events at Alexandria in this episode, one of which surrounds Michonne, Judith and Luke during their trip to Oceanside, while the other involves Aaron headlining a mission to try and find Alpha’s herd. There’s some decent suspense in this Alpha storyline, which manages to be engaging enough in concept, even with The Walking Dead’s final episode of 2019 making the bold decision to leave the Whisperers, Negan and Lydia alike completely out of it, while Alpha is only seen sparingly towards the end. Aaron’s party has also made it their mission to find the runaway Lydia, mind you, but they obviously don’t do so, instead stumbling into a fresh predicament to serve as a big cliffhanger, before The Walking Dead goes off the air for two months. 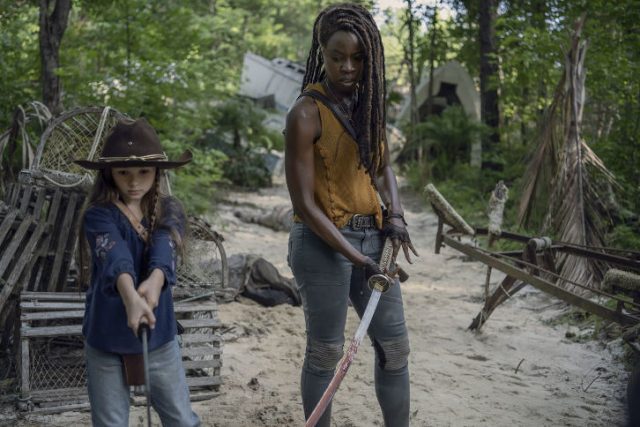 Unfortunately, the pacing of this storyline can be a little sluggish, especially when it naturally relies on a few contrivances. This subplot starts out well enough at least, as Gamma talks to Aaron again, asking if she can see her infant nephew. In exchange, Gamma offers a valuable tip to Aaron; The location of Alpha’s hidden walker herd! This is extremely valuable intel to Alexandria, so it’s no surprise that Aaron assembles a party to investigate Gamma’s tip. Once this takes place though, the entire storyline is just a lot of wandering, which eventually leads to the herd seemingly not being where Gamma said they would be. This feels too obvious, and worse still is that the storyline once again involves Carol recklessly charging around like a moron, and predictably taking the bait of Alpha’s presence, forcing Daryl and the rest of Aaron’s group to run after her. When all is said and done, this ends with the group being dumped in a dark cavern, surrounded by Alpha’s herd of walkers, as the episode ends. This ironic cliffhanger is fairly clever on paper, but it’s frustrating that this subplot felt so slow-paced, only to offer a weak payoff that once again forces Carol to act like an uncharacteristic idiot. I get that Carol is grieving and suffering over the death of Henry, but she’s supposed to be a much stronger and smarter character than this!

As for what goes down at Oceanside, this subplot properly unfolds after a brief trip to the library to get some books for Judith (and Luke). While doing this, Luke is ambushed by some walkers, only to be saved by a mysterious man, right around the time that Michonne is informed via her walkie that Siddiq has been murdered. This spurs Michonne to want to return to Alexandria as quickly as possible, only for another walker attack to unfold at Oceanside right when Michonne’s group arrives, which eventually culminates with the same man that saved Luke being caught trying to steal a boat. It turns out that this mystery man is Virgil, a survivor simply looking to reunite with his family, who doesn’t want trouble with Oceanside. Virgil apparently comes from an old military base that’s packed with useful weapons too, promising to ‘pay his debt’ with those heavy armaments, as a decisive means to destroy Alpha and the Whisperers once and for all! More likely though, this turn merely appears to set up the fast-approaching exit of Michonne, since we already know that Danai Gurira will be leaving The Walking Dead this season. Also, is it just me, or were the walker attacks in this subplot extra contrived? How the hell did no one hear walkers, or a screaming Luke, in a damn library of all places?! Moreover, how did a bunch of random walkers get the drop on Oceanside to begin with? Aren’t its defenses better than this?! 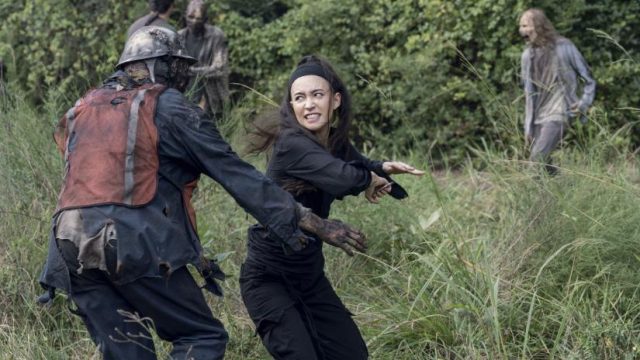 It sucks that most of the worthy story momentum in, “The World Before” seems to be almost entirely contained to the core Alexandria storyline, with the rest of the episode being filled out by less interesting and less rewarding subplots. Mind you, The Walking Dead has certainly delivered worse midseason finales at times, but it’s also had noticeably better ones too. Considering that this is the final episode of The Walking Dead for 2019, it just felt like the story was missing something truly special here. That being said, the fallout of Siddiq’s death in Alexandria, and the violent reaction from Gabriel, exceptionally addressed the shocking and tragic loss of one of Alexandria’s most important characters, while also throwing Rosita, Gabriel and Eugene for a loop in particular. There are also plenty of interesting loose ends in the storytelling surrounding the conspicuously-absent Whisperers to keep lingering fans buzzing, as we settle into The Walking Dead’s traditional Winter break. Last year’s big midseason Whisperer cliffhanger definitely felt more exciting than Carol stupidly leading several protagonists into a walker pit here, but at least Alpha is still keeping her potent head games deviously strong, once again being one step ahead of even the best that Alexandria currently has to offer.