Now that Watchmen’s debut season is in its latter half, it’s easy to get the sense that the overall puzzle forming the series is starting to resemble something recognizable, and deadly. “This Extraordinary Being” once again delivers a specialized storyline, this time with Angela under the influence of her grandfather’s Nostalgia pills. This leaves Angela stuck in the 1930’s and 1940’s, during the rise of the Minutemen in Watchmen lore, which occurs when a young Will Reeves first joins the New York City police force, and is forced to put on a mask to save a couple being mugged, after just barely surviving an intimidation lynching by white cops. If that’s calling to mind a familiar motif among the Minutemen, then you’ve been paying attention, since a particular ‘Minuteman’ has been staring us in the face the whole time, one that finally puts together several vital pieces of Will’s backstory, and how they relate to Angela.

If you didn’t piece it together before, you definitely will in this particular episode, as Angela lives her grandfather’s past experiences, which are certainly very different than how they’re portrayed on fictional series, American Hero Story. In case the previous clues didn’t make it obvious, the true origin of Will is finally spelled out in this episode; Will is Hooded Justice, one of the original Minutemen from the 1940’s! Previous Watchmen media appeared to indicate that Hooded Justice was Caucasian, but we never did find out his identity. This episode explains the race discrepancy by revealing that Captain Metropolis insisted that Will put on white make-up around his eyes, to make him merely appear Caucasian, when he was actually a black man the whole time. This actually makes an astonishing amount of sense, considering the time period, and the fact that the clues were all there regarding Will’s identity, right from this show’s first episode. 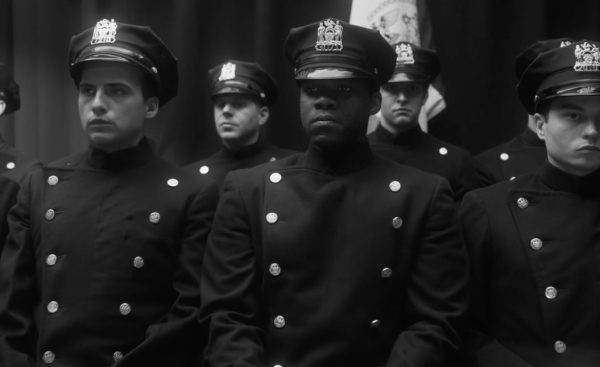 This twist essentially makes Hooded Justice one of the now-most important characters in Watchmen lore, despite the fact that he was mostly a footnote in the canon of the original Watchmen graphic novel, and its subsequent 2009 film adaptation. Through Angela’s drug-addled eyes, we see in painful, monochrome detail exactly how Will is ostracized and intimidated by his fellow cops, eventually leading to him hiding his identity, and in turn creating the inspiration for the Minutemen. Naturally, Will throwing himself so deeply into the Minutemen operation also strains his marriage to his wife, June, who, as it turns out, was the baby that Will rescued after initially surviving the attack of the 1920’s. These are all great payoffs to the mysterious backstory of Will/Hooded Justice, but one disappointment is the fact that Will’s homosexual affair with Nelson Gardner/Captain Metropolis is pretty heavily glossed over. One could make the argument that Will doesn’t exactly remember how the affair started, but it’s quickly shown as occurring right before the Minutemen form, very quickly in fact, and then it has no bearing at all on the storyline. Considering that Hooded Justice was a well-known gay character in the Watchmen graphic novel, this is a bit disappointing, trading his appeal as a gay man (who, let’s face it, is more or less bisexual now), to create new appeal for Hooded Justice as an undercover black man.

Still, the rise and fall of Hooded Justice, which details the well-meaning mission of the Minutemen, and how it eventually devolved into increasingly violent and unstable vigilantes, is all very interesting and engaging stuff. The episode even gets nicely interrupted every so often, reflecting Laurie desperately trying to snap Angela out of her vision, and eventually enlisting the help of Cal to do so. This obviously doesn’t work though, with Angela forced to witness every horrible tragedy, every failure, and every defeat by Will, up to and including Will having a son, who is eventually taken away from him by his wife. Like I said, the initially confusing storyline of this series is really starting to make a horrifying amount of sense now, up to and including why the show is dealing so much with the idea of a racism-driven threat. It’s still a little head-scratching as to how the Seventh Kavalry became so absurdly powerful in this world, but I suppose that the Watchmen world has always been rather politically topsy-turvy, so I guess I can suspend my disbelief well enough there.

This excellently rewarding exploration of Will’s backstory as Hooded Justice eventually culminates in a couple of vital clues regarding what’s facing the show’s heroes in the present. Shortly before Will’s wife leaves him, for example, he discovers that a cabal of white men, using film projectors, are mind-controlling black people into hurting and killing each other, using a book on, “Mesmerism”, the same book that Wade/Looking Glass stumbled upon during the previous episode! This appears to make the agenda of the Seventh Kavalry very clear; Repeating the same mind control experiment in the present day, to some unknown end. Likewise, this also indicates exactly how Will ‘hung’ Judd Crawford in Watchmen’s first episode, which is to say, he coerced Crawford into hanging himself, after learning of Crawford’s KKK ancestry. Will wielding the same mind control device that he formerly tried to stop raises a whole new batch of questions, but it does put the rest of the pieces in place for Angela, who wakes up in the care of Lady Trieu at the end of the episode, likely to start rehabilitation after her long, trying drug trip.

“This Extraordinary Being” continues to beautifully bring together the once-confusing world of HBO’s Watchmen series, shedding valuable light on how Will fits into the story, and how he’s ended up shaping Angela’s legacy as another masked police officer. The twist of Will being a geriatric Hooded Justice, who in turn was the original inspiration for the Minutemen of Watchmen lore, was executed wonderfully, as was the detailed history of how vigilantes came to prominence, before later descending into violence and apparent psychopathy. The idea of masked heroes becoming corrupted through no fault of Will’s own is very effectively gloomy, since Will always just wanted to do the right thing, but he always seemed to exist in a world that simply wouldn’t let him. This idea of powerlessness against great evil and destruction is another theme that’s frequently explored in Watchmen media, as well as the inevitable tragedy that comes from single-handedly trying to change the world according to your own vision for it. It’s a tragedy that’s reflected in Will Reeves, in Adrian Veidt, in Rorschach, in Dr. Manhattan, and now, it’s starting to make its way to Angela, who will no doubt become the best hope against another world-changing tragedy set to unfold on this show. Something tells me that Angela’s rehab is not going to be easier than her initial drug trip into the past either, and that’s assuming that one can even trust Lady Trieu in the first place.