The Mandalorian has wrapped up its inciting incident across its first three episodes, leaving the fourth episode to experiment with a different kind of status quo for the series. “Chapter 4: Sanctuary” takes the titular character and his charge to an out-of-the-way planet with a very low population density, Sorgan, where The Mandalorian decides it would be best to hide out with The Child. After trouble inevitably finds him again though, The Mandalorian must team up with a Rebel Alliance veteran to save the local villagers, after some surprising Imperial tech finds its way into the hands of some nearby bandits.

This essentially re-positions The Mandalorian as an adventure-style series, rather than a morally ambiguous thriller, at least for this episode. The switch is a little bit jarring, and frankly, not quite as good as the show’s first three episodes, even if the heartwarming storyline in this fourth episode still manages to be fairly engaging. Since The Mandalorian doesn’t have a full hour to work with between its episodes though, it feels like the storytelling felt weirdly expedited in this case, pushing a self-contained narrative across just one episode, when it logically should have occupied two or three of them. If nothing else though, I guess it’s nice that The Mandalorian doesn’t want to settle into a creative rut.

Early in the episode, The Mandalorian ends up being attacked by a mysterious woman in the local bar, a former Rebel Shock Trooper, named Cara Dune. Cara is played by Gina Carano, in an entertaining guest turn that gives The Mandalorian some contact with the remnants of the Rebel Alliance, after he previously had to deal with some leftover Imperial forces during his first hunt for The Child. After realizing that The Mandalorian wasn’t sent for her, Cara shares her experiences of cleaning up in the wake of the Battle for Endor from Star Wars: Episode VI – Return of the Jedi, and how it didn’t give her the kind of experience that she sought. Through The Mandalorian, Cara finally gets a chance to fight for something better again, at least, once The Mandalorian makes it to the nearby village, which, as I mentioned, has a problem with being raided by bandits. This motivates the village to try and hire The Mandalorian to protect them, with virtually every bit of currency that the people can spare.

Considering that The Mandalorian held his own against a whole squad of former Imperial Stormtroopers during the previous episode, along with an entire town’s worth of bounty hunters, bandits by themselves wouldn’t be a big deal. The problem is however that the bandits have somehow gotten hold of an Imperial AT-ST, something that once again has The Mandalorian, along with Cara, whom he hires to assist, doubling back on their commitment to protect the villagers. This is the point where this episode especially starts to struggle in terms of pacing and execution though, since The Mandalorian and Cara trade perspectives on what to do with the villagers and the AT-ST, seemingly at random, which eventually ends with them deciding that the AT-ST can’t be destroyed, shortly before they formulate a plan to destroy it. Yeah, the writing gets pretty shaky here. 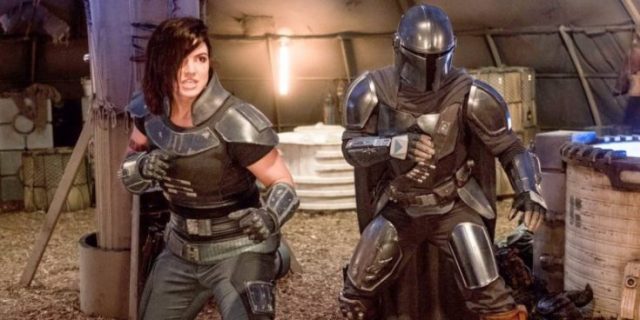 It is admittedly a little cool to see The Mandalorian team up with another accomplished warrior, with both training a squad of villagers to eventually be able to hold their own against the bandits, thanks to a fresh donation of blasters, and the surprising shooting arm of a beautiful widow, Omera, played in another good guest role by Julia Jones. Omera takes a shine to The Mandalorian, giving a fairly solid tease of a life wherein The Mandalorian settles on Sorgan, and gives up his life of battle. The fact that The Mandalorian was apparently adopted into the Mandalorian tribe as well, rather than born into it, is also something that makes this prospect all the more tantalizing. Inevitably though, the show quickly abandons the idea of The Mandalorian and/or The Child staying on Sorgan, contriving a bounty hunter somehow finding them, only to get shot from behind by Cara, necessitating that The Mandalorian and The Child head elsewhere at the end of the episode. Well, that was all too predictable.

Before that though, we do get a pretty decent action scene for this episode’s climax, even if it’s another action scene that’s shot in the dark, presumably to mask some less-than-stellar special effects in what’s otherwise a remarkably well-produced Disney+ series. The villagers end up fighting off the bandits here, while The Mandalorian and Cara try to work together and lure the AT-ST into a pond trap. After the AT-ST stops before the trap though, Cara decides to try and lure it forward, having to jump into the pond, and shoot at the walker. In the process, she ends up hitting one of its ‘eyes’, which seemingly blinds it, and leads to it stepping into the pond, at which point The Mandalorian jumps on top of its side, tosses a grenade into it, and the entire AT-ST is destroyed. Like I said, for a supposedly indestructible Imperial machine, The Mandalorian and Cara actually brought the AT-ST down in a fairly straightforward way, making their initial hesitation come off as inexplicable cowardice, against a threat that clearly had a very noticeable weakness, namely from the vulnerable ‘eye’ windows and side entrance. 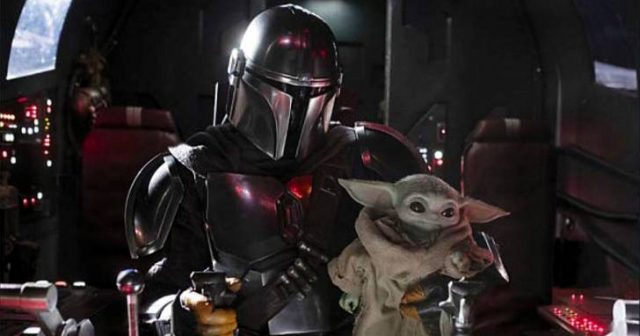 Considering the hot streak that most of The Mandalorian has been on so far, it’s a little disappointing to see the show’s writing suffer in the attempt to change up the format. “Chapter 4: Sanctuary” certainly isn’t a bad episode for the series, but it’s the weakest episode so far, one that isn’t really able to make a fully satisfying standalone adventure for The Mandalorian and The Child, at a mere 40-minute runtime. Still, Gina Carano’s guest stint as Cara Dune is pretty great, and I hope that she shows up again at some other point in the series’ future, which the end of this episode does seem to hint at, when Cara and The Mandalorian reference their paths eventually crossing again. For now though, it looks like trouble is going to find The Mandalorian and The Child no matter where they go, so I don’t see the point in teasing The Mandalorian giving up his heritage, nor his call to battle, after this. Because of that, maybe the series should go back to its darker, more thriller-esque tone, even though I wouldn’t mind a new ‘setting-of-the-week’ format to balance that out either.