After trying and failing to confront Lyla during the previous episode of Arrow, Oliver, Laurel and Diggle all end up incapacitated, with Oliver eventually waking up on his apartment couch. All is not as it seems though, as Oliver is apparently invited to a city council fundraiser, wherein he runs into none other than Quentin Lance! Somehow, reality itself has changed again, with, “Reset” allowing Paul Blackthorne to return for a guest stint, a la several other legacy Arrow actors this season, namely in serving as the key means through which the Monitor must teach Oliver his latest lesson, before the arrival of the Crisis.

There are no other storylines in this episode either. All of the plotting focuses entirely on Oliver constantly trying and failing to save Quentin, who is killed after being called to a hostage situation at the SCPD. Eventually, Laurel also shows up top, being the only other person that’s aware that she and Oliver are stuck in a time loop. It turns out that even Diggle is unaware of this situation to boot, with Oliver and Laurel having to face some unspecified test, before they can proceed forward with their pre-Crisis on Infinite Earths tasks. The test appears to be related to Quentin as well, since every time Quentin dies, the time loop resets, with Oliver waking up in his apartment, while Laurel wakes up in the bunker. 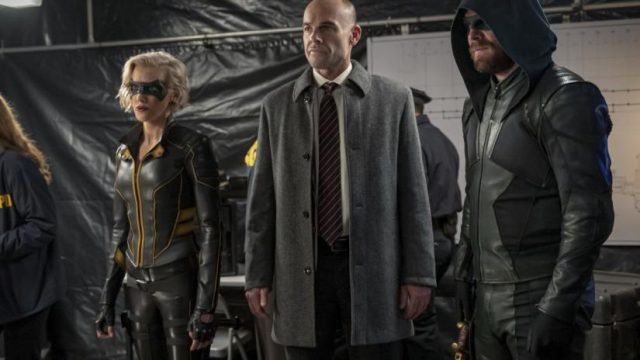 The entire first half of this episode thus involves Oliver and Laurel working together to try and save Quentin, finding hidden bombs, avoiding hidden shooters, and yet always failing to save Quentin in the end, every time. Even when Oliver, Laurel and Quentin apparently find out who’s responsible for the mysterious assassination attempts on Quentin, Lyla simply intervenes with another bomb, saying that Oliver and Laurel are missing the point of the time loop. Lyla is then removed from the false reality after the next reset, which eventually leaves Oliver and Laurel having to fumble through the puzzle without any additional help, all the while believing that Lyla and the Monitor are punishing them for their former treachery.

Inevitably, Laurel is the first to break as well, eventually capitulating to being unable to save Quentin during one of the loops, and taking the opportunity to say goodbye to him, and tell Quentin what he always meant to her. This results in Laurel disappearing from the next reset, merely leaving Oliver to solve the puzzle of how to save Quentin on his own. Inevitably though, Oliver can’t save Quentin at all, with even Quentin being all too ready to accept his fate. This forces Oliver to learn the hard lesson that, no matter how hard he wants to fight, and how much he’s willing to push through seemingly impossible circumstances, there is no changing his ultimate fate during the coming Crisis. This is a little predictable, with viewers no doubt probably being able to deduce from the get-go that this is what Oliver and Laurel must learn to do. Despite that though, the execution of the time loop, and the emotional final goodbye for Quentin, are all done incredibly well throughout this episode. 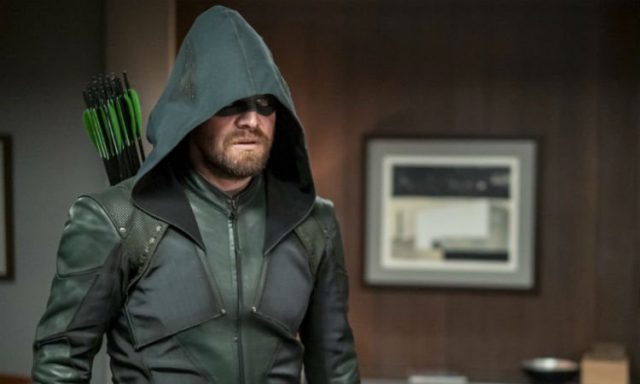 This is especially important when you recall what a lame exit Quentin formerly had from Arrow at the end of Season Six. Considering how longstanding a character he was on the show, it was a bit frustrating that Quentin died off-screen from a gunshot wound, without much of a real sense of buildup or drama. This episode finally gives Quentin the victory lap exit that he deserves, with Laurel finally fessing up to exactly how much she came to love her father’s Earth-1 doppelganger, while Oliver finally learned to forgive himself, and accept the fact that there was no saving Quentin when he died a couple of years ago. Having finally realized this, Oliver and Laurel thus wake up in another new destination, with Mia, William, Connor and Diggle all nearby as well. It turns out that all of them have been placed on Lian Yu for Team Arrow’s final pre-Crisis mission, and that’s inevitably going to be detailed during next week’s midseason finale for Arrow proper.

As much as longstanding Arrowverse followers may be tempted to gripe about the fact that the Arrowverse has utilized a time loop plot device before, namely during the third season of Legends of Tomorrow with Zari Tomaz, Arrow found an inspired way to re-tool the idea for itself, and make it feel very emotionally resonant for both Oliver’s and Laurel’s characters. As much as the overall lesson behind accepting the inevitable is rather predictable, “Reset” nonetheless proved to be a clever and emotionally-charged episode of Arrow, while also nicely positioning the bulk of the show’s lead characters on Lian Yu, for next week’s promising midseason finale. Best of all though is the fact that this episode finally gave Quentin Lance a much better, more emotionally gratifying exit from the show, thus fixing one of the biggest issues with Arrow’s rather weak sixth season. All that’s left to explore now is the deadly island that started it all for Team Arrow, where Oliver will have to confront his past one last time, before the battle for the Multiverse’s future immediately follows it.