The coming Crisis is now just a couple of days away for the Arrowverse, at least according to The Flash’s current timeline (it’s a couple of weeks away in real-world time), and that leaves room for an ambitious two-part midseason finale for the series, kicking off the 2019 climax for The Flash proper a week earlier than the other currently-airing Arrowverse shows. “The Last Temptation of Barry Allen, Pt. 1” picks up immediately after the shocking conclusion of the previous episode, which saw a fully-mutated Ramsey ambush Ralph on top of a building, resulting in a quick confrontation between the two. Ralph manages to hold Ramsey off, but not before Ramsey successfully infects Ralph with his tainted blood, resulting in Barry having to give Ralph an emergency transfusion to save his life.

Ralph ends up being stabilized by Barry’s blood donation, but this process also ends up having very dire consequences for Barry. It turns out that the temporary contact with Ramsey’s blood infection simply passed the affliction onto Barry, which was likely Ramsey’s plan all along, in a rather clever bait-and-switch. Through infecting Barry, Ramsey is thus able to trap him in a psychologically twisted dream state, while also using the opportunity to read Barry’s memories, in turn learning that Barry is The Flash, and that a Crisis is coming to Earth-1 in a matter of days. Now having full knowledge of Barry’s certain death during the Crisis then, Ramsey decides to tempt Barry with the ability to both stop the Crisis and save his life, at the cost of submitting to Ramsey’s blood-controlled influence. 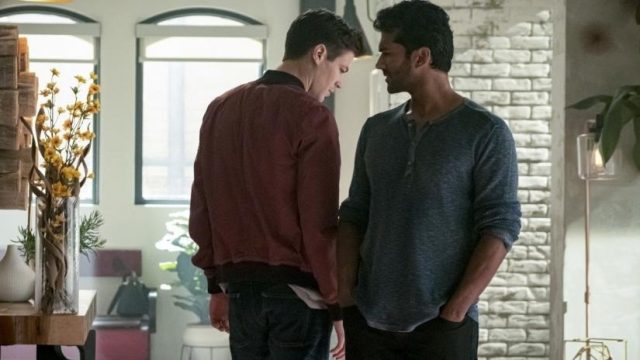 This is a really cool storyline to sustain a midseason finale for The Flash, even spread across two episodes in this case. Barry has to fight Ramsey’s torments and temptations within his own mind, cut off from the rest of Team Flash, and with only the petitions of the Speed Force to stay on his path as a guide. The Speed Force once again takes the form of Barry’s late mother, Nora on this note, trying to convince Barry that Ramsey is tricking him, and merely wants Barry’s form to wield as his puppet. This potent temptation and likely treachery from Ramsey really is a great turn, one that nicely keeps the core storyline of this episode engaging, especially when Ramsey reminds Barry that he’d be sacrificing his future daughter all over again, and can avert future deaths, with the power to not only allow The Flash to survive, but also to give life to any innocents that die. Hell, Ramsey even cruelly reminds Barry of all the people he lost during his current career as The Flash, even laying the deaths of Leonard Snart and Martin Stein at his feet, which is especially underhanded, considering that those characters died on Legends of Tomorrow!

The increasing unpredictability and aggression of Ramsey’s infection eventually comes to a head, when a medical watch finally alerts Cisco and Frost to the unconscious Barry, which results in Frost freezing (pun not intended), while Cisco races to inject Barry with the Velocity-X drug, giving him enough strength to seemingly resist and overcome Ramsey’s infection. This is a satisfying result, though the fact that Frost couldn’t just call Caitlin out feels rather contrived and unrealistic, especially when Frost does exactly that when Ralph is injured during the start of this very episode! I guess it’s supposed to be a transparent excuse to switch between Frost and Caitlin in future, rather than keep Frost out all the time now, but why does this even have to be an issue? Regardless, all seems well after Barry’s recovery, despite Frost seizing up during the emergency, but there was one last great twist in this episode’s core storyline, namely that Barry didn’t actually prevail against the infection, and that Ramsey now successfully controls The Flash! That’s a pretty awesome cliffhanger, very nicely leading into the conclusion to this two-part storyline that’s set to air next week.

Outside of the core storyline with Barry, there was another key storyline in this episode, which seems to tease a new villain development for Season Six’s back portion in 2020. For now though, there’s disappointingly little payoff to it. After Allegra tries to confront Iris about her struggle with preparing an obituary for Barry, now that Allegra knows that Barry is The Flash, Iris insists on investigating the mysterious company that appears to have been affiliated with crime lord, Remington Meister, from The Flash’s previous episode. After coming up with a dead end initially, only being given a business card for a mysterious company called ‘Maelstrom’ (there is a character called ‘Maelstrom’ in DC Comics lore, but they’re one of the New Gods, who appear to be off-limits to the Arrowverse, so I doubt this company has any relation to the DC Comics character of the same name), the lead that Iris and Allegra attempted to interview ends up dying in an explosion, which is around the point that Allegra tries to inspire Iris to finish the article about The Flash’s disappearance. This is kind of a touching development for Iris, but it probably also should have been left for the next episode, especially when this entire subplot feels like a mere tease for The Flash’s upcoming post-Crisis on Infinite Earths episodes in 2020.

It’s a shame that everything outside of Barry’s core conflict feels like a bust in, “The Last Temptation of Barry Allen, Pt. 1”, but the overall struggle for Barry is nonetheless pretty great, especially when it ends with Barry succumbing to Ramsey’s influence, and seemingly becoming an evil version of his superhero self, barely a day before the Crisis occurs. Obviously, Barry’s going to be fine before the Crisis actually arrives, which does somewhat deflate the stakes behind Barry’s turn to the dark side, but it will still be interesting to see exactly how Team Flash helps Barry ultimately resist Ramsey for good. I suppose then that, even if this wasn’t the strongest episode of The Flash’s much-improved sixth season at this point, it could still be retroactively made better, if this decisive story conflict for Barry manages to deliver a strong second half next week. Time’s rapidly running out for Team Flash though, and with two of their best superheroes now incapacitated, the remnants of the team will have to work overtime to make sure that they’re unified and ready, before all of Earth-1 ends up at stake, and thensome!