You can’t have a final season full of nostalgic plot throwbacks without eventually going back to where it all started. It’s kind of amazing that it took Arrow this long to revisit Lian Yu in its final batch of episodes, where Oliver’s fateful journey began all the way back in 2012 (or 2007 in Arrowverse time, if you count when the Queen’s Gambit first went down), but the show’s midseason finale finally goes all the way back to the Season One flashbacks on the island. “Purgatory” brings Team Arrow to the island alongside Oliver himself, but even then, the team has their hands full, after Lyla tasks everyone with building a mysterious weapon, mere hours before the Crisis begins. That’s not the only challenge that the team has to contend with either, after mysterious energy readings on the island end up resurrecting several ‘old friends’ of Oliver’s!

On the one hand, this is yet another strong midseason finale for the Arrowverse, which has been consistently crushing it this week, after The Flash, Supergirl and even Batwoman delivered equally strong midseason finales! That said though, the storytelling does have to start falling back on some contrivances to keep up the nostalgic direction here, since barely any time is left before the events of the Crisis on Infinite Earths crossover starts unfolding, plus Team Arrow has to face some sort of resistance on what should otherwise be a bombed-out, fully dead island. The show hand-waves Prometheus’ destruction of Lian Yu at the end of Season Five away by saying that some sort of mysterious energy readings are occurring when Team Arrow returns to the island, and that’s the ideal time to both construct the Monitor’s weapon, and prepare for the coming Crisis. 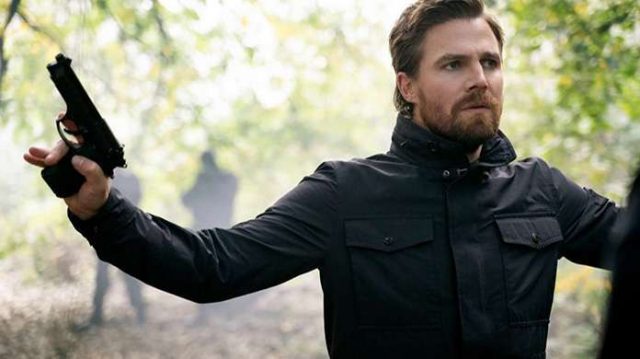 Needless to say, this whole, “Mysterious energy readings” claim feels like it was pulled out of the show’s ass, simply because it needed an excuse to revitalize Lian Yu, after the Season Five finale wrote Arrow into a bit of a corner there. Once you get past that though, the rest of the storytelling in this episode is pretty awesome, providing equal doses of thrilling action and riveting drama. Oliver continues to face down his inevitable fate during the Crisis, most notably, something that also has William and Mia processing the revelation of Oliver’s supposed death in different ways, now that they finally know about it. At the same time, after Lyla calls Rene, Dinah and Roy to the island (apparently, Dinah is able to fly planes. Huh.), the resurrected Lian Yu enemies shoot them down with a missile, which was apparently also conjured, alongside other weapons. This leaves Roy in a very dire situation, after Diggle, Lyla and Connor manage to track him down from the plane wreckage, specifically that Roy’s arm has been pinned under plane debris. If you’re an avid DC Comics fan, you probably know what will happen next, and sure enough, Roy has to have his arm amputated to get free! Roy also lost an arm in the printed panels at one point, and his arm loss once again proves that the Arrowverse’s timeline has been changed, meaning that the initial future of Mia’s, William’s and Connor’s time has now been altered to some extent. For now though, we still have one last mission on Lian Yu to get through.

Initially, this midseason finale’s storyline sets off in a two-pronged direction, with Oliver and Laurel going to find the plutonium that fell from the plane, while Diggle, Lyla and Connor all go to rescue the other team members. Laurel manages to find and take back the plutonium without incident, but Oliver nonetheless runs afoul of several mercenaries that have re-appeared on the island, headed up by none other than Billy Wintergreen and Edward Fyers! This was another really awesome throwback, going all the way to the origins of Arrow’s former flashbacks, namely when Oliver spent his first year on Lian Yu, in conflict with Fyers and Wintergreen. Even as Oliver initially fends off his attackers as well, he’s soon after reunited with another familiar face, Yao Fei! As another ghost mysteriously resurrected on the island, Yao Fei decides to help Oliver again, encouraging him to find his patience, and be there for his family, even when Oliver is initially determined to kill a series of foes that are already dead.

Again, the weird energy readings on Lian Yu have a few holes in them, most notably because Shado and Samantha don’t return here, despite the fact that they also died on Lian Yu. Hell, Samantha not returning is an especially huge missed opportunity here, considering that the adult William is on Lian Yu with Oliver and everyone else! Maybe the showrunners just couldn’t get the actresses to come back, even for a one-off guest stint, but it’s disappointing all the same. Regardless though, after Yao Fei eventually leads Oliver back to his teammates, there’s a pretty cool climactic fight sequence with Fyers’ mercenary company, as Team Arrow tries to buy time for William to complete the Monitor’s mysterious weapon, which apparently requires a DNA signature to activate. After Oliver’s DNA doesn’t work as well, it’s soon after determined that it’s actually Lyla who needs to activate the weapon. Once Lyla does so, she walks away into a portal, having gone to some unknown destination.

The successful weapon activation appears to dispel the Lian Yu ghosts, even if Lyla’s MIA, and this is a good chance to round off the episode with some wonderfully emotional and dramatic conversations, particularly between Oliver and Mia, and Oliver and Diggle. This acknowledgement of Oliver facing his end, and how this affects both sides of his legacy, is once again done superbly in these character-driven sequences, which really provide a ton of added dramatic weight to the coming Crisis, since Oliver’s chances of survival are a lot lower than, say, Barry Allen’s over on The Flash. After Oliver and Mia make their peace with the situation however, Lyla returns, now in Monitor-esque garb, just in time for the skies to turn red. Now re-christened as, “Harbinger”, fulfilling Lyla’s connection to her original DC Comics identity, Lyla declares that the Crisis has begun. How Lyla found the time to do this, and still allegedly sort out Barry’s villain situation on The Flash this week, I don’t know, but regardless, the Crisis is here, so no sense dwelling on narrative/timeline nitpicks. 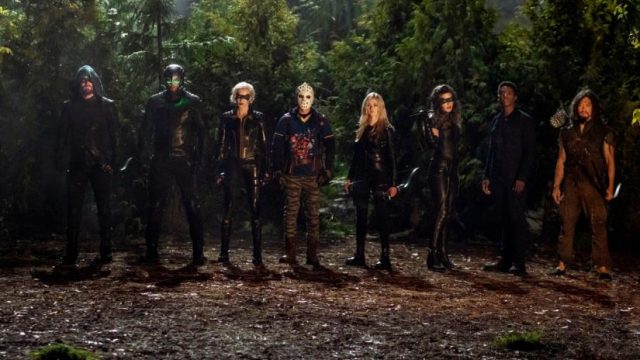 “Purgatory” missed a few character opportunities, and had to strain pretty hard to make its premise work, but if you can forgive having to stretch your belief especially far for Arrow standards, you’ll nonetheless find another wonderfully gripping and dramatic episode here, concluding Arrow’s 2019 run on a healthy note. The show’s midseason finale once again did a sublime job of building up to Crisis on Infinite Earths, acknowledging Arrow’s past events, and laying the groundwork for an uncertain future surrounding Mia’s new Team Arrow of the 2040’s, all at the same time. The reunion with Yao Fei was very heartwarming while it lasted too, as were the final conversations shared between Oliver and his various teammates, right before the Crisis finally makes it to Earth-1. Almost all of The CW’s currently-airing DC shows have universally managed to deliver some awesome lead-ins to Crisis on Infinite Earths this week (Black Lightning, while not technically linked with the Arrowverse quite yet, has its midseason finale scheduled to air next week), but like I said, the stakes feel highest for Arrow, since we know that the show is ending next month, leaving Oliver and his team most at risk of perishing in the coming battle against the Anti-Monitor. Still, the Crisis has arrived all the same during the closing seconds of this episode, priming Oliver to make his final stand for the good of the Multiverse, now that he’s finished reconciling his past for the final time.