HBO’s tech-themed sitcom, Silicon Valley finally comes to an end with this week’s series finale, “Exit Event”, an episode that creatively alters the show’s format for its last hurrah. Unfolding over an extended 45-minute runtime, “Exit Event” incorporates a reunion/mockumentary style into its storytelling, beginning with a jump to ten years in the future, wherein Richard and the Pied Piper employees talk about the launch of their revolutionary decentralized internet platform. It starts out optimistic, empowering and bold, but as the episode goes on, it becomes clear that something has ultimately destroyed Pied Piper in the time since Silicon Valley’s proper events, and that something is a surprising thing indeed.

This final episode for Silicon Valley is thus far more bittersweet than many viewers might no doubt expect, or hope for. Seeing the characters reunite after going their separate ways in the wake of Pied Piper’s collapse, at least for the most part, is fairly heartwarming, especially when we see them still do things like the ‘Always Blue’ game. This also has to be framed around a surprising inversion of the show’s usual season climax formula however, namely the fact that it was Richard’s own think tank, Silicon Valley’s own leads, that destroyed Pied Piper in the end, willingly, and with extreme prejudice. There’s a tragic irony there, but one that works very well from a narrative standpoint, essentially amounting to Pied Piper’s new internet idea being destroyed not because it didn’t work, but because it worked too well. 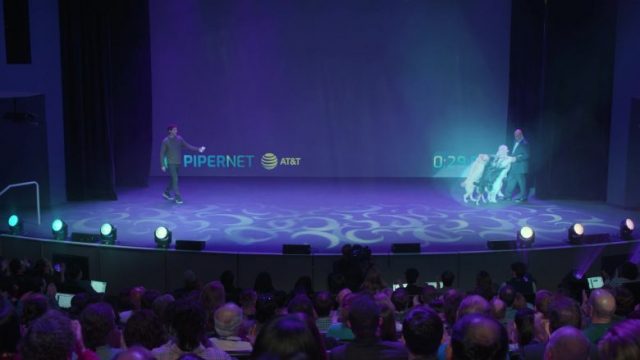 Like I said, this cleverly inverts the usual climax trope of Silicon Valley, namely Richard and his team pulling out some crazy last resort, which ends up saving their company and their ideas. In this case however, after a seemingly benign text gaffe from Monica’s phone signals that the Pied Piper A.I. is shrinking files at such a rate that encryption is essentially obsolete, Richard and his executives realize the terrible truth; Everything from world secrets to nuclear launch codes will now be freely accessible to anyone, essentially resulting in the collapse of society. This has Richard in particular once again struggling with an ethical stance on whether to take the money and make his tech someone else’s problem, though ultimately, everyone capitulates to the reality that the Pied Piper app launch needs to fail, very publicly, and very badly. That is, of course, except for Dinesh, who insists on being barred from the launch event, since he will inevitably compromise the deliberate failure, because he wants money and fame.

This finally gives Dinesh a truly excellent storyline for Silicon Valley’s final season, right at the finish line. After Gabe ends up reversing Gilfoyle’s sabotage of the data transfer, Dinesh finds that his own countermeasures against himself have barred him from stopping the now-undeterred launch of Pied Piper’s new internet platform, necessitating that he run to the roof of the convention centre, in an effort to warn Gilfoyle and Richard. Even this turns out to be amusingly futile however, since Dinesh’s efforts fail to prevent the noise from being blocked… That is, until the ultrasonic frequency generated by the app use ends up attracting rats from all over the city! Yes, this is ridiculous, but some things truly are stranger than fiction in the real tech world, so it feels oddly fitting that Pied Piper would bring the fairy tale that inspired its name to horrifying life, as rats begin to pour out from everywhere that the app is in use.

Again, this cleverly inverts the show’s usual formula, involving an attempt to fail that failed, only for that failed attempt to create another, equally reliable failure, which once again changes tech, in the opposite direction. It appears then that everything eventually finds balance, and with no AT&T deal left to save, Pied Piper is dissolved, and its tech is dismantled. Clearly, this won’t be the result that every viewer wants for Silicon Valley’s final episode, but it wasn’t really what Pied Piper wanted either. In the end though, Richard and his friends can at least rest assured that they did make the world a better place, by ironically saving it from their own out-of-control technology. They were too successful, and that’s why they had to destroy everything. It’s initially sad, but also kind of uplifting in a strange way, seeing that Richard and his management team ultimately did the right thing, rather than allow the world to fall apart, simply because they wanted to be rich and famous.

This just leaves the final resolutions for each character, which are chronicled by the fictional documentary crew, ten years after Pied Piper’s collapse in present-day 2019. Some of these are really great too, such as Dinesh and Gilfoyle going into business together, and living in adjacent houses (despite still claiming to hate each other), Monica moving to Washington and working for the NSA, and Laurie being in jail for unspecified reasons, which is pretty damn funny. Not every resolution is a winner though. Some key characters are left hanging, most notably Mia, Dinesh’s hacker girlfriend that vowed revenge on him (albeit indirectly), as well as Ron, whose lack of a payoff is a big missed opportunity. Richard going to work for Gavin’s educational institution as a tech professor also feels rather weak, since Richard and Gavin seemingly buried the hatchet off-screen, which is certainly a lame way to end Silicon Valley’s core rivalry. We also don’t see the long-lost Erlich make a re-appearance, and his whereabouts remain completely unknown, likely because T.J. Miller has firmly burned his bridges with HBO at this point. Erlich is at least mentioned though, namely in another much better payoff, when we see that Jian-Yang has moved to Vietnam, and stolen Erlich’s identity, so he can begin a new tech pirating empire. That’s another resolution that feels all too fitting, as does Jian-Yang taking the old incubator away from Big Head (before Jian-Yang fakes his death and goes to Vietnam), who nonetheless becomes president of Stanford University, despite not even knowing how the name is pronounced.

This final episode ending as Richard misplaces the old source code for the Pied Piper platform is far more darkly satisfying than Richard simply going to work for Gavin’s ‘tethics’ initiative, especially since it helps to distract from the fact that Gavin blocking Pied Piper’s old Hooli merger, as well as opening an investigation into Richard’s company, ultimately ended up being a completely pointless non-conflict. Outside of the handful of unsatisfying resolutions however, Silicon Valley still smartly subverts expectations in its final episode, while remaining strangely and ironically true to the show’s usual comedic formula. This final episode offers a lot of smart storytelling, along with some very clever jokes, presenting an ultimately tragic downfall for Pied Piper, but one that still carries a happy ending with it. In the end, Richard’s team put the world before themselves, and perhaps that was the lesson behind the show’s satire of modern tech culture all along. A lot of people are in Silicon Valley to get rich, but if your prosperity comes at the world’s expense, perhaps it isn’t worth it. Thus, even if Richard and the Pied Piper team didn’t get the result they hoped for, they still, in their own way, managed to make the world a better place, and that’s a kind of satisfaction that money truly can’t buy.

Silicon Valley Series Finale: "Exit Event" Review
Silicon Valley's final episode is bittersweet, but nonetheless satisfying, as Richard and his friends are forced to destroy their creation for the good of mankind.
THE GOOD STUFF
THE NOT-SO-GOOD STUFF
2019-12-09
90%Overall Score
Reader Rating: (0 Votes)
0%