After reviving the fan-favourite Young Justice animated series earlier this year, the DC Universe streaming platform is now debuting its first-ever original animated series, Harley Quinn. The wait for this new DC Universe show isn’t nearly as long for us Canadians as well, with new episodes being staggered by only nine days for Canada, rather than weeks or months, wherein they air on the Canadian Adult Swim channel, on Sunday nights. It’s a good thing that the wait for Harley Quinn in Canada is much shorter than the previous belated Canadian airings of Doom Patrol and Swamp Thing as well, since Harley Quinn looks to be another outstanding hit for the DC Universe platform, presenting a proudly violent, foul-mouthed cartoon series for adult DC enthusiasts.

This is a series that very intimately understands its title character, and that’s apparent right from the first scene of this debut episode, when Harley corners some haughty rich folks on a boat. It turns out that the boat’s captain is also Joker in disguise, who eventually reveals himself, only to upstage Harley’s efforts to, “Be the muscle.” After Batman subsequently intervenes as well, Joker flees, promising to break Harley out from Arkham Asylum. Harley is then predictably uncooperative with a hilariously unstable Commissioner Gordon soon afterward, resulting in her indeed having to go to Arkham, believing that the Joker will come for her. Then, a whole year passes, in an amusing montage of sequences that sees all of the Arkham super-villains getting annoyed at Harley’s Joker obsession, though only one, Poison Ivy, resolves to actually do something about it.

This cements Poison Ivy as the co-lead of Harley Quinn, and the comedic chemistry between Kaley Cuoco’s Harley and Lake Bell’s Ivy is pretty damn fantastic. This show’s entire voice cast is pretty amazing in fact, with Diedrich Bader reprising his animated Batman role from Batman: The Brave and the Bold most notably, Chris Meloni playing an unhinged, manic Commissioner Gordon, Jim Rash debuting an extra comical and flamboyant take on the Riddler, and Alan Tudyk portraying the Joker, after also playing the lead villain role in a previous DC Universe original series, Doom Patrol. There’s not a single weak link among the characters of Harley Quinn, despite the huge size of this first episode’s character ensemble, and all of them are voiced with a wonderful sense of twisted energy. This is especially true for Cuoco, who absolutely throws herself into the role of Harley with incredible conviction, perfectly capturing both the best and worst of Harley’s co-dependent, yet naively optimistic psychology.

Of course, it also helps that Harley Quinn’s writing is frequently hilarious to boot. Whether it’s Poison Ivy having a sentient carnivorous plant roommate named Frank (voiced in another standout turn by J.B. Smoove), Harley commenting on how obvious the super-villains’ lairs are, or Ivy substituting an acid trap with gallons of margarita mix just to make a point, Harley Quinn combines sharp writing with awesome delivery from the voice actors, creating a gut-busting series of set pieces and jokes that will have Batman/DC fans in particular doubled over. Even if you’re not a Batman/DC fan, and barely know anything about these characters, Harley Quinn is still very funny, with the writing pretty much never relying on a knowledge of Batman/DC lore in order to get laughs, at least in this first episode. Even if this is your first time seeing Harley Quinn in action, you’re bound to appreciate the character’s storytelling and sense of humour, which this new animated series perfectly lays out, and captures to a tee, right from the jump. 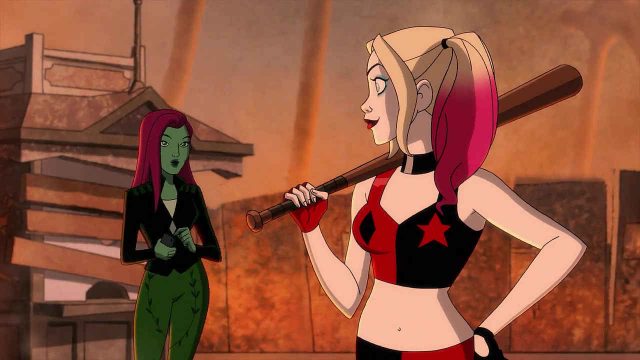 The other big identifier in Harley Quinn is how gleefully violent it is. This is definitely not a DC cartoon for children, since characters are shot up, stabbed, melted, skinned, devoured and regurgitated, have body parts chewed off, get blown up, and have their arms and legs violently broken, with visible bone, and all with big spatters of blood and viscera, all in this first episode alone! Sometimes, this can be pretty damn funny too, such as when Joker casually puts a bomb in a henchman in order to send a message to Harley, or when Harley shatters the leg of someone who mocks her, only to wait until he stops screaming and goes into shock, so she can keep talking. The only slightly uneven element to the violence is in the actual action scenes, which range a bit in their execution. Some of them are consistent, and all of them are pretty enjoyable, but Harley Quinn hasn’t quite settled on a consistent feel to its action scenes yet. Some are more stylized, others are played straight, and some have weird flourishes that don’t mesh with the rest of the animation. Maybe the idea is to be a little unpredictable, but for now, the action scenes aren’t quite as brilliantly consistent as the humour is.

That’s a pretty small gripe for what’s otherwise a truly stellar adult cartoon though. Harley Quinn is a very funny, very clever new series to come out of the surprisingly brilliant catalogue of original DC Universe shows, one that’s both a great show about the character of Harley Quinn herself, as well as a great cartoon about fighting for yourself in general, even when the rest of the world doesn’t take you seriously. To that end, Harley fully dumps the Joker at the end of the episode, after roughing up several of his goons, and leaving Joker alive, so he can witness her rise to villainous stardom. Thus, the journey from here will no doubt explore how Harley means to become a serious, independent villain, with some help from her new best friend, Poison Ivy. It’s a simple premise, but one that nonetheless lends itself to all sorts of potent, crazy humour, complete with a curse-filled, violent presentation that makes Harley Quinn an absolute delight for adult viewers looking for something pretty irreverent, and you don’t even need to be an established Batman/DC fan to enjoy it!