Watchmen is starting to approach its first season’s endgame, and while the season finale is next week, it looks like the show’s penultimate Season One episode is giving us plenty to look forward to! “A God Walks into A Bar” spans its entire runtime around a flashback within other flashbacks within present-day events, in a clever sort of window into the relativistic nature through which Dr. Manhattan perceives time. This of course builds off of the shocking twist from the conclusion of last week’s episode, wherein it was revealed that Angela’s husband, Cal was actually Dr. Manhattan in disguise the whole time, and Angela has now ‘woken him up’, in response to the Seventh Kavalry and Lady Trieu now having a bead on him.

On top of this latest creative story direction for HBO’s Watchmen series, “A God Walks into A Bar” also deals with the idea of inevitability, and how one constantly struggles against a seemingly pre-determined outcome. This once again beautifully calls back to the original Watchmen graphic novel, which had the inevitability of destruction by nuclear war persistently hanging over its 1985 setting, before Adrian Veidt/Ozymandias averted that catastrophe with, ironically, another catastrophe, albeit one that only killed millions, rather than billions. The present-day events of HBO’s Watchmen series are fittingly staring down a tragedy of global implications as well, with the Seventh Kavalry having come to claim Dr. Manhattan, as the final step in Joe Keene Jr.’s plan to become the, “Next Dr. Manhattan.” 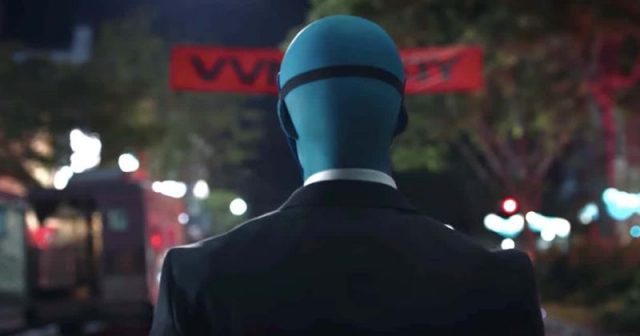 The ingenious framing of the episode constantly feels both rewarding and engaging, making, “A God Walks into A Bar” another big highlight episode for Watchmen’s debut season. It begins with Angela observing the anniversary of her parents’ death in Vietnam, during the Dr. Manhattan celebration festival, only to be visited by a man in a Dr. Manhattan mask, who is entirely blue. Initially, this man doesn’t stand out, since many people are covered in blue makeup, and wearing Dr. Manhattan masks. The man eventually talks Angela into accepting his company though, at which point he recounts, or perhaps predicts, the fact that they will fall in love, be in a relationship for ten years, and then tragedy will strike, ending the relationship. This wonderfully complements the fact that audiences now know that tragedy does indeed strike in 2019 as well, when the Seventh Kavalry comes for Dr. Manhattan, necessitating that ‘Cal’ be killed. For now though, a curious Angela wants to hear out the stranger, whom audiences would obviously already know to be the real Dr. Manhattan.

On top of filling out the obvious questions surrounding how Angela was hiding Dr. Manhattan as her husband for a decade, with no one knowing, this sublime episode also takes the opportunity to bring the final pieces of the season’s mystery into place, providing an excellent foundation for next week’s season finale. We see how Angela does indeed come to love Dr. Manhattan, presenting the solution through which he hides among ordinary people, namely by masquerading as a dead body with no next of kin, which is scheduled to be cremated the next day. The persona of ‘Cal’ is chosen from four options, and for six months, things are great, until, as Dr. Manhattan says in the bar, he and Angela have a fight over his constant knowledge of the future, completely removing spontaneity from the relationship. This has Dr. Manhattan going to see Veidt, filling in more essential pieces to the puzzle of the season.

It was inevitable that Dr. Manhattan would have had something to do with Veidt’s exile to Europa, where Veidt now lives in a supposed paradise, created by Dr. Manhattan. We also learn that the paradise was meant to be a way to ease Veidt’s desire to be needed by the world, who keep making the same mistakes, even as Veidt keeps trying to tip them off to renewable energy, and ways to make war obsolete. It turns out as well, in another awesome twist, that the many incarnations of Mr. Phillips and Ms. Crookshanks are modeled after a noble couple that Jon accidentally saw preparing to have sex as a child, when he was hiding with his father from Nazi persecution in the couple’s estate, another clever parallel to present-day events on the show. The manor is also warped from Earth, directly to Europa, as a home for Veidt, and the clones, who were made to be the, “Adam and Eve” of Dr. Manhattan’s new paradise. This excellently flips the conflict of Veidt on its ear, because, despite likely audience supposition that Veidt has been ‘imprisoned’ for his crimes at the end of the original Watchmen graphic novel, it turns out that he’s actually been given a great gift, a gift that he is no longer content with, and now longs to escape. It’s ironic, it’s clever, and it’s very, very cool. Hell, the episode even has a post-credits scene, on this note, wherein the Game Warden presents Veidt with a cake, containing a horseshoe, which he then uses to try and escape a prison cell. Thus, even Veidt should get a pretty awesome payoff next week!

Where the amazing storytelling really comes to a fantastic head though is, naturally, towards the end of the present-day events, when Dr. Manhattan is brought back out from Cal’s form. It turns out that Angela took a hammer to Cal’s head in order to rip out the device from Veidt, which disables Dr. Manhattan’s memory, and knowledge of his true identity and powers. It also turns out that Cal’s Dr. Manhattan powers really did save Angela during the White Night, as some fans predicted, since they could still be activated as a life-saving reflex. Regardless, after Dr. Manhattan warps the children away, having a conversation with Will about this matter before he gave up his memory ten years ago, Angela tries to battle the Seventh Kavalry agents outside, in an attempt to save Dr. Manhattan, and initially appears to succeed. Inevitably though, Dr. Manhattan is captured anyway, being forcibly teleported away by a tachyon cannon, leaving Angela’s efforts completely in vain. This of course precedes Angela agreeing to the initial date with the disguised Dr. Manhattan in the bar ten years prior, which ends the episode, in a masterful conclusion. 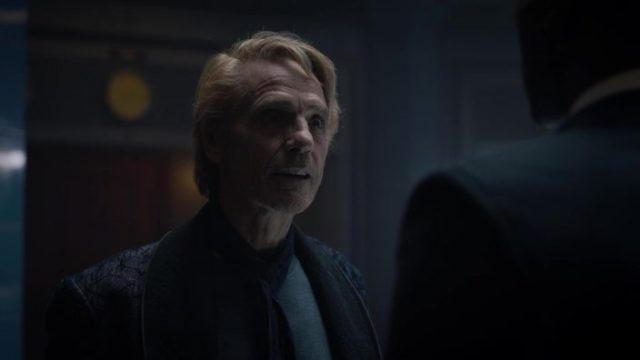 If you’ve been keeping up with all of the metaphysical talk, you’ll also no doubt notice another layer of irony before Angela realizes it herself, namely that she’s actually responsible for setting all of the show’s events into motion, through asking about her grandfather in the present, which ironically contributes to a conversation with Will from the past, tipping Will off to Judd Crawford and his Klu Klux Klan robe, thereby setting off the show’s entire mystery. If ever you needed true proof that HBO’s Watchmen series is just as brilliant as its graphic novel inspiration, it’s this episode. Everything came together perfectly here, between the remaining questions surrounding the show’s overall mystery, Angela’s part in events, the explanation behind Dr. Manhattan’s role as Angela’s husband, how Dr. Manhattan comes to be captured by the Seventh Kavalry, and how Crawford was initially targeted and killed by Will in the first place. This just leaves next week’s season finale, and as exciting as that will be, “A God Walks into A Bar” is going to be one hell of an act to follow! This is quite possibly the season’s best episode yet, and likely one of the best episodes of any superhero show in television history! If Watchmen manages to stick the landing with its season finale next week, it will likely stand alongside Chernobyl as one of the smartest and most memorable HBO shows of the year, and that’s no small feat for a series taking on the impossible task of trying to continue the story from one of the best graphic novels of all time.

Watchmen 1.8: "A God Walks into A Bar" Review
Watchmen delivers a consistently masterful episode throughout, "A God Walks into A Bar", providing the remaining answers to the show's mysteries, while also presenting a brilliant showcase of Dr. Manhattan's relativistic perspective.
THE GOOD STUFF
2019-12-09
98%Overall Score
Reader Rating: (0 Votes)
0%