NOTE: Full spoilers for this episode of, “Supergirl”, including multiple major character deaths, are present in this review

After years of foreshadowing, first beginning with an innocent tease on The Flash during its debut season in 2014, the so-called Crisis on Infinite Earths is now occurring for the Arrowverse. Now that Arrow and The Flash in particular have set the stage for this Crisis throughout this Fall as well, the onus is on Supergirl to properly launch it, despite having practically no buildup to the event, before last week’s midseason finale anyway, when the Monitor confesses to J’onn that he intentionally set Malefic free from the Phantom Zone, in order to purge J’onn’s past demons from Mars. Now that everything is in place however, the Crisis on Infinite Earths crossover event can properly begin, starting with this week’s additional special episode of Supergirl.

DC fans will be tickled right from the jump as well, since the vastness of The CW’s DC Multiverse is given a few very satisfying early Earth cameos during the prologue. These also include some fan-favourite DC actor cameos to boot, such as Robert Wuhl briefly reprising his role as Alexander Knox on Earth-89, which is indicated to be the setting of Tim Burton’s duo of Batman movies (despite retconning the infamous fate of The Joker in its newspaper headline), Alan Ritchson and Curran Walters making a brief appearance as their Titans characters, Hank Hall/Hawk and Jason Todd/Robin, respectively, in turn confirming that the DC Universe streaming service’s much-loved Titans series takes place on Earth-9, and best of all, Burt Ward makes a quick cameo as a seemingly aged/retired Dick Grayson/Robin from the lovably campy 1960’s Batman television series, walking Ace the Bat-Hound no less, which is now confirmed to take place on Earth-66! This nicely expands the scope of Crisis on Infinite Earths well beyond the confines of The CW’s DC programming, and while these nods to other fan-favourite DC properties don’t directly affect the events of The CW’s current crop of DC shows, they do make this crossover feel all the more epic and cool for the DC faithful.

When things actually get going on Supergirl’s Earth-38 however, the entire planet finds itself quaking, as red skies begin to surround it. With Supergirl rushing to the DEO to determine what’s wrong, everyone on Supergirl’s team then learns that the earthquake is on a global scale, just in time for J’onn to also appear, and confirm the existence of the Crisis from his recent chat with the Monitor. With Earth-38 being the next target of the same massive anti-matter wave that wiped out Earth-2 during this past October’s final season premiere for Arrow, Supergirl and her allies have to rush to try and stop it, though don’t notice in time that Argo City is the next settlement on the anti-matter wave’s path! Kara manages to get a message through to Clark and Lois, who in turn manage to send the infant Jonathan away from the planet, in a nicely ironic mirroring of Krypton’s destruction, but alas, Argo City is destroyed mere minutes afterward, with Kara having seemingly lost her cousin.

Thankfully though, Clark and Lois are saved by Lyla at the last second (though Alura, Kara’s mother, is confirmed to have perished with Argo City), with Lyla now solely going by her identity of ‘Harbinger’, who also brings several of Earth-1’s heroes, namely Oliver Queen/Green Arrow I, Mia Smoak/Green Arrow II, Barry Allen/The Flash, Sara Lance/White Canary, Ray Palmer/The Atom and Kate Kane/Batwoman, along to Earth-38 with her. This is when the series of storylines within this first crossover episode properly begin unfolding, with Harbinger tasking the heroes of Earth-1 and Earth-38 with defending a nearby anti-matter-neutralizing tower in National City, while Alex goes to petition Lena to build a transport portal to Earth-1, in case the defense effort fails, and Earth-38’s citizens need to evacuate their universe, an effort that’s also assisted by Nia and J’onn. You can probably see where that’s going, but we’ll get there, of course. 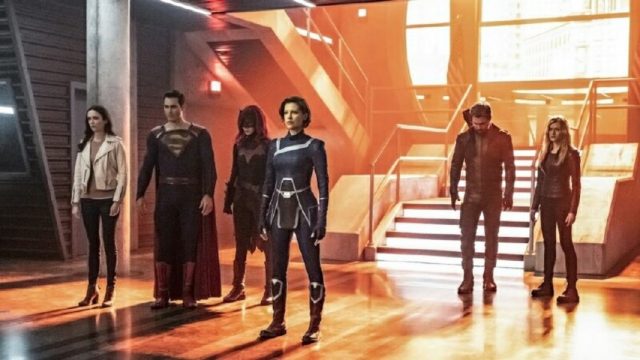 As grand and spectacular as all of these events are, the heroes making an attempted stand on Earth-38 also comes with a good chunk of character material. It seems like the meatiest character interactions are being saved for future Crisis on Infinite Earths episodes though, particularly given this episode’s shocking (well, semi-shocking) twist in the ending. Instead, this crossover opener focuses more heavily on the protection, and eventual evacuation, of Earth-38. Thus, while Kara, Clark and Barry help to prevent damage on the ground, Oliver, Mia, Ray and Kate thus decide to fight the first forces of the Anti-Monitor, the one responsible for the anti-matter wave, within the tower itself. This provides plenty of strong action, while also helping to complete Mia’s evolution into a new Green Arrow, as Oliver presents her with a new outfit, and encourages her to take up his mantle. In fact, despite this being a Supergirl episode, there was a lot of especially heavy material to unpack on the Arrow side, namely by foreshadowing a tragic twist there, even if it’s one that was also set up as early as last year.

A few solid subplots nicely rounded off the main action in the tower as well, particularly as Sara and Brainy accompany Lois to fetch her lost baby, who apparently fell into a wormhole, Mon-El-style, and ended up on Earth-16, circa 2046. This was actually a pretty solid way to resolve the plot hole created from Legends of Tomorrow’s first season, which appeared to show a very-much-alive Oliver continuing to operate as the Green Arrow in Star City, over twenty years in the future. It turns out that the Legends’ view of the future Star City was actually on a different Earth the whole time, an Earth where Sara actually did die when the Queen’s Gambit sank, despite Oliver becoming the Green Arrow of that universe anyway. This not only allows Lois and Brainy to handily retrieve the infant Jonathan, but also allows Sara to provide comfort for the Oliver doppelganger, saying that the fateful night on the Queen’s Gambit made both of them heroes, and provided them both with immense happiness, back on Earth-1. It’s a little thing, but it continues to nicely hammer home that there are very real human stakes behind the coming destruction of Earth-38, and the looming threat over Earth-1.

Alex also delivers some pretty strong material with Lena, despite Lena still being rather antagonistic. Seeing Lena put the fate of Earth-38 and its citizens ahead of personal grudges is pretty great, as is Alex watching out for Lena while she arranges the portal, and it was all the better when Lena reminds Alex afterward that they’re not friends, and that Lena hasn’t forgotten the deception of the people she formerly believed were her friends. This nicely sets up Lena as a continuing antagonist for the back portion of Supergirl’s current season, especially when it’s so very inevitable that the defense of Earth-38 ultimately fails. Despite the heroes’ best efforts, the Monitor declares that the battle for Earth-38 is lost, right before the evacuation ships start going through Lena’s portal, and thus, the Monitor begins warping the heroes away to Earth-1, against their will. Oliver, however, fires an electric arrow at the Monitor, which somehow disables him, in what’s honestly a pretty big stretch, but just as Earth-38 is doomed, Oliver himself also has to make his own final stand in National City. Fighting to the bitter end, to save as many of Earth-38’s citizens as he can, Oliver thus fights until he’s mortally wounded, at which point, the Monitor also brings Oliver back to Earth-1, to join everyone else.

Admittedly, this ending, while dramatically powerful, is also a little clumsy from a narrative standpoint. The Monitor being so easily stunned by a man-made electric arrow is pretty absurd, not to mention that the logistics of the Earth-38 evacuation are a nightmare. Granted, Earth-38 being destroyed in the Crisis is practically inevitable from a real-world perspective, since it means that the Supergirl characters and storylines can now be easily integrated into the Arrowverse’s main Earth-1 setting, making the cast and narrative developments of Supergirl more accessible for mini-crossovers with the other Arrowverse shows. Despite that however, how exactly does one hastily-made portal from Lena evacuate three billion people, including aliens, from Earth-38, and just dump them on Earth-1? Does this mean that literally every other living being in Earth-38’s universe that doesn’t live on Earth is dead? It sure sounds like that. That means that M’Gann and Malefic should logically be dead, since they were on Mars when the anti-matter wave hit. Moreover, if Earth-38 is gone, doesn’t this mean that characters from its future, like the Legion of Super-Heroes and Winn, are also dead? Perhaps the timeline rules also move the Legion of Super-Heroes to Earth-1 now, but even then, this creates a hell of a time paradox with Winn, who went to the future on Earth-38, and should logically still be there, which is to say, he should be erased from existence. This may all end up being addressed in future Arrowverse episodes, but for now, the destruction of Earth-38 raises a lot of big questions, even if it will be nice to finally have the Supergirl characters fully coexisting with the rest of the Arrowverse’s characters on Earth-1.

More immediate and emotional for longtime Arrowverse enthusiasts however is the death of Oliver, which does occur in the final seconds of this episode, with a battered and bloodied Oliver saying his goodbyes to his daughter, and the Arrowverse’s other heroes, before passing away on a table. This is also when we learn that Oliver’s death wasn’t actually a part of the Monitor’s plans, and that Nash Wells is the one who unleashed the Anti-Monitor (which is fairly predictable), and that Nash has now been sentenced as a ‘Pariah’, to watch the Anti-Monitor’s destruction, which is now tearing across many more Earth’s, with Earth-1 supposedly being the last stop. There’s certainly a lot to unpack within this first episode for Crisis on Infinite Earths, but the balance between thrilling action and effective, albeit somewhat hurried character work, makes for a strong kick-off to the Arrowverse’s latest big crossover event. As much as the story’s final turns had to be a bit forced, Oliver’s death really did land with the proper impact, as did the destruction of Earth-38, which finally transplants Supergirl fully into the rest of the Arrowverse’s world. There’s a lot of questions raised by this first Crisis on Infinite Earths episode, but it’s the first episode of five, so there’s still quite a lot to look forward to from here. Fortunately, Crisis on Infinite Earths has hit the ground running in its first offering as well, immediately driving home the stakes behind so much of the live-action DC Multiverse having already been lost.