Doctor Who somehow managed to improve on its already superb high note from the previous week in this week’s episode, seemingly indicating that Series Twelve has fully overcome its brief slump in the second and especially third episode. “Fugitive of the Judoon” is another smash hit offering for the season, not only bringing back another classic race of Doctor Who antagonists, but also presenting a fantastic slow burn mystery that eventually has universal implications. All of this is also exceptionally timed with this being the halfway point for Series Twelve, nicely calling back to the initial mystery with Gallifrey that was kicked off at the beginning of the season, even without needing to bring in The Master this time.

Initially, this episode seems pretty familiar for a Doctor Who mystery, as a part of Earth is once again under threat, when a squadron of Judoon forcibly quarantine Gloucester, England, and demand that the town turn over a mysterious fugitive. Needless to say, The Doctor isn’t having that, so she and her companions slip through the barrier with the TARDIS, and eventually confront the captain of the Judoon. The Doctor buys five minutes after the fugitive is seemingly cornered, with evidence indicating that it’s a man who has lied about his identity to his wife, Ruth Clayton, despite seemingly being fully human. All the while, Graham gets beamed away under mysterious circumstances, with Ryan, Yaz nor The Doctor having any idea where he went. 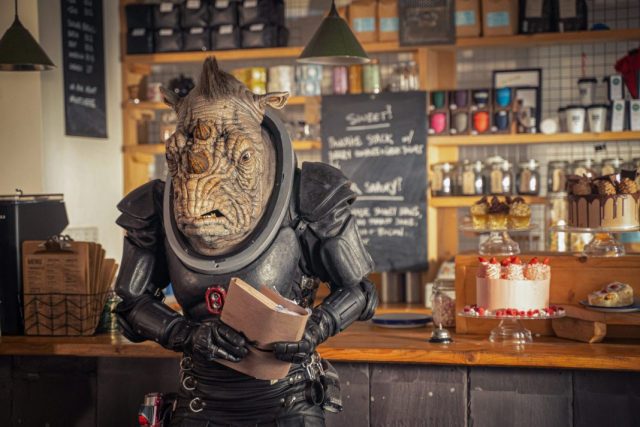 Graham’s mysterious disappearance anchors one of two very exciting surprises in this episode, even if this particular twist mostly exists to set up a bigger story turn later. It turns out, in the mother of all shocking turns, that Graham was beamed onto a stolen alien ship, being commandeered by none other than Captain Jack Harkness! Yes, after over a decade since his previous appearance on the show, and a full run as the lead character on former Doctor Who spin-off series, Torchwood, John Barrowman is finally reprising his role as the smooth-talking, over-sexualized space rogue, initially believing that Graham is The Doctor, in another funny jab at the world of difference between classic Doctor designs, and the current Thirteenth Doctor. Yaz and Ryan eventually get beamed onto the ship as well, in turn also providing a convenient excuse for The Doctor to branch off with Ruth.

The Ruth storyline very rapidly builds some standout momentum at this point, as the Judoon execute her husband, only to identify that Ruth is actually the fugitive that they’re looking for. Ruth has no memory of being a fugitive, but nonetheless manages to fight off the Judoon after receiving a mysterious text message, even removing the horn of the captain, the ultimate insult to the Judoon race! Naturally, The Doctor is very curious about where Ruth got those kinds of skills, and thus, the two drive off to Ruth’s childhood home, which happens to be in a far-off lighthouse. After The Doctor initially finds no compelling evidence that Ruth had a childhood there though, she eventually decides to dig up an unmarked grave, only to find… Her own TARDIS?!

Oh, but it gets better. After Ruth re-activates a mysterious beacon in the lighthouse, restoring her former memories, she ends up leading The Doctor into the TARDIS, shortly after Ruth declares that she is, in fact, The Doctor! Obviously, this is incredibly confusing to the ‘real’ Doctor, since even her Sonic Screwdriver (a device that Ruth doesn’t have, and outright scoffs at), claims that Ruth really is the same person as her. This has massive implications for the Doctor Who universe, since, while the series has dabbled in simultaneous Doctors before, they were either prior regenerations, or confused impostors. In this case though, Ruth is seemingly the genuine article, a heretofore unseen regeneration of The Doctor, which opens up a ton of questions about how two different incarnations of The Doctor are simultaneously existing in the present day, and yet, neither of them recognizes the other.

This huge twist does at least explain why Ruth is being hunted by the Judoon, but it merely opens up a whole new mess of questions. Even more questionable is the fact that Ruth appears far more aggressive than the ‘real’ Doctor, even leading to the Judoon’s contact, Gat accidentally being killed by a rigged rifle, something that The Doctor greatly disapproves of. Regardless however, Gat is clearly answering to someone else, and is a Time Lord herself, a Time Lord that, like Ruth, is completely unaware that Gallifrey has been destroyed. The Judoon vow to fulfill their contract against Ruth in the future, but they are nonetheless forced to retreat after this, shortly before Ruth boots The Doctor from her TARDIS, with viewers being no closer to understanding how Ruth has existed as a secret incarnation of The Doctor, one that doesn’t appear to be from the past nor the future. 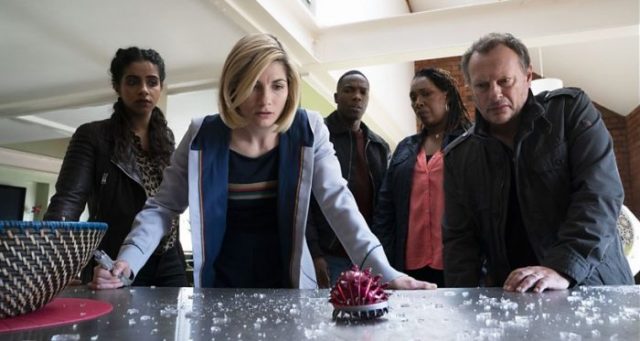 The obvious speculation from this great twist with Ruth is that Doctor Who is removing its rule of not incorporating parallel universes or a multiverse into the show’s storyline, and that Ruth is a Doctor from a parallel universe, one where Gallifrey was never destroyed. Granted, in comic book offshoots most notably, Doctor Who is part of a multiverse, and the Doctor Who universe is in fact designated as Earth-5556 by Marvel at least, even though it’s doubtful that the live-action episodes of the show will ever acknowledge this crossover connection with other brands like Marvel. Regardless, Chris Chibnall’s turn as showrunner for Doctor Who has flirted with the idea of parallel universes in Doctor Who canon for a little while now, especially this season, and this may open up a whole new avenue of storytelling for the series. Even the brief re-appearance by Captain Jack, who promises that he will return to see The Doctor soon, seems to suggest that an extra-dimensional threat is on the way, namely a, “Lone Cyberman”, whom Jack urges The Doctor’s companions to never acquiesce to the desires of. It’s also possible that the Cybermen have just found yet another way to cheat death after their last encounter with the Twelfth Doctor, but if they’re the same Cybermen from the main Doctor Who universe, then it would be comparably more exciting if this ‘lone Cyberman’ is Bill Potts, the Twelfth Doctor’s final companion, who was turned into a Cyberman, and was previously seen jetting off to explore the universe with her lover, Heather.

The fact that, “Fugitive of the Judoon” hit such an amazing high note however, with no real shortcomings to speak of, is another testament to how exciting Series Twelve of Doctor Who has been when it’s really on its A-game. The season already delivered a superb episode last week, and it’s awesome to see that be followed up by another contender for one of the season’s best offerings this week. The return of the Judoon, and their first battle against the Thirteenth Doctor, is exciting enough, but even better is the episode really throwing open the floodgates with the ongoing mystery of Gallifrey and the Time Lords, while also providing a fresh pile of evidence that Doctor Who may be about to get a bona-fide multiverse, at least in its main live-action television setting. New Who just doesn’t get any better than this, and while we did see a few bumps in the season’s second and third episodes, it currently seems like Doctor Who is on a hell of a hot streak now! We still have half of Series Twelve left to go, but it’s looking like the Thirteenth Doctor may have found her definitive story arc this season, one that only gets more interesting every time it’s expanded upon.