Batwoman didn’t exactly kick off 2020 on the best note with last week’s underwhelming midseason premiere, but the struggling Arrowverse series did at least manage to see some improvement during this week’s offering. “An Un-Birthday Present” has the advantage of building off of last week’s big final twist, namely that a Beth Kane doppelganger has found her way into Kate’s office, suggesting that certain doppelgangers from the destroyed multiverse have wound up on the new Earth-Prime. A fresh problem nonetheless distracts Kate however, when the sons of two high-ranking Gotham City officials end up being kidnapped by Mouse, who demands that Alice be returned by the Crows, in exchange for the boys’ lives.

You’d think that the GCPD would have every excuse to ally with Batwoman now, but amazingly, the police force doesn’t want to call on Kate’s vigilante alter-ego, allegedly because she recently came out as a lesbian through CatCo. Yeah, this is one of the only parts of an otherwise decent Batwoman episode that really doesn’t fly. Not only is this a really transparent excuse to keep Kate away from the resources of the GCPD, but it’s also a very forced turn that acts like being a lesbian celebrity is a super political thing in 2020, and the blunt truth is, it’s not. It’s just not anymore. Hell, even in this very episode, one of Mouse’s hostages claims that no one cares about anyone’s sexual orientation in 2020, and he’s right! This is just bad writing, and it treats the viewer like they’re stupid, and like they have no idea how the world actually works in the present day. Kate having Batwoman take a political stance, and alienating the GCPD in the process, isn’t a terrible idea on paper, mind you, but the simple act of Kate having Batwoman publicly come out as a lesbian in the media is no longer a truly political act, which ruins the idea. 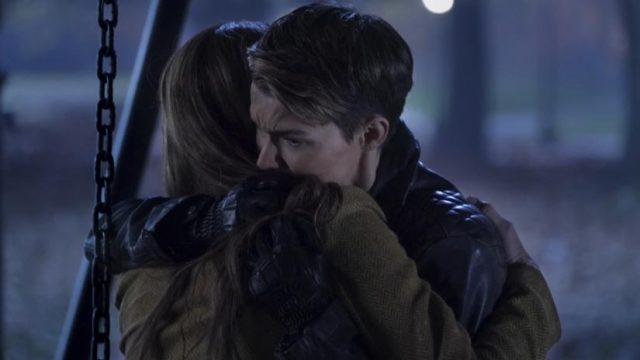 Regardless, Kate is on her own when it comes to saving the hostages, since the Crows obviously aren’t going to help her either. Before Kate can properly suit up though, she has to make peace with her sister’s doppelganger, whom she initially scares off, after inevitably mistaking her for Alice. Naturally, this Beth is indeed a displaced multiverse doppelganger as well, being the Beth from Earth-99, the future-era universe wherein Kate died during her career as Batwoman, and Beth never became Alice. The Earth-99 Beth showing up on Earth-Prime actually leads to a pretty great character conflict for Kate too, wherein she learns that her dead Earth-99 doppelganger did what she failed to do so many years ago, and pulled Beth away from the car wreck on the bridge. This has Kate struggling with her past yet again, now seemingly having proof that she could have saved her sister, and thus making her feel especially responsible for Gotham City’s current criminal scourge.

Alice, meanwhile, remains in custody with the Crows, and spends virtually this entire episode taunting Sophie. This made for another better storyline than Batwoman usually delivers, particularly since Sophie makes an honest effort to try and sympathize with Alice, even as Alice keeps antagonizing her. Not only does this provide a good way to make Sophie a more interesting and vulnerable character, particularly when Alice goes for the jugular with Sophie’s own repressed homosexuality (a conflict that’s realized much better than the asinine GCPD homophobia), but it also provides another good opportunity to show some flashbacks of Beth’s time in Cartwright’s captivity. After Cartwright murders a kitten that Mouse tries to present to Beth most notably, subsequently forcing Beth to use her sewing skills to make skin masks for Mouse, Beth finally snaps, and first concocts her Alice identity. This is a sinister and tragic tease of the exact moment that Beth became truly broken, as well as the moment wherein she officially learned that her father remarried, and her family seemingly forgot about her.

This episode even tries the inspired idea of making Kate extra vulnerable to boot, and not giving her an immediate advantage during the hostage crisis. Before Kate can race back to Wayne Tower and suit up, after beginning her hunt for the Wonderland Gang, the Wonderland Gang surprisingly comes to her, ramming her motorcycle off the road, and knocking Kate out in the process! This leads to Kate being tied up with the other hostages, necessitating a save from Beth’s Earth-99 doppelganger, who attempts to disguise herself as Alice, with Mary’s help. Not only was this a genuinely clever way to try and get one over on Mouse (even if it is unfortunately foiled by a heretofore unknown code phrase that Beth and Mouse share as a way of verifying no danger), but it also provides a surprisingly good scene between Beth and Mary, while Mary is doing Beth’s Alice disguise, whereupon Beth apologizes for Mary losing her mother to Alice’s evil. Mary so far hasn’t infuriated me in 2020, actually, so I’m hoping that her character writing is slowly starting to improve after Catherine’s death, but alas, the back portion of the season is young, so we’ll see.

Like I said, as smart as the attempt to trick Mouse is, it does fail, and Beth ends up being locked in the hostage car’s trunk as a result, which Mouse soon after sets on fire, after Kate gets free. Kate manages to free the hostages however, though initially fails to free Beth… Until she returns with a way to pry off the metal casing keeping Beth in the trunk, subsequently pulling her sister from the flaming wreckage. This is a bit of a predictable turn, but it is nice that Kate got her old sister back from her tortured memories, in a manner of speaking. Comparably predictable and less forgivable however is Sophie somehow handing Alice a weapon via her Alice in Wonderland book, through which Alice inevitably escapes, after Sophie runs the book through numerous scanners, and yet never physically looks inside it. Okay, that one’s on you, Sophie! I have no idea how Sophie did such a thorough check on Alice’s book, without ever realizing that the pages were fake, and there was an entire sling weapon in it. It didn’t even set off a weight alarm or metal detector? Really? 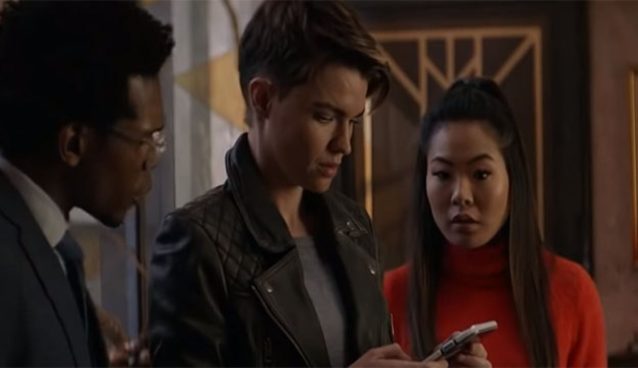 This episode does at least end on another interesting twist though, with Beth and Alice both simultaneously suffering a horrible migraine, likely because of the fact that they’re two doppelgangers living on a shared Earth. Okay, this is a new rule that hasn’t previously come up with doppelgangers in the Arrowverse, but perhaps it’s part of the re-written physics that were allegedly created on Earth-Prime, which the upcoming midseason premiere of The Flash is supposed to start delving into in earnest. In any case, I’m happy to see that, “An Un-Birthday Present” marks a bit of an improvement for Batwoman, even if its outright backwards LGBT politics are distracting at best, and insulting at worst. These debates over Kate’s sexuality might have worked in The CW’s short-lived Birds of Prey series, for example, but that’s because it aired almost two decades ago, when being a lesbian celebrity might have actually turned heads. In 2020 though, Batwoman’s sexuality would likely be met with apathy at worst, and more likely celebration by most of the public, and in a hostage situation with the commissioner’s own son especially, it’s an incredibly stupid reason to cut off Batwoman’s business connection with the police! Now that Kate’s newly-reclaimed sister is in another deadly situation however, hopefully we can move on to some more pressing and believable problems, after Batwoman takes a couple of weeks off from here.