Like vampires, werewolves are one of man’s oldest created fears. Nasty and fur covered, they’re humans turned beasts who are said to hunt during full moons, and only then, during which time they viciously attack and eat at least one unlucky person or animal. Chronicled in movies, books, comics, video games and music, these creatures are right up there as one of the more infamous things that are said to go bump in the night.

In the early 80s, Stephen King caught inspiration from such fictional beasts, and decided to write a different kind of story. The result was Cycle of the Werewolf, which turned into a short, graphic novel style narrative. Mixing short chapters and visceral illustrations, the book saw a partnership between the King of Horror and comic book artist Bernie Wrightson, whose name shows as Berni Wrightson on the original editions.

Cycle of the Werewolf — which was released in November of 1983 — is set in the fictional town of Tarker’s Mills, Maine, and chronicles the area’s bad luck over the course of a year. Specifically, during the full moons of that year, which only occur once per month. It’s during these heavenly lit nights when evil, in the form of a vicious werewolf, strikes, leaving multiple townspeople dead. Each chapter tells one of their brief and unfortunate stories. 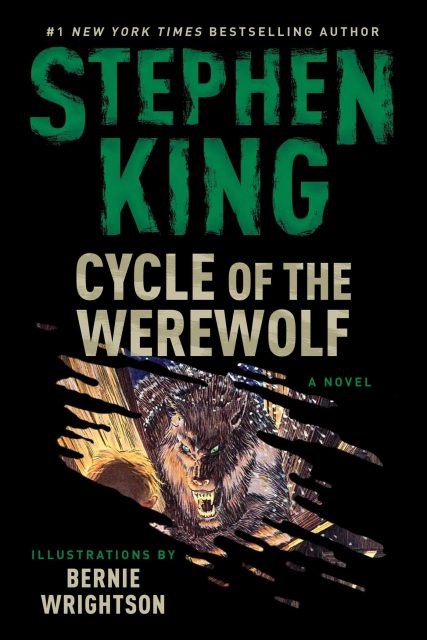 Entwined within these darkened nightmares is the story of a young boy named Marty Coslaw, who’s confined to an electric wheelchair due to a disability. Marty’s disappointment at not being able to see fireworks ends up putting him face to face with the werewolf, who visits his house late at night on the Fourth of July.

Given the brevity of this book and the nature of its story, I’m unable to really say more about Cycle of the Werewolf without spoiling it. However, if you’ve seen the movie Silver Bullet (1985, starring Gary Busey), then you already know the tale. That very underrated horror flick is based on this story, and was actually written by Stephen King himself.

We were provided with a copy of the recently released Cycle of the Werewolf: Illustrated Edition, and it’s that version of the book that serves as the basis of this review. I was, however, also able to find a copy of the early 80s paperback that they released following a limited run hardcover. It set me back $20, but was a good addition to my Stephen King collection, and helped me with this review. Reason being is that the new version of the book seems to basically be a reprint of that original paperback. That isn’t a bad thing, though, because the illustrations are well done (and appreciably campy), and this re-release makes what is a solid and fun read available to a wider audience.

If you haven’t read Cycle of the Werewolf, it’s well worth doing so, especially if you’re a fan of Stephen King. While it’s different from the average King book, both in terms of length and style, it’s a good story, and a fun take on the graphic novel format. It’s also a great addition to anyone’s horror collection.