Now that Harley Quinn has separated its titular anti-heroine from her crew and best friend, the show has a golden opportunity to go in on a storyline that’s exclusively about Harley and her backstory, with no Joker, no Poison Ivy, and no heists there to distract. “Bensonhurst” properly showcases a previously-teased story arc for Harley Quinn, namely Harley eventually having to go back to her hometown of Bensonhurst, and confront her dysfunctional upbringing. All the while, Poison Ivy remains captive, at the mercy of a mysterious goon-for-hire, who is working for a bigger villain, with an apparent desire to experiment on Harley’s former best friend.

With King Shark, Doctor Psycho and Clayface all completely sidelined in this episode, beyond a quick appearance in an opening gag, “Bensonhurst” is thus left to split itself between Harley and Ivy, and to a lesser extent, Frank, who serves as an extension of Ivy’s current predicament. It’s actually been a little while since Frank anchored a subplot on Harley Quinn, so I’m certainly not unhappy to see him get more of a spotlight here, even if he’s more or less a convenient exit strategy towards the end of the episode. Before that though, Ivy has to get a message out to Frank using a dandelion, so that Harley can be alerted that Ivy is captured, and will thus come to her rescue.

This Ivy subplot pretty transparently sets up the inevitable reconciliation between Harley and Ivy as best friends, but for now, we’re stuck with a rather unremarkable Ivy storyline that quite literally straps her to a table, and doesn’t do anything else for her character. The goon-for-hire overseeing Ivy tries some jokes, as does the dandelion that Ivy brings to life to try and alert Frank, but these jokes don’t really land that well, and are definitely overshadowed by the main storyline with Harley. There is however an interesting reveal at the end of the episode on this note, when it’s revealed that Scarecrow is the one experimenting on Ivy, to some unknown end. This partially explains why Scarecrow has gotten a bit more emphasis than some of the other recognizable Batman villains on Harley Quinn at this point, at least outside of Bane, who more or less serves as comic relief in the animated Harley Quinn universe.

As for the main plot with Harley though, it more frequently fires on all cylinders, presenting a standout mix of humour and violence, as well as quality character development. When Harley returns home, after the henchman that kidnapped Ivy sends a text from Ivy’s phone that appears to indicate Ivy severing ties with Harley for good, Harley reunites with her mother, and considers moving back home. This potential turn with Harley will definitely hit a lot of Millennials close to home to begin with, but worse still is that Harley eventually has to confront her deadbeat father to boot! Fresh out of prison and swearing up and down that he’s changed, Harley nonetheless initially rejects her father completely, on account of the inspired and tragic twist that Harley used to be an Olympic-level gymnast in the Harley Quinn universe (which nicely explains her acrobatic skillset), but Harley’s dreams of glory in the sport ended up dashed when her father forced her to take a dive for a payout from his bookie. 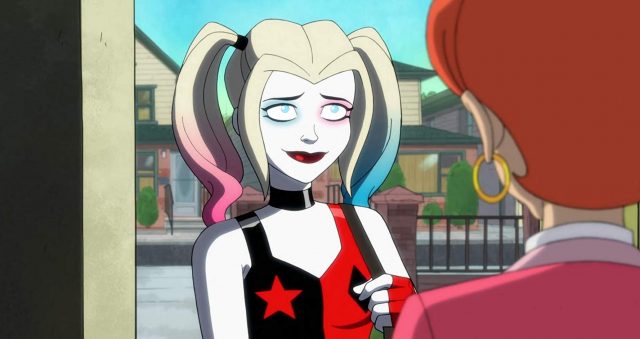 This beautifully sets up the tension that Harley has with her family, particularly her father, though this conflict is eventually interrupted when assassins target the Quinzel household, hilariously and brutally blasting a hole in Grandma Quinzel’s head to start! Several action sequences thus unfold from here, with Harley taking the fight to some mob goons, alongside her father, and eventually reconciling with him, believing that she’s reconnected with her roots… Until both of Harley’s parents turn on her following Harley killing another assassin (this time one that blasts a hole in Harley’s grandfather, fittingly enough), revealing that they’re collecting a $1 million bounty that’s been placed on Harley’s head! This is both funny and effective for Harley’s character, allowing Harley to regain her independence, walk out on her selfish parents, and eventually drive off with Frank, desperate to rescue Ivy.

The cherry on top was the reveal that Joshua Cobblepot misappropriated a Legion of Doom credit card to put the aforementioned hit out on Harley as well, something that Bane eventually rectifies, in a brilliantly funny throwback to the events of Harley Quinn’s second episode, when Harley wrecked Joshua’s bar mitzvah. The standout payoff from this episode that actually will have lasting consequences however is the dramatic reveal that Scarecrow is the one that captured Ivy, potentially setting up Scarecrow as a climactic villain for Harley Quinn’s debut season. We still have three episodes left to go in Season One, but it does seem about time for Harley Quinn to start preparing a climax for its first season arc, one that thankfully doesn’t appear to involve the Joker, or at least not currently. Either way, “Bensonhurst” nicely sidelined Harley’s former crew, and instead went all in on further fleshing out Harley’s backstory, which it ended up doing with funny, squeamish aplomb. The subplots with Ivy and Frank weren’t quite as entertaining, by contrast, but they were at least amusing enough to get by. Perhaps it’s just a testament to the fact that Ivy is really at her best with Harley by her side in the Harley Quinn universe, and with Harley racing to Ivy’s aid, here’s hoping it’s not long before the dream team of villainous women can put themselves back together again!