NOTE: Some spoilers from throughout the eighth and final season of, “Arrow” are present in this review

It’s been a long time since Oliver Queen first began his mission to rid Star(ling) City of its criminal scourge. Since Arrow’s premiere on The CW in 2012, that simple kill list carried by Oliver’s original vigilante alter-ego, “The Hood” ended up inspiring an entire small screen DC Universe lineup of television shows on the network, whether originally made for it, or acquired from other networks after plans for their pitches initially fell through. This crowded, but relatively successful slate of DC shows also leaves the so-called ‘Arrowverse’ going stronger than ever in 2020, even after Arrow’s lead character ultimately sacrificed his life, a whole two episodes before the show’s series finale, during the Crisis on Infinite Earths crossover event. This universe-birthing sacrifice by Oliver even resulted in all of The CW’s ongoing DC programming being merged together into one ultimate shared television universe, with a new multiverse in turn being birthed to serve as the homes of classic and new live-action DC media that’s separate from Arrowverse canon.

That’s a lot to have spawned from one man’s mission to avenge his father’s death by killing his many criminal co-conspirators, in a televised universe that initially refused the implementation of superpowers, metahumans and any kind of fantasy elements. Arrow has since become a very different show by the end of its run compared to when it started however, now happily occupying a universe shared by super-powered speedsters, time-traveling stooges and god-like aliens that fly around in red capes, among other proudly fantastical characters. Arrow’s amazing evolution is exceptionally showcased during its eighth and final season as well, which more or less serves as an extended series finale before the show’s actual series finale from late January, devoting each episode prior to Oliver’s death as a way to showcase different story arcs and narrative twists from each of Arrow’s prior seasons. 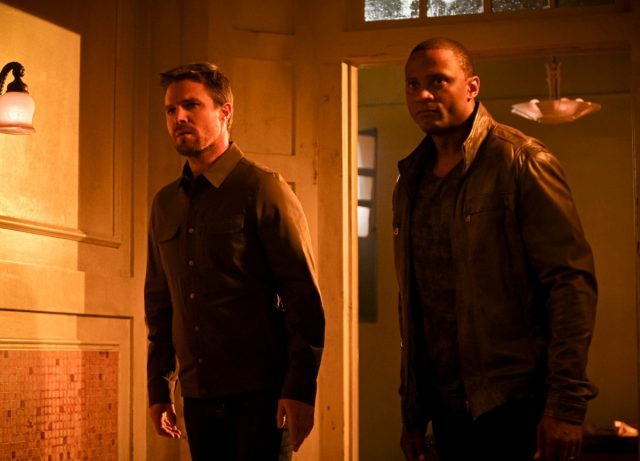 After Arrow found renewed momentum during its surprisingly strong seventh season as well, the decision to shorten the show’s eighth and final season to just ten episodes initially felt like a let-down, though this ultimately proved to be the ideal length through which to give Arrow a satisfying final bow that covered its important bases. That said, one noticeable shortcoming to the show’s final season is that it sometimes had to eat up episodes revisiting lesser or failed story arcs from the series’ past, such as Arrow’s disappointing League of Assassins portrayal, along with its unrewarding Hong Kong flashbacks, and especially that bizarre brush with the occult in Season Four (which was thankfully corrected with the sublime Season Five immediately afterward), but taking the bad with the good nonetheless still amounted to a smart way to bring Arrow full circle, and present it with the kind of epic, heartwarming conclusion that a show with this kind of incredible legacy ultimately deserves.

Of course, one key element to Arrow’s final season that stands out most is the season also serving as a doomsday prophecy for Oliver in the lead-up to this past Fall’s/January’s major DC TV crossover event, Crisis on Infinite Earths, a narrative ordeal also shouldered by sibling series, The Flash, to similarly strong effect. In a big deviation from DC Comics lore as well, Oliver’s final mission to try and save the multiverse ultimately transformed him into the Arrowverse’s new host for the Spectre, a vengeful, otherworldly spirit that most notably occupies detective, Jim Corrigan in DC lore (an alternate version of Corrigan also had a cameo during Crisis on Infinite Earths, to acknowledge this), and one that finally allowed Oliver to achieve his mission of becoming, “Something else”, a narrative goal that’s been teased since Arrow first started in 2012. What initially seemed to be a declaration of Oliver’s intent to become the Green Arrow that DC fans recognize instead turned out to be a journey for Oliver to become the architect of his universe’s salvation, with Oliver using his dying breath after the multiverse’s ultimate destruction to allow a new universe to be born, one that not only restored the home of Arrowverse characters from The Flash, Legends of Tomorrow and Batwoman (along with the Arrow characters, naturally), but one that also merged the realities of Supergirl and Black Lightning into it to boot, finally allowing The CW’s two ongoing, universe-locked DC shows to fully co-exist in the same world as the others.

Even after Oliver’s ultimate demise at the Dawn of Time however, whereupon he was allowed to take the Spectre’s power into a sort of idyllic afterlife with his wife, Felicity Smoak (who disappointingly sat out all but the very last episode of Arrow this season), Arrow was still left with two episodes to wrap up its storyline. The penultimate episode of Arrow was thus utilized as a backdoor pilot to start showing off a potential successor series, Green Arrow & The Canaries, which would follow Oliver’s adult daughter, Mia within a 2040’s-era Star City, alongside time-displaced Arrow veterans, Dinah Drake and Laurel Lance, who form a new, female-driven Team Arrow to fight some mysterious new criminal organization in the future. It wasn’t a terrible pitch, but Green Arrow & The Canaries’ backdoor pilot nonetheless inadvertently proved that the new DC TV universe that Arrow helped birth can function just fine without a revisiting of Star City, and without ongoing storylines for Team Arrow itself. That being said, Arrow’s uneven flash-forward storyline that started in Season Seven finally got a solid payoff during the show’s final season, even outside of the hopeful first look at plans for Green Arrow & The Canaries, when the coming Crisis had Mia, along with Oliver’s son, William, and Diggle’s adopted son, Connor, warped into the present day as their adult selves, allowing Oliver to meet his fully-grown children, and briefly fight alongside them for the fate of the multiverse.

Finally, Arrow’s true series finale may not have been perfect, but it did work as an emotional final send-off for Oliver, one that thankfully kept the Green Arrow & The Canaries teases to a minimum, while once again going back to acknowledging the incredible impact that Oliver’s heroic journey has had on the Arrowverse overall. Even The Flash and Supergirl showed up to Oliver’s proper funeral, which also brought back several legacy Arrow characters for one strong final farewell, including several characters that were formerly killed during Arrow’s previous Earth-1 history! As it turns out, not only did Oliver’s creation of Earth-Prime merge all of The CW’s current DC programming into one shared reality (along with providing convenient parallel Earth homes for various classic and ongoing DC movie franchises and TV shows, along with upcoming DC streaming shows to be hosted on DC Universe and HBO Max), but it also resurrected several fallen characters, including Oliver’s mother, Moira, Quentin Lance, Emiko Adachi and Tommy Merlyn, whose Earth-Prime histories were changed so that they never met their ends at the hands of Arrow’s former arch-villains. Oliver’s father, Robert ultimately stayed dead meanwhile, alongside Earth-1’s Laurel, with the somewhat weak excuse that Oliver couldn’t alter certain fundamental changes in his Green Arrow journey when he formed Earth-Prime (somehow, it seems doubtful that the reversed character deaths had no impact whatsoever on Oliver as a vigilante), but all in all, the show still found its way to a strong, happy ending, one that presented some promising new career opportunities for many of Arrow’s surviving characters, who will no doubt continue to show up for guest stints throughout the Arrowverse’s other ongoing shows, after Arrow’s conclusion. 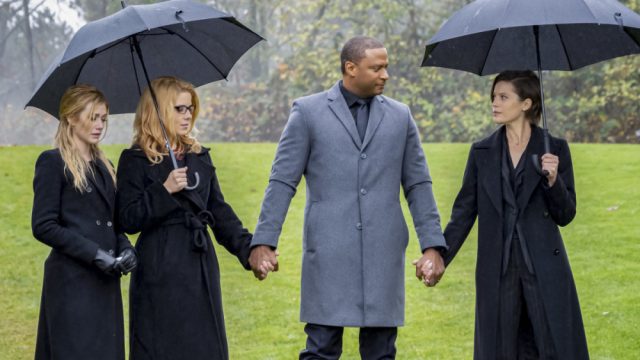 Arrow’s shortened eighth and final season hits a few speed bumps here and there, but it’s nonetheless a mostly fitting farewell to one of the most influential and iconic shows in The CW’s history. Arrow has truly had a hell of a run, not just because of how much great entertainment the show has provided throughout the strongest storylines spawned by its own world, but also due to its launch of series creator, Greg Berlanti into one of the most celebrated and busy television producers of the modern era. Berlanti’s rise off of Arrow not only helped spawn an entire universe of DC programming on The CW (all of which is overseen by Berlanti’s production arm), along with other, self-contained DC shows on streaming platforms, DC Universe and HBO Max (in fact, last year’s frustratingly-cancelled Swamp Thing series is the only live-action DC drama on DC Universe or HBO Max that Berlanti didn’t serve as a producer for at this point), but it also helped launch high-profile, Berlanti-produced shows independent of DC branding, including NBC’s Blindspot, The CW’s All-American, The CW’s Riverdale (along with its new spin-off, Katy Keene), and Netflix’s The Chilling Adventures of Sabrina.

It can’t be understated just how much Arrow has raised the bar for the scope of modern television. To that end, the show receives a fitting, reverent tribute to its grand legacy throughout its final ten episodes. Maybe not every story arc from Arrow’s eight-year run ultimately ended up being brilliant, but this final season certainly brings the landmark journey of Oliver Queen to a worthy, bittersweet conclusion, setting the stage for a bold new era for the Arrowverse, while also fundamentally redesigning the multiverse fabric that holds together the various live-action DC adaptations throughout both television and movies. That’s not bad at all for a DC character that isn’t even generally part of major factions like the Justice League, and is seen as something of a B-lister in the printed panels. On our TV screens however, Oliver will always be fondly remembered as the man who saved the live-action DC multiverse, both metaphorically and literally, and set the stage for an entire pantheon of similarly great DC television programming in his wake.