Series Twelve of Doctor Who is getting a bit frustrating at this point. Despite the fact that some truly stellar episodes have been featured this season, there have also been too many other storylines rounding out the season that are frequently hamstrung by half-baked conflicts and sloppy writing. These issues once again felt prevalent throughout this week’s offering, “Can You Hear Me?”, another Doctor Who episode that presents an interesting idea in concept, but executes it in such a rushed, underwhelming fashion that it squanders the initial concept’s potential. For some reason, it seems like several of this season’s Doctor Who mysteries are being spawned from hastily scribbled-out first drafts, despite the series entirely sitting out 2019, outside of one New Years special, and this week’s episode is the latest example of that worrying trend.

Even this week’s detour into the past feels completely redundant, wherein The Doctor picks up a stowaway while briefly visiting Aleppo, 1380, after the TARDIS alerts her to a problem. This problem comes by way of mysterious creatures (whom the TARDIS claims don’t actually exist), abducting the workers throughout one of the world’s first hospitals in 14th Century Aleppo, save for one, Tahira, The Doctor’s new ally. The Doctor’s usual three companions, meanwhile, all take a breather in Sheffield while The Doctor checks out Aleppo, though they also separately get contacted by mysterious beings during this time. While Graham is psychically contacted by a mysterious woman from an unknown sector of the universe, Ryan and Yas both watch their best friend and sister, respectively get whisked away by a mysterious man with detachable fingers. Well, that’s suitably weird for a Doctor Who mystery, but it’s too bad that the payoff isn’t better than this surreal form of attack. 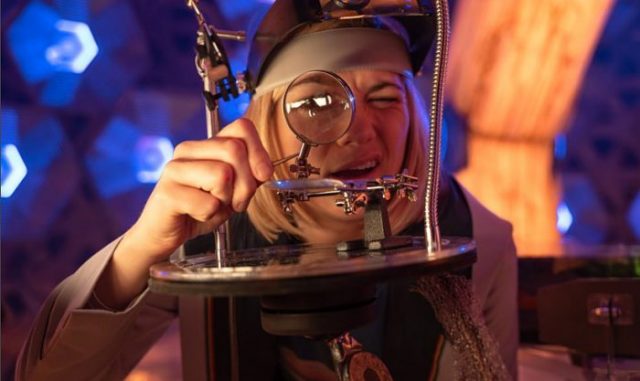 I will say however that there is one really smart story twist that leads nicely into the climax of this episode. After The Doctor hooks the TARDIS’ telepathic circuits up to Graham’s mind, she finds where the psychic message came from, namely the far future, where the message originates from an orb that’s sandwiched between two collapsing planets. While The Doctor is distracted however, Tahira wanders off, with the companions going to find her. All four of The Doctor’s allies are then captured by the mysterious man with the detaching fingers, being trapped in a realm of their own nightmares, which The Doctor eventually discovers, after opening the lock on the orb’s internal prison. It turns out that The Doctor freeing the orb’s prisoner was a deadly mistake as well, since the prisoner is the mystery man’s partner, and both happen to be dimension-hopping gods that cause trouble on planets for fun.

The man, Zellin, and his partner, Rakaya, mark the latest instance of Doctor Who incorporating multiverse-themed storytelling, after the show previously refused to do so for decades. The fact that these two powerful, god-like figures are pretty much unstoppable and omnipotent is pretty exciting as well. As cool as it is to see Zellin manipulate The Doctor’s heroic instincts for his own ends however, the payoff to this big conflict with two literal gods remains incredibly disappointing. This storyline really should have been a two-part season finale arc or something, because there just isn’t enough space in a normal Doctor Who episode for The Doctor to adequately outsmart and defeat two figures that are this absurdly powerful, invulnerable and immortal, at least without it feeling completely asinine and unbelievable, which it absolutely does in this case. 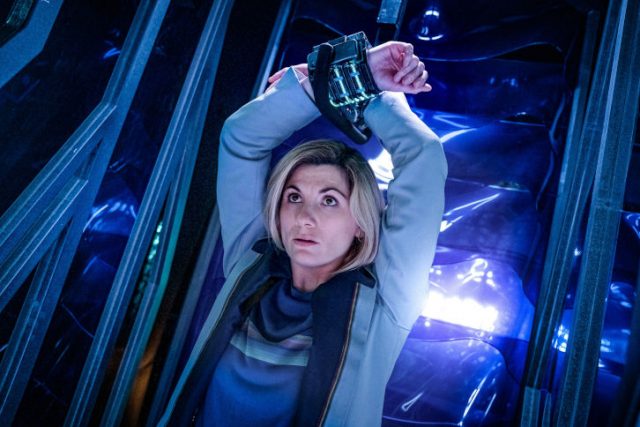 Adding insult to injury is that the battle against Zellin and Rakaya feels like it’s very quick, and is wrapped up pretty much entirely within ten minutes. This hasty resolution starts when The Doctor quickly figures out that the mysterious creatures from Aleppo, the Chagaska, are fantasy creatures that Zellin created from Tahira’s nightmares, before forcing them to do his bidding. Why? Who knows. Zellin creating living nightmare slaves out of some unknown girl from 1380 is incredibly random, and fails to justify the need for The Doctor to go to Aleppo in the first place. Not only that, but after The Doctor essentially tricks Zellin and Rakaya into going to Aleppo using the psychic call of the Chagaska (why the hell would Zellin and Rakaya fall for this? It’s a very obvious trap!), she simply waves her Sonic Screwdriver, and traps both of the immortals in Rakaya’s old prison, to be menaced by the Chagaska for all eternity. This is a dumb, anti-climactic conclusion, and it makes Zellin and Rakaya look like idiots, let alone pushovers.

There’s almost a whole ten-minute stretch left in the episode after Zellin and Rakaya are defeated to boot, contributing wonky pacing to another narratively undercooked Doctor Who offering from this season. This ten-minute stretch is meant to have Ryan, Yas and Graham addressing their ongoing fears and insecurities as companions to The Doctor after their nightmares, but almost all of these conflicts are completely pointless. Yas apparently ran away three years ago, before a cop made a bet with her to return home, and Yas finally pays the cop back, as promised at the end of this episode, but while this is heartwarming, it doesn’t contribute anything useful to Yas’ backstory. Graham, meanwhile, is scared of having cancer again, but that should be obvious, plus the fact that Grace appeared again in his nightmare, and didn’t recognize him, is completely un-addressed, making it a huge waste of Grace re-appearing on the show again. Ryan is the only companion with a decent internal conflict here, namely when he feels that he’s abandoned his struggling best friend, and can’t conclude his adventures with The Doctor without changing at a different rate from the people he loves. This conflict still isn’t fleshed-out enough though, beyond a potential tease that Ryan may be departing the TARDIS at the end of this season, assuming it’s not just a total red herring.

All in all though, “Can You Hear Me?” feels like another wasted, disappointing episode for Doctor Who, threatening to leave Series Twelve with more misses than hits, at the rate the show is currently going. Sure, Series Twelve has had some of the best episodes of the Chibnall era in particular so far, but now the season’s sub-par episodes are officially outnumbering the great ones. There’s still time for Doctor Who to recover before its current season is done, of course, especially with the promising tease that The Doctor and her companions will be meeting original Frankenstein author, Mary Shelley in next week’s episode, but at this point, I’m just hoping that the season manages to stick the landing. The Doctor’s own nightmares continue to nicely tease The Master’s conspiracy, suggesting that the end of this season is bound to have huge implications for the Doctor Who universe as a whole, but for now, it seems like we’re stuck slogging through disposable filler adventures, until the show gets a chance to go back to the big narrative mystery that audiences can truly care about.

Doctor Who 12.7: "Can You Hear Me?" Review
Doctor Who squanders another interesting mystery in another sub-par episode this week, one that fails to derive anything meaningful from some very dangerous new foes.
THE GOOD STUFF
THE NOT-SO-GOOD STUFF
2020-02-11
62%Overall Score
Reader Rating: (0 Votes)
0%