Harley Quinn officially kicks off its first season’s big climactic arc in this week’s episode, after revealing the new biggest threat to Gotham City in this show’s universe. “Harley Quinn Highway” is a little slow to get going, and it is a bit of an overstuffed episode that doesn’t always make the most of its narrative ideas, but fortunately, it’s still a mostly entertaining offering for DC Universe’s first adult-oriented original cartoon. Not only that, but the climax of this episode is exceptionally awesome, allowing the previously uneven story elements to add up to a truly off-the-wall and hilarious finish, one that only further ups the stakes facing this show’s animated rendition of Gotham City.

With Harley racing to rescue Ivy from the clutches of Scarecrow as the episode starts, Frank tells Harley that there’s no way she can rescue Ivy with just herself, and she needs to reunite her old crew. There’s a few funny jokes surrounding Harley’s efforts to rally her old friends, particularly Clayface working as an especially irritating new henchman for the Riddler, but this part of the episode is a little slow, and doesn’t really feel that exciting to watch. Inevitably, Harley will re-assemble her crew without much fuss in the end, a crew whose threats to want to never see Harley again afterward feel like they’re never going to stick. Even Sy finally comes along on this particular operation in fact, giving Harley’s crew a convenient added layer of protection, as they must enter Ivy’s mind to truly save her.

The crew’s initial entry into Scarecrow’s lair is pretty funny at least, with Harley’s crew disguising themselves as food delivery people to get into the building, after Ivy’s fruitless and pointless escape kicks off the episode on a bit of an underwhelming note. The plot by Scarecrow to blend Ivy’s pheromones with his fear gas, making Ivy susceptible to poison that she should be immune to, which will in turn cause all of the plants in Gotham City to run amok, is pretty great though. This sets up a good threat to be presented by Scarecrow, and the Legion of Doom at large, for the climax of Harley Quinn’s debut season. Yes, it’s inevitable that the Legion of Doom would eventually alienate Harley, but again, it is nice that they did so without any direct involvement from Joker at this point, which would have been a low-hanging narrative fruit.

Regardless, the trip into Ivy’s mind also feels a little underwhelming, even if the humour does improve a bit here. There’s a few peeks at things like Ivy’s own troubled upbringing, but none of it really amounts to anything from a narrative standpoint. The rest of Ivy’s mental obstacles are also disposable in turn, until Harley and her friends defeat a reaper-like figure representing Ivy’s greatest fear, which is soon after revealed to be… Harley herself! Granted, a lot of Batman/DC fans probably saw this coming, since Harley Quinn very much feels like it will eventually build up to the Harley/Ivy romance that’s become a recurring plot element in DC Comics lore. Ivy may still be happily dating Kite Man at this point, but the mental Kite Man’s incineration at the hands of Reaper Harley could also suggest that Ivy’s feelings for Harley are stronger than they are for Kite Man, and that’s no doubt something that Harley Quinn will eventually want to explore, should the series be successfully renewed for a sophomore season. 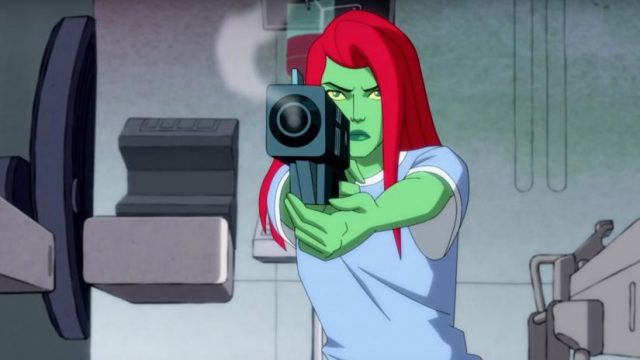 Like I said though, it’s the climax of this episode that proves to be its most exciting and hilarious portion. After Sy quite literally transforms into a car, so Harley, Ivy and their crew can chase down Scarecrow’s fear toxin-carrying trucks, Harley’s crew find themselves pursuing Scarecrow on Harley’s own ‘Harley Quinn Highway’. This was an awesome and brilliant way to call back to Harley’s initial villain demand for Gotham’s mayor, with Harley apparently getting full creative control of the highway’s design, and in turn designing it like a demented Hot Wheels track, complete with weapons caches, loop-de-loops, fiery hoops, and pools filled with crocodiles. Harley and Ivy trying to work out their differences while taking on Scarecrow’s henchmen, and braving the deranged dangers of the highway all the while, is especially amusing, providing an excellent cocktail of character drama, high-speed thrills, and madcap comedy.

Even then however, Harley’s crew is ultimately unsuccessful, with Scarecrow triumphantly unleashing his toxin on Gotham City, by driving a truck into its water supply. This leaves the episode ending on a cliffhanger, as various plant monsters begin wreaking havoc around Gotham, with Harley’s crew so far left only to gawk at the destruction that Scarecrow has successfully wrought. As much as the journey to get to this point is pretty uneven at times, “Harley Quinn Highway” at least excels in terms of this outstanding payoff, nicely evolving the strained relationship between Harley and Ivy, while also effectively setting the stakes for the season’s climax. It’s a little odd that Batman never showed up to deal with the carnage on the Harley Quinn Highway, but I imagine that the current destruction facing Gotham at large won’t keep Batman and/or the Justice League away for long, even as Harley Quinn will likely inevitably find a way for Harley’s band of misfits to end up rising as the real heroes against the Legion of Doom.

Harley Quinn 1.11: "Harley Quinn Highway" Review
Harley Quinn struggles with an uneven first half to this week's episode, but pays it off well with an excellent climax, as Scarecrow's plans for Gotham are unleashed.
THE GOOD STUFF
THE NOT-SO-GOOD STUFF
2020-02-12
77%Overall Score
Reader Rating: (0 Votes)
0%