Now that Black Lightning is finally headed to Markovia, the show is preparing to kick off the events that will launch Season Three’s climax in this week’s episode, while also bringing the rather uneven ‘Book of Markovia’ story pod to a close. “The Book of Markovia: Chapter Four: Grab the Strap” still spends a bit too much time spinning its wheels in places, especially with several character conflicts that ultimately go nowhere, but the payoff to this episode is well worth it, as it finally gives Jefferson and his crew a chance to take the fight directly to Markovia’s doorstep, in an effort to rescue Lynn. Unfortunately for them however, Markovia already has at least one stable metahuman available to stand against them, and he’s quite a dangerous foe indeed.

Despite being billed to appear early in the season as a recurring guest star, we’re only now seeing Wayne Brady make his debut on Black Lightning as Tyson Sykes, a.k.a. Gravedigger, a dangerous, yet charming metahuman that’s working on Markovia’s payroll. Since Mosin has ultimately failed to coerce Lynn and Dr. Jace into developing metahuman stabilization cures, the Markovian authorities bring in Gravedigger to do Mosin’s job for him, finally allowing the character to appear on the series. In DC Comics lore, the Tyson Sykes rendition of Gravedigger, the second character to use that mantle in the printed panels (the first, Captain Ulysses Hazard, possessed no metahuman abilities, and was simply an expert marksman and soldier), has telepathic powers, derived from an injection taken from the DNA of alien conquerer, Starro. In the Arrowverse however, Gravedigger is simply another metahuman, one who has superhuman strength and speed, and can also ‘push’ thoughts into someone’s frontal lobe using telepathy, having had a former history with Dr. Jace as well. 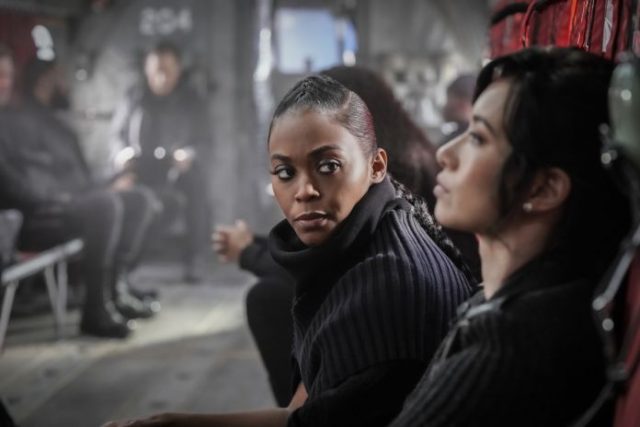 Brady is definitely one of the highlights of this episode, making it all the more disappointing that it’s taken so long for Gravedigger to finally appear on Black Lightning. Gravedigger is used in a highlight subplot with Lynn, involving Lynn having to try and outsmart Gravedigger and his telepathic abilities, after Gravedigger is able to coerce Lynn into working quickly on metahuman stabilization cures. This provided a standout opportunity for Lynn to actually work with Dr. Jace, utilizing Green Light, along with a blood sample that they trick Gravedigger into giving them, in order to create temporary psychic shielding for Lynn, along with her own ability to coerce people’s thoughts. This also ends up playing nicely into the episode’s climax, allowing Lynn to get herself out of trouble to some extent, just in time for Jefferson and co. to come rescue her.

Speaking of Jefferson and co., most of this episode’s early portions are purely dialogue-driven, as Jefferson’s misfit band of heroes try to team up and learn to work together, in order to rescue Lynn, and Tobias. Jefferson is naturally not thrilled about having to grab Tobias as well, but it is part of the ASA’s terms, and to their credit, the ASA do end up upholding their end of the bargain, erasing every person’s records on the team, and handing Jefferson all of their information on Painkiller. It’s interesting to see the ASA once again have their interests align with Jefferson here, even as they prepare contingencies that wouldn’t mesh with Jefferson’s ideals. This helps prevent the ASA from descending into cartoon villainy in this case, which they’ve threatened to do at several points this season, plus the introduction of Sergeant Grayle to the series has also helped that issue nicely.

That being said however, too many of the conflicts in this episode still feel undercooked, and don’t get utilized to their full potential. It seems like Black Lightning is using this episode’s core story arc to start teasing a debut for the Arrowverse’s rendition of DC Comics superhero team, the Outsiders next season, which is probably why Brandon and TC have suddenly developed connections to obscure DC superheroes, Geo-Force and Technocrat, respectively. I guess the Arrowverse’s new Earth-Prime lore is just forgetting about a non-metahuman version of Geo-Force being murdered by Malcolm Merlyn during the first season of Arrow then. Regardless, some of the interactions between these characters are kind of fun, but none of their character conflicts matter at this point. That kill order that was chipped into Erica’s head? TC just gets rid of it. Brandon having a fear of flying? Khalil just knocks him out. Khalil wanting to flee Freeland? He changes his mind just because. Even Brandon eventually confronting and trying to kill Dr. Jace is pointless, since Grayle just knocks him out before he can do it. Actually, Brandon’s entire purpose in this episode seems to simply be being threatened, and then being knocked out, which is pretty underwhelming.

Fortunately, like I said, the climax of this episode is well worth it, finally giving us some more much-needed superhero action for a Black Lightning season that’s been disappointingly lacking in it. The siege on Markovia’s laboratory is very thrilling to watch, and while some of the cheesy direction can be a bit much (got to love The CW and their low-rent effects), the action is generally pretty good here. The confrontation between Khalil and Gravedigger is especially neat, even if both of them survive to fight another day. It’s also really enjoyable to see Jefferson being forced to rescue his arch-nemesis, Tobias, and get predictably taunted by Tobias all the while, now that he knows Jefferson’s secret identity. With Lynn also making herself accessible, and using her temporary telepathic powers to incapacitate Mosin, it appears that the mission is successful, and everyone gets away, until Gravedigger manages to corner everyone on the rescue chopper. Even this is pointless however, since Jefferson just knocks Gravedigger out, despite being blasted by a high-powered weapon several times just a minute beforehand, in a capture fake-out that’s too annoying and contrived to really land.

Even with Lynn, Tobias and Dr. Jace finally able to return home however, Markovia’s humiliation only seems to have set the stage for a furious final attack on Freeland, something that will no doubt unfold during the ‘Book of War’ story pod to come, which appears to be the final story pod of the season. Black Lightning is taking a week off before that though, which is probably a good idea, since it will help build some added suspense regarding just how Markovia will strike back at the show’s heroes. “The Book of Markovia: Chapter Four: Grab the Strap” at least managed to conclude the uneven ‘Book of Markovia’ story pod on a relatively exciting note, though the increasing Outsiders teases still feel like they don’t have enough time to really work in a season narrative that’s getting pretty busy. I imagine that both the debut of the Outsiders and Lady Eve’s return will be key plot elements on Black Lightning next season, but for now, a swift reprisal from Markovia should hopefully allow the current season to enjoy some added excitement before it finally ends.