The Flash is finally delivering on a long-teased scenario for Ralph, who is making his return to the series for the first time in 2020. Of course, in Ralph’s defense, he’s been very busy seeking out the missing Sue Dearbon, and finally, Ralph’s search will bear fruit in this week’s episode. “A Girl Named Sue” finally properly introduces Sue Dearbon, Elongated Man’s faithful and tragic wife from DC Comics lore, into the Arrowverse, when Ralph’s investigation happens to chance upon her in an explosive-rigged apartment! While Ralph is sorting out that mess, Barry and ‘Iris’ also pursue their own separate investigations into Black Hole, while the real Iris ends up making a friend in her new home.

This marks a pretty busy episode for The Flash, with Ralph actually taking center stage this week, while most of Team Flash enters a supporting role. Frost and Allegra even sit out this episode entirely, which might not be a bad thing, since it helps the series stay focused here, even with so many key developments and payoffs being realized. Chief among these, like I said, is Ralph finally finding Sue, who, as it turns out, is being targeted by an arms dealer named John Loring. This will naturally raise some serious questions from DC fans, since The Atom’s mentally ill wife, Jean Loring is responsible for murdering Sue Dearbon in the DC Comics Universe, which served as the inciting incident of DC Comics’ 2004 event storyline, Identity Crisis. There’s even some winking teases to Identity Crisis in this episode, not just with the arms dealer’s identity, but also when Barry has to clear up a case of, “Mistaken identity” towards the end.

Obviously though, if Identity Crisis were to unfold as a crossover event within the Arrowverse, it probably won’t be for a couple of years, at the earliest. So, for now, Ralph gets to be taken along on an adventure with Sue, and it really is an entertaining one! Sue is a fun character, having a worldly charm and a surprising proficiency with combat. Sue also plays very well off of Ralph, who has since become more of an optimist, and is learning to try and see the best in people. Sue, on the other hand, is very much a survivor, and almost an intentional callback to Ralph’s abandoned, pre-Elongated Man self. This creates a really compelling dynamic between the two, especially when Cecile points out Ralph’s and Sue’s romantic chemistry, even if this won’t come as much of a shock to DC fans, who would likely know that Ralph and Sue were/are married in the DC Comics Universe, depending on which era you’re reading.

If things seem a little too good to be true with Sue though though, it’s because they inevitably are. After helping Sue finally get ahold of evidence that could help put away Loring and his goons, Sue locks Ralph in an electrified cell, revealing that she was actually after Loring’s prized diamond! It turns out that Sue was playing Ralph the whole time, which does an okay job of toying with viewers’ expectations, even if this twist is a little bit telegraphed through Sue’s personality. Regardless, Ralph gets free via the fire sprinklers, and manages to protect Sue from harm when Loring inevitably meets her outside of the bank vault, but Sue nonetheless gets away, with Ralph declaring after Barry takes down Loring and his men that the affair with Sue is not yet over. Sure enough, Sue isn’t just after money as well, being a rich socialite and all, and is seemingly provoking Black Hole intentionally, as revealed by markings on the diamond. So, Sue somehow fits into the mystery of Black Hole herself, and that’s great, because it will provide a strong excuse to pull Ralph into Team Flash’s battle against Black Hole throughout the rest of the season.

Iris also managed to anchor a fairly solid storyline this week, even if it was primarily set up to introduce another character that we all knew had to be coming to The Flash eventually. After spending some time in the world of the mirror, Iris meets Eva McCulloch, who has been trapped in the mirror world for six years, and is just barely clinging to sanity. Iris and Eva trying to work together to escape the mirror, while Iris tries to inspire Eva not to give up hope, makes for some solid story material, even if these two characters are predictably left to tread water for now. Eva learning that she can control the mirror that peers into the real world is a promising turn however, one that seemingly foreshadows Eva becoming her own villainous Mirror Master incarnation at some point in the future.

Finally, Barry was tasked to do some busy work for Joe this week, which more or less felt like a convenient way to keep him busy, while Ralph inhabited most of this episode’s spotlight. Truthfully, the Barry material isn’t that interesting this week, since he merely gets sent to a crime scene to figure out the obvious, namely that Black Hole has wide reach, and a lot of people in their pocket. Oh, and they’re still using the new Doctor Light to do their dirty work, naturally. In any case, there’s supposed to be another subplot with Barry struggling with the idea of trusting ‘Iris’ with the Mirror Gun, but he inevitably capitulates in the end, so this subplot isn’t too interesting either. It’s the growing dread with Nash that proves to be a lot more compelling in fact, after he bumps into ‘Iris’ within the ‘Starchives’, and we see that the Harrison Wells hallucinations have now begun to speak to Nash, and torment him. Could Nash be a memory-wiped rendition of Eobard Thawne? I’m beginning to think it’s likely, especially since we know that Thawne was weirdly absent during the Crisis on Infinite Earths crossover event, despite seemingly teasing at the end of last season that he would be part of it. Was Thawne actually Nash/Pariah the whole time? 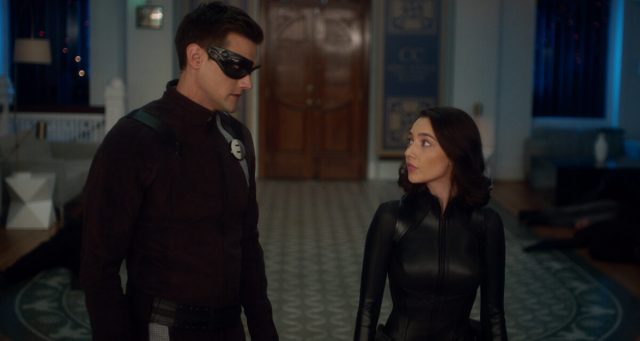 Barry and Iris may not have achieved much forward movement this week, but, “A Girl Named Sue” nonetheless provided a fun and memorable introduction for Sue Dearbon, who manages to get one over on Ralph, while seemingly having her own agenda against Black Hole. The mysteries surrounding Black Hole appear to deepen every week on The Flash, with Eva and her company seemingly tied up with them as well, and potential moles in the CCPD also appearing to carry out tasks for them to boot. As much as Ramsey/Bloodwork also provided a compelling threat during Season Six’s front portion in 2019, Black Hole feels like a threat to Team Flash that’s on a whole new level, seemingly being tapped into everything, and potentially anyone. All the while, the latest ghost of Eobard Thawne appears to haunt Nash, who’s no doubt carrying his own sinister secrets, likely serving as more impending danger that managed to survive the destruction of the multiverse.

The Flash 6.12: "A Girl Named Sue" Review
The Flash provides a strong, Ralph-focused storyline with the proper introduction of Sue Dearbon this week, even if the show had to awkwardly sideline Barry in the process.
THE GOOD STUFF
THE NOT-SO-GOOD STUFF
2020-02-20
83%Overall Score
Reader Rating: (0 Votes)
0%